This is a guest blog post by Matthew Kirkpatrick, who teaches at Wycliffe Hall and at the University of Oxford.

The Westminster Faith Debate series last autumn on ‘The Future of the Church of England’ finished with a session on ‘What does the Church of England offer the next generation?’ And no more important topic could perhaps be chosen as numbers in the church continue to dwindle. The panel was made up of well-known figures within the church including Diarmaid MacCulloch, Vicky Beeching, Rosie Harper, and Christina Rees. Although the debate was not designed to be representative of the diverse voices across the Church of England, many of the themes touched upon would have received wide sympathy.

Without wishing to oversimplify their words, the four central themes were as follows: (1) the church must seek forgiveness for its guilt in having remained silent in the face of injustice (in this instance, to the homophobic actions of some in the Anglican Communion); (2) the ecclesial reigns must be handed to the youth to discern the shape and content of their future church, without the prejudices of the older generation limiting their vision; (3) the church must strip away the ‘religious’ elements of its life that stand as a barrier to the next generation in terms of what they can relate to and find meaningful; (4) and finally, whilst retaining its symbolically important cathedrals, individual churches should meet in people’s houses and relinquish their old buildings which are both financially and missionally crippling, joining perhaps even with other denominations to meet the needs of the community.

Each of these penetrating visions offers the church a rightful challenge that it must answer. However, what I found striking, and this will belie unashamedly my own academic training, is that each of these independent concerns sit at the heart of the prison theology of Dietrich Bonhoeffer, murdered in Flossenbürg prison for his role in the German resistance. Written at the crescendo of the Second World War, Bonhoeffer’s circumstances were markedly different from those of us sitting comfortably in the grandeur of Oxford’s University Church. However, each panellist had unwittingly picked up on one of the major themes that Bonhoeffer addresses.

As Bonhoeffer surveyed Europe from his prison cell, the guilt of the church was all too apparent. The church had failed to speak up for the voiceless and counter the injustice that it saw all around. It had lost itself in its own theology, crippled by its affirmation of the status quo and the autonomous rights of the state, and rendered woefully unprepared by years of inactivity. However, it had also constructed a form of “religion” that failed to recognise the changing needs and identity of the people it claimed to minister to. While in his youth this was perhaps limited to the predominantly bourgeois church’s failure to engage with the proletariat, so now it gained definition in the structures of its life that it required people to conform to for faith and fellowship to be received. Bonhoeffer summarizes both of these actions under a single guilt: that the church had fought for its own survival. It had not only kept its head under the parapet in the face of danger, but in the face of a world that was changing and becoming more mature, it had belligerently insisted upon forms and structures to its cultic life that made it not only distinctive but also essential. Bonhoeffer was not trying to eliminate specific elements of a church’s liturgical or communal life, but rather to ask honestly, what do preaching, liturgy, community and church life more generally look like in a “religionless Christianity.” What are the essential elements of faith in Christ, and what simply the hoops of an outdated institution?

As a response to this guilt, Bonhoeffer argued that the church of his generation had lost the right to speak in the name of Christ. Like the Hebrews wandering in the wilderness, his generation could not enter to promised land. They must confine themselves to prayer and acts of justice. It is rather for the next generation, as yet untarnished, to re-establish the church in a new way, with a new language that will be shocking, perhaps, but also liberating and redeeming—as it was when Christ spoke. When Bonhoeffer considered what the church might look like he argued that it must “share in the problems of secular life,” and perhaps even give its possessions to those in need, to live and work at the heart of the community and be sustained by it. However, as the body of Christ, its identity could only be established by being “for others.” 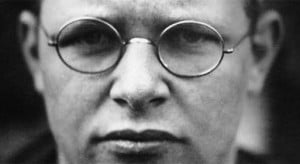 The importance of bringing Bonhoeffer into the discussion is not simply to point out curious similarities, or even just to suggest that Bonhoeffer’s vision remains relevant to the church (which I think it is). It is rather to allow Bonhoeffer to question the positions that bear something of his image. What was very noticeable in the panellists’ presentations was that no one actually engaged with the precise question being discussed—what does the Church of England offer the next generation—not what it should, could, or might do. So much energy was spent on saying what was wrong with the church that nothing was left to say what was right. With one panellist suggesting that in their reforms “everything’s up for grabs,” the question must be “What does it mean to be the Church of England?” “How much can be changed before it loses its essential identity?” Bonhoeffer did not have time before he died to give examples of what he might consider “religious” elements that could be struck from church practice. However, at the heart of his theology lies the notion that cutting away dead elements from something and redefining its limits is not so much to focus on what is wrong with it, but rather on what is essentially right, in order to bring it back to life. So what is this for the Church of England? Why should the next generation be Anglican, as opposed to another denomination that may already answer the panellist’s criticisms much better?

It is doubtless crucial for the Church of England to reconsider its form and presentation, but it cannot do this until it has established what its essential core actually is, and made every effort to communicate and inspire the next generation to its identity. Unfortunately, many of the panellists remained so unified on their desire for radical change, that the real debate about what this core might actually be rarely reared its head. So is there something about the church’s liturgy and worship, its structure and communion, its history and heritage that remains important? If so, is the radical task not to discard these in the name of modernisation, but to excite those to whom they appear foreign? Several times during the proceedings, the discrepancy between the beliefs and opinions of the clergy and those of the laity were noted—evidence again of a church that is lost to its academics and fatally disjointed from its people. But is the radical task, therefore, to give the church up to the people, or to inspire those same people about the riches, dynamism, and truthfulness of the doctrines and Scriptures that lie behind it?

As the church considers its future, one thing is certain: it must not fight for its own survival. Perhaps it will have the strength to realise that there is, actually, nothing distinctive about it that truly needs preserving amongst the denominations, and will show the greatest sacrifice for others by facilitating its own demise. Or, perhaps, it will understand that there is something about the Church of England as the Church of England that is important—something that is not worth fighting for in itself, but which is so crucial to its illuminating truth, so essential to its gospel message, and so intuitive to its mission, that it becomes the foundation of its fighting “for others.” But have we given up on this task? Doubtless reform is needed. But what is the core on which it must be founded? Are we so clear on our own ideas of what needs changing that we can no longer see what doesn’t? Perhaps we still need to ask: What does the Church of England offer the next generation?

7 thoughts on “What does the C of E have to offer the next generation?”