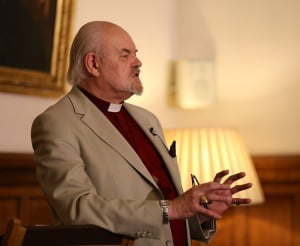 A few years ago I was in conversation with someone who had been in theological education, but was now returning to parochial ministry. ‘I am going to go and grow a church’ he quipped; ‘It’s not that hard.’ He was heading to an inner urban area, and whilst I admired his optimism, I winced at his hubris. I thought afterwards (as one always does) of what I should have said at the moment: ‘Yes, it is easy. All you need to do is give yourself completely, submit to crucifixion, and be resurrected on the third day. After that is it all quite straightforward.’

In light of that, I was fascinated to read the text of the third Lambeth Lecture delivered by Richard Chartres, the Bishop of London, and church growth in the capital. It is long—very long at 9,102 words, almost the length of a full Grove booklet. If read in full, it must have taken an hour and a quarter to deliver, but there are enough poetic pictures, moving metaphors and startling revelations to have kept listeners fully engaged. For the wider church, the interest in what Chartres says does not lie in reproducing the ‘London experience’; he is quite aware that ‘hostility to London in other parts of the UK is a significant political fact’ and that ideas cannot simply be exported. But there were several things in the speech which struck me as of being of vital significance to any diocese which is committed to growth

The speech opens with a brutally honest account of the dire situation facing the diocese in the 1980s, and what that meant both in parishes as well as across the organisation.

The parish of which I became Vicar in 1984 was an extreme case study of these general trends. St Stephen’s Rochester Row in the mid-1980s had already experienced twenty years of decline. At the beginning of the social revolution in the 1960s there had been about 550 members on the electoral roll and an assistant staff of 6 curates and four nuns. There was even a daughter church, St John’s, the result of a 1950s church plant. By the time I arrived as the Reverend Mr Ichabod – “the glory has departed” – there was an average Sunday attendance of 40, no assistant staff and the daughter church had been turned into the HQ of the London Diocesan Fund.

In one sense, it is easy to be honest about the past when looking back. But it seems clear that Chartres was aware of the situation at the time, and his piece continues to be honest about the struggles he has faced in bringing change, including initiatives which haven’t been very successful and which needed to be dropped. And the purpose of this honesty is not to be morose, but to protest that it doesn’t have to be this way. A realism in facing what is happening has become an engine for change.

Chartres offers a fascinating account of the process of simplifying structures within the diocese. The Area scheme has become an obstacle to unified action and had added layers of administration, so needed rethinking. And the various Boards were creating talking shops which did not lead to action and implementation.

One of the first tasks was to carry though the abolition of the extra tier of synodical government and all the Boards not protected by law. The crucial changes were effected by 1997. At the same time we amalgamated all the statutory bodies with the Bishop’s Council. No one has ever said to me “if only we had a Board of Mission we would have done some mission”. Instead a black hole of energy was closed and, as a result, effort directed to supporting those individuals and places which signalled life and possessed the missionary gene.

In all this, Chartres has an interested mixed reception of management insight. On the one hand, he appears to be highly sceptical about proposals in the Green Report on developing senior leadership in the Church:

An MBA in ecclesiastical administration is no substitute for the development of a beginner’s mind and acquiring the teachability with which the Spirit can work. I do not doubt that we can learn much from the experience of other organisations, but the church should also have a non-exclusive confidence in its own experience.

On the other hand, he is very open about the insights that the diocese have gained from the use of consultants (not least in the area of communication) and individuals who have brought management expertise to the running of the diocese. And he is committed to a proper understanding of mutual financial support; the Common Fund must not be a ‘tax on growth’ as it has so often been.

One of the most striking things about the speech is the consistent generosity which with Chartres refers to those he has worked with, even when they are very different from himself and might have made some errors in the past.

Any Diocesan should be clear about his incompetencies and mine were only too obvious. In particular, when I sometimes feel that I have made myself clear what others have heard is often opaque and occasionally baffling. Pete Broadbent is direct and unvarnished in his communications. He has vast experience as a member of Islington Borough Council and as a serial Synodsman. In style and political convictions he is a contrast to the Diocesan, but the partnership works because we are committed to the common cause.

I haven’t counted them up, but I think there must be a dozen or more people praised by name in the speech. I am slightly reminded of Paul in Romans 16, listing the 27 people to whom he owed a debt of gratitude arising from partnership in mission and ministry. Chartres is, physically, a large and imposing presence. But he clearly has no anxiety that he needs to make himself bigger by making others look small.

Some of Chartres’ most startling comments arise in his affirmation of theological traditions very different from his own—and his impatience with those who would hesitate to partner with them. Not surprisingly, Holy Trinity Brompton in particular, and charismatic evangelicals in general, take a central place in this.

One such place was Holy Trinity Brompton whose leaders had experienced a measure of frustration in their dealings with the Kensington Area hierarchy. Alpha was beginning to develop into the global movement that it is today, and there were voices within HTB urging that a base outside the Church of England would be more conducive to growth. The local hierarchy was unwilling to see HTB as much more than a conventional parish in the Area, and in particular was keen to restrict the numbers of curates that the Church could employ, even though there was finance available to enlarge the staff. The restrictions were fuelled by a liberal distaste for charismatic evangelicalism and a conviction that the supply of curates should be evenly spread throughout the Diocese, irrespective of the capacity to pay.

For someone firmly committed to the Catholic tradition in the Church of England, it is remarkable to read him quoting Rick Warren, ‘the American Mega-Church leader’, and affirming the work of the 24/7 prayer initiative. But there is an important qualification here. Whilst he wants to encourage the contribution of Conservative Evangelicals (though it is hard finding those ‘who are capable and willing enough to work constructively across the whole gamut of church life’) he has no time for ‘extreme churchmanship factions’ and is only interested in working with the ‘legitimate strands’ of tradition.

One of the underlying principles of the past twenty years in London has been that every legitimate strand in the Anglican tradition should be honoured and reflected in the appointments made in the Diocese. There is only one vital distinction which transcends the differences between different strands of churchmanship and that is the distinction between dead church and living church.

This is a healthy antidote to those who claim they believe in a ‘broad church’ without any qualifications.

I am not sure that the bishop has an equivalent of Alex Ferguson’s ‘hair drier’ treatment, but at points he comes across with a sense of steely determination to push through change in the face of opposition.

There was, and continued to be, active opposition from certain Area teams to any common framework. Publically expressed and constructive criticism should always be welcome, but subversives, “weevils of the commonwealth”, those who damage morale by cynicism and gossip have to be weeded out. Bishops need a reliable intelligence system, and the resolve to deal with serial nay-sayers.

If I were in the diocese, I think I would be wary of crossing him!

Chartres offers a fascinating insight into his own reflections on being a bishop, and they are remarkably refreshing. Despite his evident love of ceremony and his personal gravitas, the comments suggest a post that (at some level at least) is lightly held. The bishop is the one person who can have an overview of the bigger picture, whilst also needing to ensure things get done—’implementation’ is a repeated mantra. But the bishop is not the answer to everything.

Growth springs from movements of the Holy Spirit, and from communities and individuals in whom there is life-giving sap. Bishops can do very little alone. They can seek to remove obstacles, and to make wise appointments. Pronouncements can usefully change an atmosphere, but too many “Diocesan initiatives” can be a distraction and contribute to weariness and even cynicism among the clergy, especially if they suspect that the bishop is trying to make a name for himself.

When my name survives only in a litter of plaques marking school extension openings and the refurbished loos at St James’s Clerkenwell, I am convinced that future Bishops of London will be able, with Haggai, to say, “the glory of this latter house shall be greater than of the former saith the Lord of Hosts.”

Chartres also offers a welcome reflection on the role of tradition.

Traditionalism is the obstinate adherence to the mores of the day before yesterday – the dead faith of living people. Tradition is the spirit-filled continuity of the Church’s life, through which the truth is communicated from generation to generation in fresh ways in order to stay the same. Tradition is the living faith which we share with dead people. Actually often the hardest task is to persuade yesterday’s avant-garde that they are today’s busted flush.

If diocese and parishes could learn from these principles, growth might come in surprising ways.

2 thoughts on “What does it take to grow?”