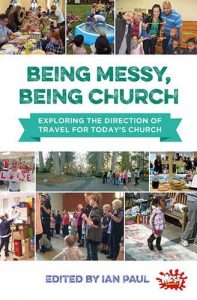 I am very excited to announce that the book on Messy Church which I have contributed to and edited is out this week. Being Messy, Being Church includes a wide range of reflections from some fascinating contributors (including three bishops and contributions from Switzerland, South Africa and Australia) and tackles key practical, pastoral and theological questions around Messy Church. How does MC sit with Sunday church, and how does it relate to the sacraments? What impact does MC have on the faith of team members? What are the practical dangers and pitfalls, and how does MC offer opportunities for pastoral care? How does MC engage with postmodern culture, and can it play a part in evangelism? What missional structures does MC need as part of the wider church? and many others.

Lucy Moore, in her foreword, comments:

An email came round recently, from a member of the BRF Marketing team, asking if we had a generic word to describe books like Messy Church Theology, Messy Hospitality, Making Disciples in Messy Church and Messy Togetherness. They said, ‘The word we use in-house is thinky books, but we can’t really use that in public…’ Well, Being Messy, Being Church certainly fits into the series of ‘thinky’ books! We are deeply grateful to Ian and all the authors who have put so much thought into their fields over the years and have had the grace and skill to apply that thinking to Messy Church in such an accessible, generous and wise way, to help us all to think.

I came across a word this morning in the context of reading about the wisdom of God in Ephesians 3. The word is ‘phronesis’, a fine and noble-sounding word that one can pronounce with a slight elevation of the chin, as it feels so lofty and impressive. ‘Today I shall set out to be phronetic,’ we may chant as we get up each morning. It’s the word Paul uses for insights that help us live out the wisdom of God in a practical way. I would offer the concept of phronesis to Messy Church team members as a happy attitude to have in mind as we read the collected wisdom and experience in these chapters. In other words, there’s a lot of theory in these pages, and it’s our job as Messy Church practitioners to let that exciting theory sift through our grounded, hands-on experience and, with the cooperation of the Holy Spirit, transform us and our actions.

Messy Church is firmly associated with practical wisdom; the outworking of discipleship; the living out of faith; and the mucky hands of disciples serving communities by washing up, sweeping up, peeling potatoes or creating works of art from the stu of the earth and noxious explosions from chemicals. It is the applied wisdom of a lifetime of following Jesus, so that when we sit alongside a family, surrounded by planks of wood and screwdrivers, we know how to respond to the unexpected question about God—and we know how not to reply. After all, what would you say to an eight-year-old with autism who listens carefully to your introduction to the yoghurt-pot-based activity at Easter time, about Jesus’ death and resurrection changing the world for ever, and then politely asks, ‘Exactly how did Jesus change the world for ever?’

The huge themes and questions dealt with in the chapters of this book will challenge our attitudes and ideas and encourage us to do what we do even better in our Messy Churches—to get on with the phronesis with renewed vision.

The contents are as follows:

The stimulating mix of practical and theological reflection will help anyone involved in Messy Church think through both the challenges and the opportunities.

The Kindle edition is available now; the print edition is released on Friday. It is also available on the BRF website. Archbishop Justin Welby commends it as follows:

A timely book offering theological insight and asking probing questions into the creativity, mess and gift of an extraordinary phenomenon. A challenging and inspiring read for those leading, helping or simply wanting to understand more.

9 thoughts on “(What) do we think about Messy Church?”