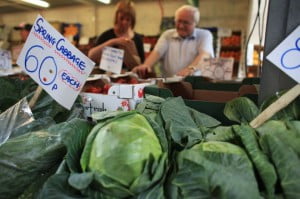 It is a well-known fact that membership of the EU has mired us in a quagmire of regulation created by faceless bureaucrats who impose their unelected agenda on poor British people, inhibiting our lives and business with absurd rules. The classic example comes in this analysis of the words in various documents:

There you have it. We would clearly be better off if we were out of Europe and could decide for ourselves on our own cabbage-growing requirements.

Except that it isn’t true. As the BBC’s More or Less demonstrated this week, this example is a complete fabrication—and, bizarrely, the number 26,911 goes back to a statistic quoted in 1945, before the EU even existed! There used to be some regulations on vegetable sizes and forms, but the EU sensibly decided to abolish them. In fact there are some regulations about the growing of cabbages, and they run to 23,510 words—and they are written in Britain by a British farmer as part of the British Red Tractor assurance scheme.

This illustrates a worrying reality about the debates on the EU in the run-up to the referendum: not many voters will be making a well-informed decision based on the facts, not least because they are often so complex and speculative. The Economist highlights the dangers:

…Voters will be influenced not by a cool calculation of costs and benefits but by their general view of Europe. And in the midst of a huge refugee crisis and stuck in the economic doldrums, Europe does not look inviting. Referendums are always unpredictable: a sudden shock in the markets, or even a terrorist incident, could swing voters. There is all to play for.

This is the disturbing conclusion to an article that focuses on the serious dangers around possible Brexit in a whole raft or areas—free trade deals, which are unlikely to include services so vital to our economy, freedom from regulation, which likely won’t materialise, immigration, which cannot be controlled without sacrificing trading arrangements, security, diplomacy and sovereignty. In purely economic terms, it doesn’t look good.

The immediate effects of a Brexit vote are likely to be bad. Prolonged uncertainty over Britain’s new relationship with the EU will discourage investment, especially foreign direct investment, of which Britain is the biggest net recipient in the EU. This is particularly worrying for a country with a large current-account deficit that must be financed by capital inflows…

The longer-term effects of Brexit are also likely to be adverse.

It has been argued that the EU will want to give a post-Brexit UK good terms for trade. But that looks wildly optimistic.

The incentive for other EU countries is not to act with generosity. A decision to leave will be seen by many as a hostile and destabilising act for a union that is already in deep trouble. Voters across Europe are disillusioned with Brussels. Populist parties in France, the Netherlands, Italy and elsewhere are watching the Brexit debate closely. The EU will be desperate to show that a decision to leave does not have a painless outcome…

The idea that we will have leverage in future trade deals ignores the fact that the relative importance of trade to the UK and to the EU is completely asymmetric.

…[It is] asserted that both sides have a strong interest in a free-trade deal. This is true but any deal is unlikely to cover services. The second is to claim that, because Britain runs a big trade deficit with other EU countries, they need the British market more than Britain needs theirs. This is a fallacy: Britain accounts for only 10% of EU exports, while the EU takes almost half of Britain’s. Moreover, most of the British trade deficit with the EU is with just two countries, Germany and Spain—yet a trade agreement must be endorsed by the other 25 members too.

The Confederation of British Industry (CBI) develops the case for remaining in the EU on the basis of trade deals. Being in the EU gives us easier access to global markets, includes us in more comprehensive deals, to more other countries, and on more favourable terms, with lower tariffs, and in a shorter time, and thus boosting the economy, than any deals we could strike on our own. The final paragraph looks to the future.

Priority must be given to completing the deals with Japan and the US – giving UK business easier access to 2/3 of the world’s markets by value. The EU-US deal (TTIP) could add £10bn to the UK economy by attracting more investment, cutting red tape and increasing consumer choice. The deal would also set the bar for regulatory standards around the world.

Have you heard of TTIP? That’s right, it is the trade agreement which it is claimed will fundamentally undermine our services, jobs and even our democracy.

As a bi-lateral trade agreement, TTIP is about reducing the regulatory barriers to trade for big business, things like food safety law, environmental legislation, banking regulations and the sovereign powers of individual nations. It is, as John Hilary, Executive Director of campaign group War on Want, said: “An assault on European and US societies by transnational corporations.”

TTIP is the end point of the logic unleashed by Margaret Thatcher’s embracing of Friedman-style free market economics, the thing responsible for our rapid growth in wealth, growing inequality, and the destruction of much of our common life as a nation.

The coffee and the restaurants are better – but the essentials of life are harder to find than ever: a good life and an honest place; a solid, modest home big enough to house a small family in a peaceful, orderly landscape; good local schools open to all who need them; reasonably paid secure work for this generation and the next; competent government and wise laws. These have become luxuries, unattainable for millions who once took them for granted.

And ‘because we’re all still worshipping that free-market dogma that captivated us 30 years ago’, we have seen the end of our coal industry and are now witnessing the end of our steel industry, which the Government could perfectly easily rescue if it wanted to. It is the reason that the NHS is being bled dry by private companies through the PFI process—which Jeremy Corbyn admits was Labour’s mistake. And it is the reason why indigenous white boys perform measurably worse at the end of their schooling than they did at the beginning—free market economics and individualism have destroyed the culture and communities on which previous generations depended.

In this sense, important though it is, the debate about membership in the EU feels like rearranging the trade deal chairs on the deck of the Titanic of free market economics. The much bigger question, which isn’t really being addressed, is what our free trade fixation is doing to our lives and our world. 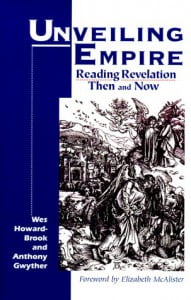 It should not completely surprise us when commentators like Anthony Gwyther and Wes Howard-Brooke draw parallels between the beast in the Book of Revelation and global capital. In Unveiling Empire, they identify the depiction of Roman imperial power in Revelation and the claims it makes—to be the true source of prosperity, the end of chaos, the controller of financial, the true victor in the struggles of the world and the one that will last for ever. Onto that they map the similar claims made by the ideology of global capitalism, which therefore commands our unquestioning allegiance. (What is the political response to any party which questions free market economics? They are irresponsible and unelectable!) And they highlight the way that the kingdom of God and its looking-as-though-he-was-slain king unmask such claims for what they really are—a deceptive counterfeit that tramples the people of God, comes under judgement and ultimately destroys itself.

To remain in Europe or to leave might well be a choice between the devil you know and the devil you don’t. But in the end, without more fundamental questioning of the situation we are in, I suspect it will turn out to be the same old devil.

9 thoughts on “The sobering truth about Britain and the EU”