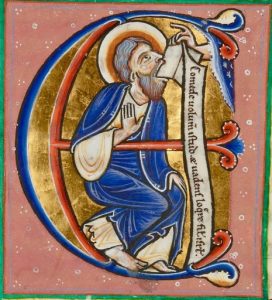 Why does our experience of Christian life often seem so contradictory? Why do we so often seem to move from experiences of triumph and wonder to experiences of doubt and failure? (I have a sense that this is a universal question, and not just a function of my getting older and more jaded…) An answer can be found in a curious textual detail in the Book of Revelation.

In the second interlude to the series of seven judgements, in Rev 10 (the first interlude is Rev 7), John is handed a scroll which he is to eat.

Then the voice that I had heard from heaven spoke to me once more: “Go, take the scroll that lies open in the hand of the angel who is standing on the sea and on the land.” So I went to the angel and asked him to give me the little scroll. He said to me, “Take it and eat it. It will turn your stomach sour, but ‘in your mouth it will be as sweet as honey.’”  I took the little scroll from the angel’s hand and ate it. It tasted as sweet as honey in my mouth, but when I had eaten it, my stomach turned sour. (Rev 10.8–10)

There is much debate about how this ‘little scroll’ relates to the scroll in the right hand of the one seated on the throne in Rev 5. I am not persuaded by those who think it is the same one, since John uses a different word for it (biblaridion instead of biblion) and introduces it without a definite article (‘a little scroll’) whereas he consistently refers back to things that have already been mentioned with a definite article (e.g. ‘the scroll’). But the two are closely related, not least in the way they are presented. The mighty angel ‘was holding a little scroll, which lay open in his hand’ (Rev 10.2) and we first meet the scroll of chapter 5 not ‘in the hand’ but ‘upon [epi] the hand’ of the one seated on the throne (Rev 5.1) as if it is held out, to be taken. If the first scroll reveals the will of God for the world, then the little scroll represents the task of communicating his will; as soon as John has swallowed it, he is commanded to ‘prophesy again about many peoples, nations, languages and kings’ (Rev 10.11).

But what is fascinating here is the way that John makes use of the OT background. The idea of taking and swallowing a scroll comes directly from Ezek 3.3. so much so that some English translations put quotation marks around the phrase ‘in your mouth it will be as sweet as honey’. But John makes two changes in using the text from Ezekiel. Firstly, Ezekiel is told not to speak to ‘peoples of strange tongues’ but only to the house of Israel, where John must prophesy to ‘many peoples…and tongues’. Even more striking is the contrast between Ezekiel’s experience and John’s. For the former, the scroll is sweet-tasting, but for the latter, whilst it tastes sweet in his mouth, it is bitter in his stomach—an idea that John has added as an entirely novel aspect of the trope of swallowing. And it is emphasised in the text by its chiastic repetition (‘stomach sour…mouth sweet…mouth sweet…stomach sour’).

There are quiet a few examples of holy people being given sacred food or objects to ingest in the ancient world, and that such ingestion allows them to speak words of holy wisdom. But none of them offers any kind of close parallel to this account in Rev 10; we can interpret this entirely in its relation to the idea in Ezekiel.

John’s adaption of the Ezekiel text is entirely characteristic of his use of the OT. In general terms, John is continually adapting OT ideas and reinterpreting them in the light of what God has done in Christ and his visionary experience of that. But in particular, he consistently ‘dichotomises’ them, so that where they might mean one thing in the OT, in his adaptation they not only mean something else, but they might even mean both the same and the opposite at the same time. So the scroll is sweet in Ezekiel, but it is both sweet and bitter for John. In a similar way (but in the opposite direction) the ‘time, times and half a time’ or three and a half years in Daniel 7.25 is a time of intense tribulation, but in Revelation (through John’s re-expression of it as 1,260 days or 42 months) it also because a time of witnessing and of God’s protection. The anticipated anointed deliverer (‘messiah’) will be a lion from the tribe of Judah (derived from Genealogy 49.9), but in Rev 5.5 the lion is a lamb—the all-powerful conquering champion is a suffering and slain victim. You can find the same dynamic in the messages to the assemblies in the seven cities; the exalted Jesus brings a message which you might think offers encouragement, but it brings stern warnings to many of the readers, and even to those who are without rebuke, the word is often ‘You are going to suffer, but that’s ok.’ And this sense of paradoxical dichotomy continues right through to the end. The New Jerusalem has its gates open day and night, so that no-one is ever refused entry (Rev 21.25) but entry will be refused to anyone who does what is shameful or deceitful (Rev 21.27); the city is both radically inclusive and radically exclusive at one and the same time. And John himself shares in fellowship with all those who follow the lamb both the ‘kingdom’ and the ‘suffering’ that are ours in Jesus (Rev 1.9).

It would be possible to suppose that at each of these points, John was simply being inconsistent and contradictory, and in the past some commentators have decided that there are multiple texts which have been patched together rather badly for just that reason. The problem with this idea is that this ‘dichotomising’ is a completely consistent feature of the text. Like an impressionist painter, John creates the overall picture using a large number of different brushstrokes. Each brushstroke, each individual piece of text, includes this idea of dichotomy and paradox, and it creates an overall picture which says ‘To be a follower of the lion/lamb is to live a paradoxical life, one of victory and suffering, one of triumph and defeat, one of acclaim and vilification.’

In doing so, John is emphasising something that we find all through the New Testament, though elsewhere in a more muted form. Paul’s understanding of Christian ministry in 2 Cor 4 is that it is both life giving and death dealing: ‘So then, death is at work in us, but life is at work in you’ (2 Cor 4.12). But the contradictions are true for all disciples, not just leaders. The radical freedom we have in Christ can easily enslave us if we use it to indulge our ‘natural’ instincts, and we only experience it as freedom if we allow it to lead us to the disciplined life of conformity to the Spirit (Gal 3–5). And when Paul is preaching, he talks of the power and purpose that comes from ‘the good news about Jesus and the resurrection’ (Acts 17.18), but of course he was very clear that ‘We must go through many tribulations to enter the kingdom of God’ (Acts 14.22). And in preaching in this way, Paul is simply matching the preaching of Jesus, who came to give life in all its fulness (John 10.10) but whose followers must face daily the possibility of death (Mark 8.28).

The theological reason for this comes down to the eschatology of the New Testament: the promised new age of the messiah’s reign has come, breaking into this age, but this age persists, and so discipleship always means living in the uncomfortable tension between the two. Revelation is most explicit in its eschatological focus, so this tension, expressed in the dichotomies of Christian living, are set out most clearly. But I also wonder whether Revelation paints this picture mostly clearly because it is a later text. Both in the gospels and Acts, and Paul’s letters, we are observing the process of the good news being proclaimed, so the focus leans towards the positive even whilst the counter-point of suffering is ever present. But in Revelation, Christian communities are now established, and they are wrestling with what it means to persist in the Christian life. In that sense, they are closer to our own situation. I wonder if this means that a healthy Christian congregation will always consist of a mix of those who are new to faith and those who are some way down the path—so the first can remind the second that life is wonderful, and the second can remind the first that life is hard.

5 thoughts on “The dichotomies of the Christian life”