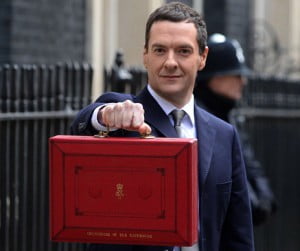 Like many people, I puzzled over the budget on Wednesday. Many were puzzled by the complexity of working out what the impact of some significant changes in both tax and welfare would be. Others were puzzled—baffled, or just plain wrong-footed—by the mix of proposals. As Nick Robinson said on the BBC that evening, there were things that would have clearly pleased Margaret Thatcher, and things that clearly would not have. Chief amongst these was the remarkable pledge to raise the minimum wage, now called the ‘living wage’, to £9 per hour by 2020. Thatcher would have seen this as an unacceptable and unwelcome interference in the market, and commentators have suggested that it will lead to real problems for business, and possible job losses—and the introduction of the minimum wage by Labour was something the Tories bitterly opposed for just these reasons.

But there is something else remarkable about this measure, along with the commitment to clamp down on tax evasion and avoidance and the loss of tax privileges for ‘non-doms’: these are lifted straight from Labour’s manifesto, and in some cases, exceed what Labour promised to do. The last thing we expected of this Conservative government was to out-Labour old Labour. As Jonathan Freedland put it rather wittily:

Like a grasping relative rummaging through the cupboard of a dying family member who lies helpless on the bed, Osborne set about stealing any item of Labour clothing that took his fancy – picking out all those with mainstream appeal.

It seems to me that, if the Conservatives are wanting to move more to the centre ground, this can only be a good thing. In some ways, this appears to be doing what Tony Blair did in the other direction in 1997. This is surely good for the electorate, as it blunts the edges of our crude first-past-the-post, all-or-nothing electoral system. In the absence of any hope of electoral reform, it is somewhat comforting that, even if the ballot box did not listen to the range of views of the people, someone in the Government has. After all, the promised cuts to welfare reform were widely unpopular; six out of 10 did not like what was proposed (the election result notwithstanding) and the same was even true of four out of 10 Tory voters.

It is not the first time this has happened. The modified austerity programme implemented by the Coalition Government took them not to the position they themselves had planned, but to almost exactly the place that Labour had promised before the previous election.

It is difficult to know what internal dynamics, in Osborne or the cabinet, led to this poaching of policy. But it was clear that Work and Pensions Secretary Iain Duncan Smith was delighted. His double fist punch as the living wage was announced went viral. Perhaps it was his own Christian convictions that had made him push for this, and compensated for criticism he has received from Christian leaders on other issues.

How would Labour respond? During the budget, they all looked like they were sulking. Not only had they lost the election; now they had even lost their manifesto. But this was the wrong reaction. Surely Harriet Harmon should have stood there, and on these three issues, proclaimed how delighted she was that the Conservatives had seen fit to adopt Labour policy. They might have lost the vote, but on these three issues at least, they had clearly won the argument. Unfortunately, to say something like this you would need to think that policies and principles were more important than party and power, and there is not often evidence of that in Parliament. For a good example of the desire for power triumphing over personal principle, have a look at Nicky Morgan’s move from opposition of same-sex marriage to campaigning endorsement in return for a cabinet post.

That would all have been interesting enough, until the analysis of the impact of the budget started in earnest. Nick Palmer, former MP for my constituency of Broxtowe, offered his own assessment:

After looking at the numbers, he offered a sobering assessment:

The economic situation remains difficult, so it’s clear to everyone that either tax increases or spending reductions are needed. But it’s striking that a huge proportion of the impact is being focused on low-income people, while high-income earners actually do rather well out of the Budget. That, to be political for a moment, is what Conservative Governments do. It’s in many people’s short-term interest, but do we really want a more divided country?

This was confirmed by the politically neutral Institute for Fiscal Studies.

Thirteen million UK families will lose £260 a year on average because of the Budget’s tax and benefits changes, says the Institute for Fiscal Studies (IFS). Tax credit changes could hit three million families, which are likely to lose an average of £1,000, it said.  Even taking into account higher wages, people receiving tax credits would be “significantly worse off”, said Paul Johnson, director of the IFS.

This does not just look incredibly unfair; it also fails to make much economic sense either. I can see the economic logic of transferring the burden of responsibility away from the welfare system and the state to employers—but there is no economic sense in doing this in a way which actually penalises people in work, or on the boundaries of work.

“It will reduce the incentive for the first earner in a family to enter work,” [Johnson] said. The IFS analysis suggests that those in work – but receiving low salaries – will be the worst-affected. Those in the second poorest category are likely to lose more than £1,200 a year. By contrast, the richest 10% stand to lose less than £400 each. And those in the second wealthiest category will be better off, by more than £100.

Just a glance at the the IFS graphic on the likely effect on different economic groups makes the impact of these changes clear.

Is there anyone out there who voted for this Government who can look at this and not shudder? Is there any possible economic or moral justification for this kind of net change in a country with already accelerating inequality between the rich and the poor?