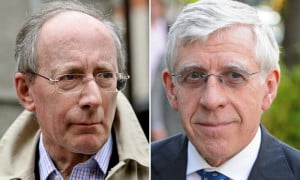 The question of MPs pay and responsibilities came to the fore again last week, with revelations that Jack Straw and Sir Malcolm Rifkind fell victim to a sting operation by newspaper who were pretending to offer payment for lobbying. This was all the more surprising given the reputation and experience of the two MPs concerned—and given that almost exactly the same thing had happened in 1998 with almost exactly the same result.

I have some sympathy with their plight, in that there are some common aspects of working as a clergyperson and working as an MP. There aren’t quite the same opportunities to work as a high-paid consultant when you are ordained (!) (although many would like this) but there is a similar sense of autonomy and flexibility. In both roles you are, in some sense, functioning as someone who is self-employed. The role specification is quite general; you do not really have the equivalent of a line manager; and your working context means that a lot of the time you are working on your own, or at least you make your own decisions about what you focus on and for how long. This means that amongst clergy, as amongst MPs, there is a wide variation on how hard people work and what you spend your time doing. (One now-retired bishop once said to me ‘Half my clergy are workaholics; the other half are lazy.)

The big difference between MPs and clergy (apart from earning power!) is that, if you are in full-time stipendiary ministry, then you need to declare all other income which is then deducted from your stipend. Some have proposed a similar system for MPs—I doubt it would ever be accepted, but it would certainly resolve the problem.

This pattern of working means that there are some common-sense facts that we need to bear in mind when considering the question of second jobs for MPs.

First, the task of being a constituency MP need not necessarily take up all of a person’s time. This is evident from the fact that, even with Parliament, many MPs have additional roles. Rifkind was chair of an Intelligence Committee; many MPs choose to be part of one of the many select committees, as this is a way to exercise influence from the back benches. And of course, any MP with a ministerial role will have significant additional responsibilities and demands on his or her time. So those without such additional responsibilities could potentially have time in their schedules for other work.

But this all depends on how much energy you put into your constituency work. When Nick Palmer was my MP (Labour, Broxtowe), I used to email him fairly frequently, and I cannot remember a single occasion when he did not reply within 24 hours. Our present MP, Anna Soubry (Conservative) is much less responsive, in part because she has a ministerial portfolio. I am still waiting for a full answer to a question one year on. And other MPs, in demanding constituencies, find the job (if they did it fully) would take more than 24 hours a day. Sarah Champion became MP for Rotherham almost by accident, and is clear she will only do it for a limited period:

You get into a cycle, you’re working really hard, so you stop seeing your friends. Then, because you stop seeing your friends you throw yourself into work and the whole thing perpetuates. At Christmas, I actually took a week off, it’s the first time I’ve had a full week off, my friends were like, ‘who the hell are you?’. Things like Twitter and 24-hour-news means you are always working. It’s horrendous. The job is fabulous. The lifestyle is living hell.

(I do wonder whether there is a difference here between men and women; men appear to find it easier to switch off and put boundaries around their work, and therefore perhaps are not in general as conscientious. Just a thought…)

Champion finishes her reflection with a fascinating observation which is pertinent to the question of second jobs.

My plan is to do another five years and then go. I don’t think it’s healthy to be there for too long. Because the longer you’re there, the more distant you get from reality. 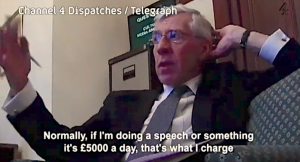 This has in fact been another common justification for the idea that MPs should be able to have second jobs—to keep them in touch with reality. It is a serious issue, with the ‘professionalisation’ of politics, and this has afflicted the Labour Party—who now consist almost entirely of career politicians, in contrast to the previous generation of Labour MPs—more than the Conservatives, many of whom have come into politics as a second profession. What I find odd here, though, is that the ‘reality’ which most want to have experience of is the reality of business and highly paid jobs. Malcom Rifkind is already earning around £250,000 a year from ‘second jobs’, and Jack Straw commented that he gets paid £5,000 a day for speaking. It is hard to imagine something that would take you further from the ‘reality’ of your constituents than this!

If reality is the issue, then why not do voluntary work in a local hospital or school? Or, for a radical idea, try living on an average wage? This isn’t about the ‘politics of envy’ but trying to put things in perspective. The basic salary for MPs, at £67,000 a year, compares well with the median income for doctors (at £71,000) and solicitors (£41,000). The reality is that many MPs spend time with people are are in the top 1%, and this seems to distort their expectations. If MPs’ pay was increased, the only likely outcome is that Jack Straw would proportionately increase his speaking fee. Within the cabinet, we are almost exclusively governed by (multi-)millionaires.

In fact, this distortion is part of a wider phenomenon in our culture—that money can (and possible should) buy you anything. Peter Oborne left the Telegraph last week out of disgust at the way the once-respectable paper bowed to financial pressures from advertising—a key one being HSBC. HSBC first withdrew advertising, and then reinstated it in return for the Telegraph cancelling their investigations and reporting on the now well-known problems of advice on tax evasion. The paper had also taken out a £250m loan from the bank. And one of the shocking things about the Jimmy Savile affair is that hospitals failed to investigate claims against him because they were worried it would undermine fund-raising.

The way that financial interests distort our judgement has even penetrated the tax system. It is often noted that a small group of the very top earners pay a quarter of all income tax that is collected, and in fact this has increased under the present Government. But notice the misleading impression in this headline:

In fact, this relates to income tax alone, and not the ‘nation’s tax bill.’ Income tax only contributes about one third of all tax raised, and this headline leads people to believe, completely erroneously, that the tax system is helping to redistribute wealth. In fact, the poorest 10% of households pay eight percentage points more of their income in all taxes than the richest – 43% compared to 35%, according to a report from the Equality Trust. This arises from a historic shift from direct to indirect taxation—from raising tax through income to raising tax through expenditure. Since those who are less well off will always spend a higher proportion of their income on necessities, indirect taxation will always penalise them more. How is it possible to justify, in any context, the poorest paying a greater proportion of their income in tax than the richest? And yet no political party is proposing the basic rethink of the tax system that this figure requires.

The issue of MPs’ second jobs is just the tip of a problematic financial iceberg that most haven’t even spotted.

3 thoughts on “Should MPs have second jobs?”