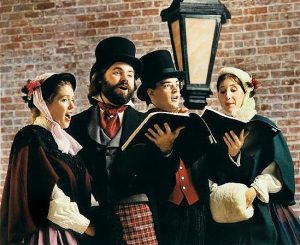 I am aware that all the readers of this blog are fastidious in their strict observance of liturgical seasons. So I am confident that, during this season of Advent, you will have only allowed yourself to sing Advent carols, and will not yet have either sung or planned to sing anything about Christmas until that season is upon us. It is, therefore, an appropriate time to reflect on the nature of carols and some of the things that they say.

Last week I posted a link to David Baker’s mildly provocative critique of some traditional carols:

What a load of nonsense is written in some Christmas carols. Of course, many are excellent. But along with the gold there is a lot of dross. Take the line in ‘Away in a manger’ which asserts boldly: ‘Little Lord Jesus, no crying he makes’. Really? On what basis is that stated? It’s certainly not in the Bible.

His short piece isn’t a comprehensive assessment of carols, but he clearly has his favourite targets.

But perhaps the most annoying carol of all is the well-known ‘We Three Kings’. This was written in 1857 by one Henry Hopkins Junior, who as Rector of Christ Episcopal Church in Williamsport, Pennsylvania, really should have known better. The problem is simply stated, and you know what it is: the Bible only states that the visitors from the east who came to visit Jesus were ‘magi’ – or wise men – rather than kings, and furthermore it doesn’t say how many there were.

In amongst the theological issues, David also asks questions about problems with the rhythm and rhyme, and offers a brief three-fold exposition of the kingship of Jesus. I felt David asked some interesting questions—but much more fascinating was some of the response I received on posting this. The most radical was from a friend on Twitter:

It’s a kind of bland puritanism which demands literal truism at this level. Next thing we’ll be arguing is that Noah’s ark is parked in Essex, The Good Samaritan was a real bloke called Eli from Shechem and the Johannine vine still grows in an Ephesian cave.

The most striking thing about this response is what it reveals about attachment to traditions. It sometimes seems as though it’s possible to question whether anything in the gospels actually happened (even whether Jesus existed!) or doubt some central theological convictions of the Christian faith, and you are asking responsible, searching questions that any modern person would ask. But question a cherished Christmas tradition—even one of recent invention—and all hell is let lose!

But two further assumptions here are worth further reflection. The first is that staying with what the text of the New Testament says should be interpreted as literalism, and the second is that such literalism involves stripping the text of its imaginative and poetic potential. The same point about ‘wooden literalism’ was made by Michael Sadgrove, former Dean of Durham Cathedral:

It comes down to *how* we engage in a deep reading of the text. Carols, hymns, poetry & art wean us off wooden literalism into an imaginative immersion into the tradition.

I confess that I find this contrast between the text and the imagination rather bizarre, not least because of the long-standing Anglican discipline of feeding our imagination with biblical metaphors, and shaping our thinking by them. Michael countered that ‘it’s precisely that imaginative engagement with the text that gives us permission to search for new symbols & metaphors, and indeed for new words too, as the creeds bear witness.’ But that was not, historically, the function of the creeds. They sought to draw boundaries around the undisciplined development of new ideas that moved away from the apostolic witness in the New Testament, and not set a trajectory of development for new ideas.

We do need imaginative engagement with the text, but (as Richard Bauckham argues) such imaginative reading also needs discipline—historical discipline which prevents us making the text mean what it could not have meant, and textual discipline, which takes the text seriously in its canonical context. Without that we miss the place of the magi within Matthew’s story that focuses on men and their power (in contrast with Luke’s focus on the women and their relationships). We miss the biblical allusions to the wider narrative of the Old Testament, and we miss the insertion at the beginning of Matthew’s gospel for ‘the lost sheep of the house of Israel’ (Matt 15.24) of a reference to ‘all nations’ to which we return (as an inclusio) at the end of the story (Matt 28.19). There is plenty of food for the imagination here! To suggest that we need to pull away from, detach, or add to the biblical text in order to give full flourish to our imagination assumes that the biblical writers themselves lack poetic imagination, or that their language was not in itself a rich source for reflection.

Michael offers two further defences of traditional hymns, regardless of whether they are true to the biblical story. The first is that there is much other poetry and art that similarly departs from the narrative; are we to dismiss this too? I think this is a slightly odd question. All art will have a mixed track record when it comes to illuminating biblical stories, and I am unclear as to why any art should be above question in this sense. Many love Rembrandt’s ‘The Return of the Prodigal’—but this is because it gives real insight into the human meaning of the parable Jesus told, not simply because it takes us into a new imaginative world. Michael’s other defence is the continuing pastoral value of traditional carols that people have grown up with.

If I am on my deathbed during Christmas, maybe barely conscious, nothing would comfort me more than to hear little children sing “Away in a manger”. “Be near me Lord Jesus…”, “And fit us for heaven to live with thee there”. And I’d hope not to have lost my God-given sense of enchantment in my last hours.

The issue for me not about loss of enchantment, but about being enchanted by the right things. I’d rather be enchanted by the transforming presence of Jesus by his Spirit, and sleeping in death awaiting resurrection to inhabit the New Jerusalem—a kaleidoscope of the imagination in itself. And when we challenge or continue these Christmas traditions, we are not only responding to traditions laid down in previous generations, we are also creating them for future generations. What kinds of enchantment would we like to instil in those who are at the start of their imaginative journey? For me, ‘away in a manger’ perpetuates the myth that Jesus’ birth happened away from the normal bustle of everyday life. Jesus’ ‘sweet head’ suggests that I should primarily be moved by sentimental admiration. ‘No crying he makes’ removes him from the realities of human life, something that Stephen Bullivant powerfully rebukes through the experience of his own child’s illness.

St Athanasius says somewhere – you’ll forgive me if I don’t have the full bibliographical details to hand – that Christ couldn’t ever have fallen ill. Frankly, I’m not remotely convinced. In fact, Chalcedon’s “like us in all things but sin” rather implies the opposite. After all, Isaiah 53 informs us, he has “borne our infirmities and carried our diseases”. The words of that great Easter hymn apply to Christmas too: “O who am I, that for my sake, my Lord should take frail flesh…”?

‘Look down from the sky’ seems to deny the presence of Jesus with us by his Spirit. And ‘take us to heaven‘ supposes an unbiblical eschatology which is about escape from the world rather than transformation of it. I think we can find a better enchantment.

Jeremy Begbie was asked whether we should continue to sing traditional carols—and he is hardly a wooden literalist!

Only with great care. For thousands, carols will be their only link with a church. At the same time, sentimentality is perhaps the single most dangerous feature of our Church and culture—and the sentimental air is never thicker than at Christmas. The Incarnation is messy, dirty, and resonates with the crucifixion. We need a new wave of carol writing that can gradually swill out the nonsense and catch the piercing, joy-through-pain refrains of the New Testament.

And some have risen to the challenge. Paul Bradbury, who is a pioneer minister in Poole, Dorset, has offered three updates of traditional carols. They might not be appropriate for your carol services this year, but they make the point about connecting with reality, and the real world of the nativity texts.

Away and in Danger

Away, amongst strangers, who gave them no bed
The new born Lord Jesus
Lay down his wet head
The stars in the night sky
Looked down in dismay
‘This was the Christ!? Asleep on some hay!?’

The cattle are lowing, this baby awakes
And just like a baby, a great din he does make.
‘I love you, Lord Jesus?
But please do not cry,
It makes you look human
Not aloof or on high.’

Be near me, Lord Jesus, get up from the hay
Grow into a man and be near me I pray
Bless all the children
In pain and despair
And don’t stop you’re crying
It shows that you care.

O little town of Bethlehem
In captivity you lie
Amidst your nervous, terror-ed sleep
The sentinels pass by.
In occupied streets shining
An endless burning light,
The hopes and fears of exiles’ tears
Are met in Him tonight.

How naturally, how painfully
the wondrous gift is given!
And God imparts to broken hearts
the promised reign of heaven;
Keen ears have heard his coming
But in this world of din
Where Roman soldier’s madness holds;
The liberator breaks in.

Sleepless night, horrible night
Baby cried, half the time
Round we walked this Mother and Child
Holy Infant not tender or mild
Sleep is desperately need-ed
Sleep is all that I need.

On a more practical note, Neil Bennetts and Rhiannon Davies have written additional words to the traditional ‘In the Bleak Midwinter’, and combine the traditional and a contemporary in a way that might be very effective in services where visitors are present—visitors who might know the tradition, but need it as a bridge into reality. Enjoy.

In the comments below, why not post your own reflections on your favourite carols, and why they communicate the Christmas story well, so that we can develop a resource for future years?

55 thoughts on “Should Christmas carols be biblical?”