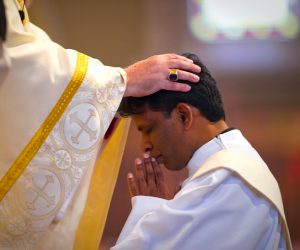 This is the time of year when ordinations happen, traditionally on the weekend nearest to the festival remembering Peter (‘Petertide’ which fell yesterday) which is either the last weekend of June or the first weekend of July. (It would be much better if this happened in September, but that is the subject for another post.)

As a result, there are social media posts aplenty in which people express their excitement, anxiety and anticipation at this great change in their lives and what it means. And there is no surprise that, for many, this is a moment of enormous significance and emotion. For many people getting ordained, they have gone through a process of great personal upheaval which has affected both themselves and their friends and family. They will often have given up a job they loved; they might have made financial sacrifices; they will have moved from a context in which they were confident, recognised and affirmed to involve themselves in a process where they felt seriously de-skilled. They have taken what might have felt to be a very risky step, since during the process of training they are in a kind of limbo; the recommendation they received, and on the basis of which they left employment and moved house, was not a recommendation to be ordained, but a recommendation to be trained, and there is always the possibility that ordination will not happen, or at least not immediately, and they are then caught between certainties. Ordination is therefore a moment of great relief that uncertainty has come to an end. And ordination marks authorisation and admission into an order of ministry which the Church does not easily grant and which is not easily relinquished.

So how do we express all the relief after all the anxiety? Very commonly, it is in the language of ‘being made a priest’ or ‘being priested.’ But this is not what the Church of England believes, at least not according to its liturgy. I have argued elsewhere that the C of E doesn’t ordain ‘priests’—at least, not in the sense that the Old Testament, Roman Catholics and most others religions use the word ‘priest’, since priests in these contexts usually have unique access to the divine which is not available to non-priests, and they offer sacrifices on behalf of others that ordinary people are not able to offer. The C of E believes neither of these things, and the ordination service itself says it is about ‘priests also called presbyters.’ The language within the service is not about ‘creating’ priests, but about calling and commissioning within the calling of the whole of God’s people.

God calls his people to follow Christ, and forms us into a royal priesthood, a holy nation, to declare the wonderful deeds of him who has called us out of darkness into his marvellous light.

The Church is the Body of Christ, the people of God and the dwelling-place of the Holy Spirit. In baptism the whole Church is summoned to witness to God’s love and to work for the coming of his kingdom.

To serve this royal priesthood, God has given particular ministries. Priests are ordained to lead God’s people in the offering of praise and the proclamation of the gospel. They share with the Bishop in the oversight of the Church, delighting in its beauty and rejoicing in its well-being. They are to set the example of the Good Shepherd always before them as the pattern of their calling. With the Bishop and their fellow presbyters, they are to sustain the community of the faithful by the ministry of word and sacrament, that we all may grow into the fullness of Christ and be a living sacrifice acceptable to God.

One of the most striking (and I think for outsiders most puzzling) moments of the service is the point of ordination itself, which is easy to miss, since there is no moment at which the bishop says ‘I ordain you’. This is sharp contrast to the sacrament of baptism, where the minister does say ‘I baptise you’, not least because ordination is not, for Anglicans, a sacrament. There is no inner and spiritual change for which the action is an outward and visible sign. Instead, the Spirit of God is invoked to equip this person for the ministry to which he or she is called.

Send down the Holy Spirit on your servant N
for the office and work of a priest in your Church.

(Even a brief comparison with the Roman Catholic rite shows how different the two rites are.)

So why do people ending up using language of ‘being made a priest’ and ‘priesting’ when this is some way from the language actually used in the Church? Why, year after year, did I observe people with an otherwise ‘low church’ view of ministry and ordination, get incredibly exciting about dressing up when the vestments companies visited college to measure them up for cassocks and clerical shirts?

A good part of the answer lies in the social and psychological significance of rites and rituals involved in the whole process. Even in our modern and postmodern culture, we dress up for special events (think high school prom, or weddings) and we dress up special people. When you wear a dog collar, you notice immediately how people treat you differently, whether you like it or not. But this is about social and personal psychology, not theology, and we need to recognise the difference, and not jump to theological conclusions about psychological phenomena.

And in this area (as in others) it is vital that we spot the difference. If the language of ‘being made a priest’ establishes the sense of fundamental difference between what I was and what I am now, what does that do to my previous experience as a lay person? And what does it then do to the status and significance of lay people who have not experienced this change? The language of ‘priesting’ buys into a sense of the stratification of humanity into different categories; it inhibits the ministry of lay people, it puts unreasonable pressures and expectations on clergy, and it is not biblical, not Anglican, and not helpful.

For those being ordained (last weekend or next) I pray for you and wish you every blessing. This is a hugely important moment for you, and it is significant for the church and other Christians, since we need good teachers and great leaders. But please don’t use the language of ‘priesting’ or ‘being made a priest’ to express the changes you are experiencing. You are not being made a priest at your ordination; as the ordination liturgy itself makes very clear, that already happened at your baptism.

16 thoughts on “Ordination does not make you a priest”