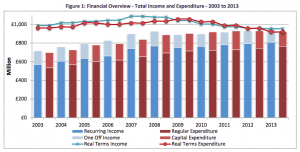 It is always interesting when there is a report on finance, just as when there is a report on numbers (e.g. on attendance). The reason for that is not because we should be obsessed with either numbers or money (though some people clearly are for all sorts of reasons). It is because these are two issues on which it is very hard for us to evade cold, hard reality. It has been said that you know that someone is truly converted when their wallet is converted. More widely, thinking about e.g. an annual report of accounts is an opportunity to make sure that everything is being handled well—that there is, for example, no-one embezzling the accounts—but even more importantly it raises questions of where the organisation is going, whether there is a plan, and what sort of vision is present.

The Church of England has just published its summary financial information for 2013, and although there is something of a lag, it makes interesting reading. John Preston, who is National Stewardship Officer, makes some positive comments:

The latest numbers are out and once again show that Church of England members have increased the level of their giving. The average weekly gift for all planned givers is now more than £10, and for those who give under Gift Aid, it’s now £11.60 per week (excluding the Gift Aid reclaimed on their giving)…

That seems to be to me very significant at a number of levels—not least in offering a social apologetic for Christian faith and for the Church as a contributor to society. Faith makes a tangible difference in the lives of Christians. (I am not sure whether there is comparable data available for other faith traditions. I am not suggesting that this should be employed in a tit-for-tat debate, but it offers credibility to the claim that Jesus makes a difference.)

But, as John goes on to say, it is not quite good enough good news, at several levels. First, General Synod encourages church members to give 10%, half to the C of E, and half to other charitable causes. (Did you know the Church of England believes in tithing? Did you know that it had a definition of membership?!). Even though there is an increase this year, giving to the Church through parish giving is still at only 3.3% of income. (I am assuming that this must be estimated in some intelligent way.)

Secondly, increases in giving have not kept up with the (very low) level of inflation in recent years—see the chart at the top. Against this would need to be factored in the overall decline in attendance, as well as the impact of the recession.

But, thirdly, all these aggregate figures disguise some important disparities. In my experience, at a local, deanery and diocesan level (I am part of our Deanery Finance Group), there is a very wide variation in giving from parish to parish. I don’t have any figures or research to hand to suggest that these differences correlate with theological tradition, but I would be very surprised if they didn’t. As a Deanery, we have been thinking about the theological principles behind giving (which you can read here). Several of these relate to the fact that giving is largely shaped by theological understanding and vision—but it also clear that giving beyond local churches depends on mutual trust and understanding—a shared sense of common purpose.

Two weeks ago, the Church Times reported on an initiative by some evangelical churches to set up trust funds in order to support other ‘like-minded’ congregations rather than see their money disappearing to a central system which they no longer trust.

THE answer to questions such as “Why should I give up my skiing holiday to fund heresy?” can be found in “financial twinning”, a priest in the diocese of Southwark has suggested. The Vicar of St Luke’s, Wimbledon Park, the Revd James Paice, is a member of the Southwark Good Stewards Trust, which he describes as a means to protect poorer churches with an “orthodox Anglican ministry” from the threat of cuts to clergy.

In an article for the magazine of the Church Society, Crossway, he explains how knowledge of the existence of such trusts “puts a brake on the revisionist mentality that is threatening to destroy our Church from within”. The article, published in March, describes “intra-church trusts” as an “alternative to the diocesan quota system”. After paying the “total clergy cost” to the diocese, a church puts extra monies into a trust, from which they can then be given to a church “whose minister subscribes to an orthodox statement of faith, and which would like cross-subsidy”.

The predictable reaction of some will be that this is just wealthy evangelicals using their financial power to bully others into orthodoxy. But I am not sure that that accusation will stick.

The Bishop of Willesden, the Rt Revd Pete Broadbent, defended the scheme. “Dioceses have historically made Common Fund or Parish Share a tax on church growth, to which larger parishes responded by quota capping,” he said last week. “This is a better approach all round. Parishes pay their costs, and give money over and above to poorer parishes.

“It’s a win-win — the Common Fund gets paid; poor parishes get supported; the diocese doesn’t lose out; and good prayerful and missional partnerships grow between the rich and the poor. It’s only divisive if the diocese wants to control everything. Common Fund is voluntary — not a centralised command economy taxation system.”

In fact, you only have to see the relationship between trust or shared vision and giving by considering the opposite—that congregations give to central budgets without any sense of consultation or agreement. The suggestion is ludicrous.

In the end, such financial arrangements could be very helpful—in clarifying exactly where different churches and traditions really stand on key issues. If this becomes widespread, one thing will be certain: financial reporting for the C of E will never look quite the same.

17 thoughts on “Money, faith and the Church of England”