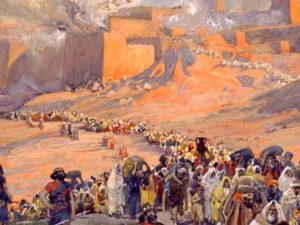 Mark Ireland writes: Last night in my role as archdeacon I inducted a new Vicar to his new Lancashire parishes behind closed doors. Instead of a packed church of congregation, community and friends from previous parishes, there were just three churchwardens, the priest’s spouse, the patron and the bishop – all sitting spaced as far apart as possible in a cavernous space filled with empty pews. In this setting the traditional place in the service where the priest rings the bell to tell the parish they have a new priest took on extra significance. In fact the priest rang the bell so vigorously that he broke the bell-rope!

We are living in disorienting days. As churches we have always worked hard to overcome social isolation, to overcome loneliness, to bring communities together. Now we must encourage people to keep apart, and not to come to worship except in the smallest of groups.

There is a profound sense of exile in all this, and so it is that we can turn to the Scriptures for strength, as the Israelites, with their profound sense of place and of the centrality of the Temple, had to work out how to worship when the temple had been destroyed and they were distanced and isolated from all that was familiar. ‘How could we sing the Lord’s song in a strange land?’ asks the Psalmist (137.4).

Daniel, as an exile living in Babylon, gives us an interesting glimpse of how the home became the place of prayer and worship for those who could no longer go to the temple. In Daniel 6.10 we read how Daniel ‘continued to go to his house, which had windows in its upper room open towards Jerusalem, and to get down on his knees three times a day to pray to his God and praise him, just as he had done previously.’ We have much we can learn from our Jewish friends today, for whom the home and the family meal table is as much a place of worship and prayer as the synagogue.

One encouraging thing we know about the exile in the Old Testament is that it was a time of profound spiritual renewal. It was the time when God’s people went back to their founding stories, it was the time when much of the OT as we currently have it took final shape. When eventually they returned to the Promised Land they lived differently. They left behind the worship of idols and returned single-heartedly to worship God, but in a different way.

My prayer for each local church is that we may use this time of exile to rethink how we are church for a new generation. The world is changing faster than we ever knew. Naturalists tell us that the survival of any species depends on its ability to adapt and change more quickly than the environment around it. The same is true of that living organism which is the Church of God. If we simply focus our hopes for after corona on restarting everything the way it was before, the painful experience of exile will have been wasted.

In that strange induction service last night I decided to record parts of the service on my phone to share for those who couldn’t be there. Having posted last night the recording of the bishop’s sermon and the institution itself on the diocesan FB page, I was surprised to discover this morning that the video had already been viewed 450 times – by more people than would otherwise have been in church. I am already pondering what we can learn from this for the future after the virus.

So in these disorienting times let us ask God to give us grace to live hopefully in this time of exile, to listen for his voice, that we might in due time return from exile a changed people, ready to do church differently, that we might reach a changed community with the unchanging Gospel of Christ.

And as we listen for the voice of God, what might he have to say to us about the world as well as about the church? In particular about our care for creation?

The grounding of flights, slow-down in the economy and the closing of factories is, strangely, giving a profound rest to the earth. After decades in which we have over-produced, over-consumed, over exploited the earth, and failed to agree any effective means to reduce our carbon output, suddenly change is being forced upon us. Rest for the earth is a constant refrain in the Old Testament, as the nation is commanded to give the land rest every seventh year and every jubilee. This current crisis is an opportunity for us to hear the cry of the earth, and with it God’s call to live gently upon the earth, and to reduce our consumption, so that the earth might flourish for future generations until the Lord returns.

How will we use the time that we suddenly have? It will be easy to fill it with fret and worry, and to give in to loneliness and fear. Instead, as Christians how can we ‘make every effort to enter into God’s rest’, to make these new spaces a sabbath in the biblical sense – a time for rest, a time for relationship, a time for God? We need time and stillness to hear God more than ever when everything around us is so uncertain.

We hear much at present about being guided by the science. Science has many answers but it does not provide us with a moral code. As government goes into survival-mode we need to affirm loudly that the test of how Christian a society is how do we care for the most vulnerable, not how do we protect the most productive. Jesus’ whole ministry shows his care for the poor the marginalised and those whom society did not value.

One small example is the local foodbank. The ministry of foodbanks will be more and more important in the days ahead, and yet there have been signs of donations dropping as people hold onto things for their own needs. One of the heartening things I am hearing from local clergy though is the creativity of many churches that are beginning to plan for how to feed hungry children when school is cancelled next week, and how to establish contact with vulnerable elderly who must self-isolate for their own safety.

19 thoughts on “Ministry in this strange new land”