Peter Ould writes: Harry Farley at Christian Today has reported the response to the reading of the Qu’ran at a Communion service (Eucharist) in St Mary’s Cathedral, Glasgow on the 6th of January. You can watch the reading yourself here:

The passage being recited is from Surah 19, ‘Mary’ and includes some apocryphal material about Jesus speaking as a baby from the cradle. This is pretty docetic stuff and a little infant speaking adult words is a kind of ‘superhuman’ Jesus that is miles away from the Biblical view. The source of this material is from the Syriac Infancy Gospel, an apocryphal document from the fifth or sixth century. Needless to say, it’s not even vaguely ‘Scripture’ and Michael Nazir-Ali is right to condemn the use of it in a church service by Kelvin Holdsworth, the Provost of Glasgow.

There is, however, another dimension to this service that hasn’t yet been picked up in commentary, which should disturb Anglicans everywhere far more than simply telling fairy tales about Jesus in a church. The liturgy for the service includes an English language copy of what is being recited in Arabic. Here it is. 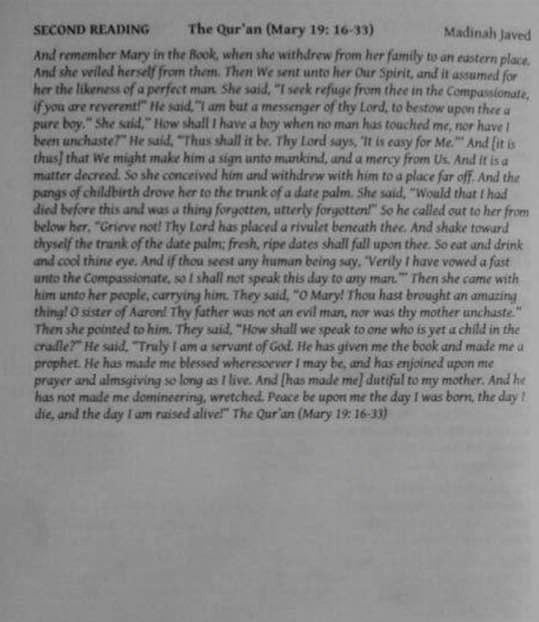 The text in the service sheet stops at Ayah 33 (the equivalent of a Bible verse) but this is not where Miss Javed stops. She continues to recite from the Qu’ran and includes the following verses that follow straight after the text above.

34 That is Jesus, the son of Mary – the word of truth about which they are in dispute.
35 It is not [befitting] for Allah to take a son; exalted is He! When He decrees an affair, He only says to it, “Be,” and it is.
36 [Jesus said], “And indeed, Allah is my Lord and your Lord, so worship Him. That is a straight path.”

The recitation finishes with the words, ‘Allah, the Almighty, has spoken the truth’. This a standard liturgical suffix to a reading, the equivalent of saying, ‘This is the Word of the Lord’. The reading is being offered as a proclamation of God’s word, his truth.

These extra Ayah teach two clear things. First, Jesus is not the son of God and is not divine. Second, Jesus should not be worshipped. These are the two doctrines that were proclaimed from the pulpit in Glasgow Cathedral on the Feast of the Epiphany, the celebration of Jesus being revealed to the nations. What kind of revelation is that?

There are a few options as to what is going on here. The first is that Kelvin Holdsworth is very naive and didn’t realise the context of Surah 19 when he invited Miss Javed to speak. Do we really expect that kind of ignorance from a Cathedral Provost? What a mistake to make. The second option is that the Provost did know the context of Surah 19, was aware of what Ayah 34 to 36 taught but didn’t bother to highlight to Miss Javed the problems that might be caused by including those verses in her recitation. That seems to me to be incredibly negligent, allowing a potentially blasphemous reading to be used on a major Christian festival.

Of course, there is a third option that is even more disturbing and that is that the Provost of Glasgow Cathedral knows what the issues are around the use of these three verses but simply doesn’t care. He’s not in the slightest bit bothered if a denial of the deity of Christ and all that follows from that (his worship for example) is made in the house of the seat of the Bishop of Glasgow and Galloway. He might even revel in the controversy it causes. Perhaps he is a syncretist and believes that Muslims will be saved by the amount of good works they perform, a denial of the need for grace and faith in Christ.

Whatever the explanation is, this is an issue that goes way beyond inter-faith hospitality, respect or education. It’s one thing to share examples of Muslim scriptures in a non divine service context, it’s another to specifically incorporate them into Anglican liturgy. What we pray is what we believe after all. Giles Goddard, the vicar of St John’s Waterloo, got a firm slap over his hands for allowing Islamic Friday Prayers to happen in his church, especially with the covering up of Christian icons. Southwark Diocese is notoriously liberal yet even this was a step too far for Bishop Christopher Chessun. 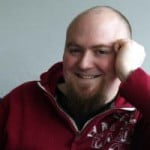 As a contrast, despite being asked for comment 48 hours ago, neither the Provost or the Bishop of Glasgow have made any public comment despite requests by journalists like Farley for one. When—if—they eventually do comment, the key will be to see if they obfuscate around claims of ‘inter-faith friendship’ or whether they actually engage with the key theological issues themselves of what doctrines shouldn’t be expressed in an Anglican liturgy and what the response is if a liturgy, whether accidentally or purposefully, expresses a heresy.

We await with anticipation the response from north of the border.

56 thoughts on “Is Jesus begotten of the Father?”