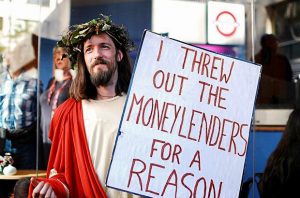 The annual meeting of the World Economic Forum is starting today in Davos, Switzerland, attended by the leaders of the the wealthiest economies and the biggest corporations. And, in what has become something of an annual ritual, Oxfam has expressed its objection to the gross inequalities between rich and poor in the world.

Eight billionaires have riches equivalent to the same wealth as half the world, campaigners have warned world leaders gathering for talks in Switzerland…

Mark Goldring, Oxfam GB chief executive, said: “This year’s snapshot of inequality is clearer, more accurate and more shocking than ever before. “It is beyond grotesque that a group of men who could easily fit in a single golf buggy own more than the poorest half of humanity. While one in nine people on the planet will go to bed hungry tonight a small handful of billionaires have so much wealth they would need several lifetimes to spend it. The fact that a super-rich elite are able to prosper at the expense of the rest of us at home and overseas shows how warped our economy has become.”

Goldring is here articulating the obvious and instinctive response that most of us feel in hearing these alarming statistics. But the response to the data has another interpretation, and whilst Oxfam’s statement appeals to the emotions, those on the other side seek to appeal to statistical reason.

The Adam Smith Institute free market think tank accused Oxfam of putting out misleading information. Head of research Ben Southwood said the welfare of world’s poor was improving with the proportion of the global population surviving on less than 2 dollars-a-day – falling from 69% in 1981 to 43% in 2008.

“Each year we are misled by Oxfam’s wealth statistics. The data is fine – it comes from Credit Suisse – but the interpretation is not. It is not the wealth of the world’s rich that matters, but the welfare of the world’s poor – and this is improving every year. The consumption of the world’s poor continues to rise, as does their education, healthcare, and height.”

That last observation (about height) might strike you as odd, but adult height is a measure of infant and childhood nutrition, and so indicative of a whole range of other important factors.

This contrast between the emotional and rational offers a challenge to Christian thinking about wealth, poverty and global development. Whilst many (though not all) of us feel instinctively uncomfortable at such vast wealth being accumulated by so few, it is an awkward reality that, despite all the other efforts at relieving poverty, it is the international trade that has been ushered in by the acceptance of globalisation that has done more, and more quickly, to alleviate global poverty than any other single initiative.

There are two major theological themes which offer a framework for reflecting on issues of economics, and the broad debate between capitalism and socialism. The first is the principle of God’s sovereignty and ownership of all things.

This is a restatement of the creation principle of the sovereignty of God; the whole created order has its origins in him, and he is lord over all. This works itself out in the life of Israel in seeing them not as owners of the land, but as tenants in it, with God as their landlord. It underlies the Jubilee principle, set out in Leviticus 25, that there are limits to the exploitation of the land, which should enjoy ‘rest’ just as the people do, and that the apportioned land should be returned to its original designates, no matter how those apportionments have been amended in the intervening years. Here is a radically ‘socialist’ agenda of fundamental rights of access to assets, and an undercutting of the idea that ‘capital’ actually ‘belongs’ to anyone in any final sense. And it is one which is rediscovered by the people of God when directed by the Spirit of God in Acts 2.44 ‘The believers held all things in common…’

But this principle of the sovereignty of God over creation cuts in another direction too. There is little sense in scripture of people having an inalienable right to land; occupation comes with responsibility, and God’s command is to be ‘fruitful.’ We are stewards who are accountable to God with what he has given us, and in our contemporary context that means putting our capital assets to good use. Jesus’ economic parables about the kingdom (including the parable of the unjust steward in Luke 16.1–13 and the parable of the ‘talents’ or treasures in Matt 25 and Luke 19) don’t in fact teach us much about economics, since they are parables about the kingdom, but they do draw on an assumption that we are to be productive and accountable in that productivity.

Together, these principles mean that it is difficult for Christians to have a fundamental objection to all forms of capitalism, since that neglects the command to responsibility and productivity, expressed most sharply in Paul’s practical injunction in 2 Thess 3.10 (‘Ya don’t work—ya don’t eat’ in one colloquial version). But it also means it is hard not to have a fundamental objection to such vast inequality, which must depend on a ‘hard’ understanding of ownership that biblical theology cannot accept.

Challenging the power of The Eight, or slightly more broadly of the 1% who own as much as the other 99% does face some challenges—not least that many people reading this are in fact in that 1%. As the BBC reports, ‘It takes cash and assets worth $71,600 [£59,041] to get into the top 10%, and $744,396 [£613,985] to be in the top 1%,’ which means that homeowners in many parts of the south of England are in that 1%. We, who object to the wealth of the wealthy are wealthy ourselves. This might seem odd; why should simply owning a house put me in the 1% in the UK, when if I was in a similar situation in another part of Europe, where house prices were not so elevated, I would not be? This points to the interrelationship between wealth and access; house price inflation in the UK has created a division between the ‘haves’ and the ‘have nots’, and as result home ownership is plummeting amongst the young.

And if that is the case with home ownership, it is even more so with the super-rich, who form a self-perpetuating club of oligarchs. This summer, former Chancellor George Osborne went on a speaking tour in America and earned £340,000 in speaking fees. Objecting to this is not simply about a politics of envy; it is to question the lack of connection between earnings and merit, the disconnect between monetary value and actual value. Wage packets of FTSE 350 chief executives have risen 82% in 13 years, while return on money invested has been 1%, and earnings for most of the population have remained flat or decreased in real terms. There is a fundamental question of justice here, and this is the reason why most people agree with Jeremy Corbyn’s call for a cap on earnings, even if they find his overall approach lacks credibility.

But there is also the question of power: is it right that, since money equates to power, so much power should be concentrated in so few hands? In politics, we would find this unacceptable, yet we appear to find it much harder to object to concentration of financial power. Of course, this power can be used for good; Mark Zuckerberg and Priscilla Chan have pledged to give away 99% of their $45b fortune (though why they need to hold on to the remaining $500 million I am not sure), but this is not the universal practice.

The reality, of course, is that the aspects of capitalism which have led to the alleviation of global poverty are not the same as the aspects of capitalism which have led to the accumulations of the mega-rich. When it is argued that ‘these are two results of the same system,’ there is the underlying assumption that there is one system called ‘capitalism’, and you either take all of it or leave all of it. A brief tour around Europe (whilst that is still possible) puts the lie to this. In other countries, workers sit on company boards, pay differentials are markedly less, there is greater strategic investment, and there is the absence of the post-Thatcher antagonism that marks so much of UK industrial relations. Six years ago, Jon Kuhrt hosted on his blog a proposal for five reforms of capitalism as it is currently practiced in the UK, including the ‘Tobin tax’ on financial transactions, cutting income inequality, committing to Fairtrade, considering factors other than financial value in the Stock Market, and closing down offshore havens. This is not about abolishing capitalism, but about reforming it.

So as the Davos meeting commences, it is worth asking some questions. Is it a sin to be rich? No—but it might be a sin to be this rich, in this way, whilst resisting calls for serious reform of the system.