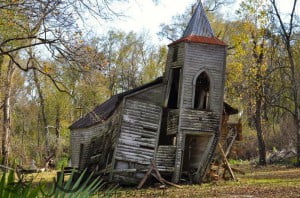 Last week Mark Woods posted an intriguing article asking whether evangelicals are to blame for the decline in people claiming to be ‘religious’. He is responding to a new survey conducted on behalf of Linda Woodhead which shows that, for those under 40, ‘no religion’ is the new religion. In a strange way, this might be a reflection of just what evangelicals have claimed for some time.

During the last few years evangelicalism has become the dominant force in UK Christianity. One of its key distinctives is the need for the individual to choose to become a disciple of Jesus. For evangelicals, no one is born a Christian. It is a personal decision, to be marked in the lively and flourishing charismatic-type churches by baptism, the rite of initiation into the Church. Churches might have a “fringe” of people who attend parents and toddler groups and other social-type meetings – and they might even turn up to services occasionally – but they aren’t part of the “real” church unless they’re committed believers.

On this understanding, the reluctance of people to say that they are Christians is an inevitable part of the evangelical narrative: “We know we aren’t Christians, because you tell us we aren’t.”

Woods here brings to the rather two-dimensional sociological analysis the third dimension of theology. The hidden question underlying the Church of England’s ‘Reform and Renewal‘ programme is exactly this question: what is the church, and what does it mean to be a leader of this church? At a conference last week on ‘The Church in Crisis: panic or denial?’ Richard Bauckham addressed just this question. What are we here for as a church?

For the Church of England, as the established church, there has been the accretion of all sorts of things which are not essential to its identity as a church—including, we might suggest, a contribution to the definition of national identity as ‘English’. These things might be useful in certain contexts, but they are not what the church essentially is. Rather than being an innocuous purveyor of pomp and circumstance, theologically speaking the church is defined by its relationship with God. This might seems obvious but it is not always the case in practice in many of its discussions, including the discussions by Linda Woodhead and Andrew Brown. So Bauckham four key understandings from the New Testament of what the church is.

This is the idea behind the New Testament language of ekklesia. This is a continuation of the language of the Greek Old Testament (the Septuagint, LXX) used regarding Israel. The church is the renewed Israel in these end times. This term also has a background in Greek understandings of the democratic government of the city (polis), referring to the citizens’ assembly. In the New Testament it is the assembly—but of God’s people. It is the ekklesia of God. Most often it refers to the people who gather together in a particular place, even when they are not actually doing it. Implicit in this perspective is the reality that the church would not exist if God had not created it; 1 Peter 2.10 expresses this most clearly, where Peter notes (citing the OT) that those he writes to ‘once you were not a people’ until God formed them as a people by means of Jesus’ act of redemption.

2. The Temple of God

This kind of language is also found in 1 Peter 2.5, where Peter’s addressees are ‘living stones, a temple built by God’ but the language is also used explicitly in Paul, both in relation to believers corporately (1 Cor 3.16) and individually (1 Cor 6.19). But, springing from Jesus’ own claim to be the true temple (John 1.14, 2.21) and Paul’s theology of church as body of Christ, it underlies many other aspects of Paul’s thinking. The temple is the place where God promises that his presence will dwell; it is the place where you worship; where God is to be found.

There is a key challenge here: can we think of this idea of church as temple without thinking about church buildings? In the NT, it is an image of the people, not the buildings—and in fact, it is about people in contradistinction to buildings, and one building in particular. God is present wherever this people gather. God makes himself accessible more fully than he could possibly have done in the Jerusalem temple.

3. The Body of Christ

This is an idea that we do not find in the OT nor anywhere outside the Pauline letters. (I am convinced that is springs from Paul’s encounter on the Damascus Road in Acts 9, and Jesus’ revelation that whatever is done to his followers is done to him. This notion is found, in other terms, in the gospels, particularly in Matthew 25 and in Johannine ideas of the disciples being ‘one’ with Jesus and being incorporated into him, e.g. in the image of the vine in John 15.) In the Corinthian correspondence, this idea is more about relationships with one another; in Eph 4.15–16 (and its rather startling metaphor of the body ‘growing up into’ the head, whatever we make of that) it is about our relationship with God. It is not concerned with the ‘divinisation’ of the church, but emphasising that this is where the risen and ascended Christ makes himself visible in the world.

As I have explored previously, this language is only used in gospels and Acts. It is an interesting puzzle to see this in only one part of the NT—but it is a pretty significant part, and so hard to ignore. Luke’s use of the term in Acts emphasises continuity between pre and post-Easter faith; much has changed, but not everything. If in the gospels, disciples are people who have spent time with Jesus himself, in Acts disciples are being who have spent time with disciples of Jesus, and then themselves become disciple-making disciples. This is, in effect, Luke’s way of expounding Matthew’s unique term matheteuo in Matt 28.19.

The language of ‘disciple(ship)’ (though the NT never uses the abstract noun) highlights personal commitment to a way of living. The church is a community of people who intentionally fashion their life after the example of Jesus. It is about living the whole of one’s life in the way that Jesus taught and exemplified.

Having outlined these four aspects, Bauckham then added a note of caution. The recurrent impulse in the Protestant tradition that we ought to be going back to NT in how we do everything. This is trying to have too much of a good thing. There are things about the church in NT which are historical and contextual. Some things took time; some things are unclear. They are instructive but they are not instructions. Nevertheless, these four things give us some important markers in our thinking about church and religion in England and the UK. They mean that some ways of thinking about numerical decline are alien to the NT—in particular, worry that it signals a reduction in the power of the institution, or concern about keeping show on the road. We should be concerned about numbers, but these four ideas clarify why: because we want people to come to faith in Jesus Christ.

This takes us back to the opening question: what are we to make of both the decline of ‘religion’ in the nation, and the parallel decline in church attendance? A friend of a friend posted last week on Facebook some sobering statistics:

By way of comparison, the English Football Premier League has an Average Weekly Attendance throughout the year of 264,300. The combined membership of all political parties in the UK is around 850,000 (which includes 180,000 who have joined Labour as part of the Corbyn surge), a figure which includes many who just pay a membership fee but don’t turn up to anything. While the direction of C of E church attendance is an issue to be concerned about, C of E weekly attendance is still something that dwarfs many other apparently thriving institutions.

In other words, we now live in a society that simple doesn’t opt in. Social media (amongst other things) has made us all into trenchant individualists.

The analysis of Woodhead and Brown doesn’t appear to pay any attention to this—and it collapses any theological perspective under the weight of (naive) sociological concern. Thus Brown can conclude:

But at the same time as people have been growing less religious, the Church of England has been growing more religious: more exclusive, more of a club for self-conscious believers, prouder of being out of step with the people it once served…Under those circumstances, it’s not really surprising that no religion has become the new religion, while “religion” has become something that other people do. The interesting question is whether Christianity in this country can ever recover, or whether some kind of organised humanism could actually replace it.

In this approach, Christianity is simply an aggregate expression of whatever the nation happens to believe—a hard definition to justify on any set of assumptions.

Even Mark Woods analysis is in danger of collapsing three distinct but related issues:

The sociological approach answers these questions ‘No, yes, yes.’ Some conservative churches answer ‘Yes, no, no’—they are clear about the gospel, clear about the need for commitment, and have often seen social involvement as an unwanted distraction from ‘proclaiming the gospel.’ Many of the new churches have changed this to ‘Yes, yes, maybe’, as they have added social action to an otherwise ‘conservative’ theological outlook—but still emphasise the importance of commitment and discipleship. Historically, the Church of England has often answered ‘Maybe, maybe, no’—they have been reluctant to spell out core beliefs, often not very intentional about active social engagement, but very relaxed about who turns up and why. As an evangelical Anglican, my answer is ‘Yes, yes, yes’—historically, the Church has at times been very clear about what it believes; there is a compelling argument for expressing the gospel in action as well as words; and people need time and space to explore faith if the church is to grow or be effective.

But without answering ‘yes’ to the first question, and answering it along the lines that Richard Bauckham suggests, it is difficult to see in what way we are talking about ‘church’ at all.

51 thoughts on “Is Church decline the fault of evangelicals?”