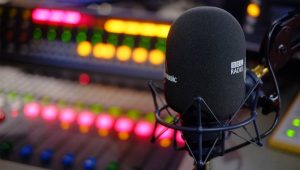 I last wrote about speaking on the radio (and television) four years ago, so thought it worth revisiting the subject. This arose in part as a reflection on contributing to a piece about Justin Welby’s comments on higher tax rates on Radio 4’s Sunday, in which I debated with Andy Walton whether Christian leaders should advocate particular (party) political position.

In our digital age, it is fascinating to note the continuing appeal of radio. Our BBC local radio station reaches 131,000 people, which is 16% of the population, and Radio 4’s Sunday programme is listened to by millions. And radio is a very easy medium to work with, in comparison with the complexities of visual media. So working with your local radio station is something that every Christian leader should think about as part of engaging in the wider population of your area. I began my training and experience with radio during my theological study and ordination training.

There is nothing quite like actually doing it for yourself—but it can feel strange and intimidating when you start off. So here are my revised Ten Commandments of working with radio.

It sounds rather basic, but it is important to be there and be unhurried when you get to the studio. If you have not been to this location previously, give yourself enough time to find it and be settled. Live radio is a busy occupation, and they will be thinking about the previous item before you are on, and the next item when you leave, so don’t expect to be waited on hand and foot!

And make sure you take a paper and pencil with you…

There is a serious temptation to think that being effective in broadcasting is all about technique. But the same rule applies to broadcast communication as applies to preaching: good technique can prevent things going wrong; but it is good content that is essential to help things go right. So the first question to ask is: do you have something interesting, insightful or original to say on the issue being discussed? Why have you been asked? What experience and insight do you bring? Don’t underestimate the value of actually thinking an issue through—and use social media beforehand to explore the issues. Asking others what they think will give you fresh perspectives.

Preparation needs to start with understanding your brief. Who has invited you, to do what, and debate with whom? I had originally been invited to debate with Gile Fraser, so my research would have been to read the articles he had published and the statements he had made, possibly printing them out, annotating them and bringing them with me, and being able to quote specific phrases that I would then respond to.

For this programme, I had read a number of articles online, and read both what Justin Welby had said as well as some of the responses to it (which I then included in my blog write-up). In the discussion another article was quoted which had only come out that morning (before 7 am!) which was frustrating—but you cannot cover everything. This does mean that you might need to give an hour or two thinking about the issues—all for a one third contribution to a six-minute piece! But if you are communicating with several million people, that is not much time of preparation per person. Compare that with the preparation per person listening that you do for your Sunday sermon!

One of the shocks of working on radio is realising how little you are going to be able to say. Last Sunday’s item lasted about six minutes (and I had been told that beforehand). Two of us were debating, and the interviewer was also making comments. That meant that I would have a maximum of 2.5 minutes to say anything, and at normal speaking speed that means a maximum of 250 words! In normal conversation, that works out at about eight sentences.

To be effective you therefore have to be very deliberate in what you say. Formulate some pithy summary sayings that will have a bit of punch. Two of mine were ‘Jesus wasn’t a member of the Labour Party’ and ‘We are not in the business of preaching salvation by economic policy’. It’s worth noting that summarising teaching in these pithy apothegms is something we find modelling in Jesus’ teaching in the gospels, and is also really good practice in preaching, so nothing is wasted.

But, unlike in other contexts, you need to say your most important things first. If you wait for your second or third sentence to make your point, it might never come. You need to present your conclusion, and then back it up with evidence and argument, rather than use the more common communication strategy of marshalling evidence before coming to a conclusion.

Since you don’t have much time, you will need to have your key ideas already formulated. But it is also important to eliminate any distracting habits, especially getting rid of any ‘ers’ and ‘ums’. Listen back to yourself, note any unhelpful habits, and practice speaking without them. Again, this is good training for preaching and other kinds of communication. 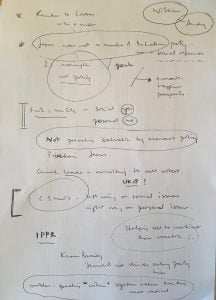 In a live interview, you do not have complete control of where the conversation will go or exactly how much you can say, so you will have to adapt your material and improvise a little as you go along. This means that your pre-formulated summaries and your ideas from research are not so much a ‘to-do’ list for the item so much as a hard of cards from which you select what you want to play.

It also means that you should have your paper and pencil out as you are on air. Listen to what the other person is saying, or the introductory comments from the presenter, and note down things that you want to respond to. You can see on the right my page of notes for Sunday. I have noted the names of the other people at the top right so I can refer to them. I have listed the range of ideas that I want to draw on, and highlighted what I think are the most important comments to make.

Being flexible also means not feeling obliged to answer exactly the question you have been asked. Politicians have the annoying habit of completely ignoring the question and making the statement they want to, which highlights their issues but undermines their credibility. So it is worth acknowledging the question, whilst reframing and addressing the issues that you think are the important ones.

Radio works best when the presenters are smiling! That might sound odd, but in fact your disposition communicates itself through your tone of voice and your register of speech. You might be in a little box room with nothing more than a microphone and a box with lights on, but those listening don’t know that. You need to imagine yourself sitting round a table with the other people on the item, having a friendly though slightly formal discussion about the issue at hand.

And don’t even think about the millions who are listening. Radio can be quite an intimate medium, and each listener thinks you are speaking to them alone. So treat it like that kind of personal conversation.

Broadcasters general think they will get the most interesting programme when there is the greatest level of conflict. So they will not usually invite the centrist voices of reason, but on any issue will seek out spokespeople with the widest divergence of views that they can find. This is particularly unhelpful on questions of Christian faith and ethics—but it is the way the system works.

When the producer phoned me to ask if I would contribute, he probed to see how extreme my views were, and whether I would disagree strongly enough with Giles Fraser. My comment ‘Oh, I am always happy to tell Giles that he is speaking a load of rubbish!’ probably sealed the deal! But Andy Walton (who ended up on the programme) and I actually mostly agree, so I had to find ways to bring another angle. Without being conflictual, it was important to be colourful—that is, to have a range of views and perspectives which provided contrast. No producer will thank you for agreeing with everything your discussion partner says—and, in any case, life is not really like that.

If the invites comes, accept it, even if it means rearranging other things around it. In my experience, even national broadcasters are not that organised, and they are usually working at the last minute to address issues that have just come up in the news. You might sometimes wonder, when watching or listening, ‘Why on earth did they invite that person?’ and the answer will most likely be ‘Because they were the first to say yes’.

If you want to engage with the wider population and communicate something positive, you will need to make yourself available, probably at short notice.

If you are on the radio as a Christian minister or a Christian layperson with a particular perspective, then make the most of it. Although 67% of the population of the UK know a Christian, the vast majority have no real understanding of Christian faith or the teaching of Jesus. Radio broadcast is not a lectern to preach from, but it is a platform from which to communication something, perhaps just one thing, about what Christian faith means. So mention Jesus and his teaching, and try each time to say one thing that Christians believe, in a clear and winsome way.

So get involved, learn from experience, don’t be discouraged when it doesn’t go well, and enjoy the experience. You will find it benefits all your other experiences of communication.

8 thoughts on “How to speak well on radio”