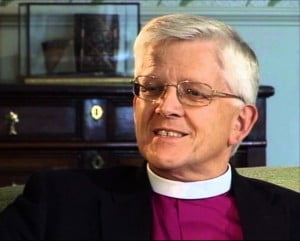 Julian Henderson, Bishop of Blackburn, one year in post and after having got to know the lie of the land, has warned that unless the Church reinvents itself in his own diocese, it would disappear like the region’s textile industry.

I am convinced that we need to embark on radical change. We need to reinvent ourselves for the 21st century. Anything less will leave us to wither away rather like the once mighty Lancashire cotton industry. A few tweaks and adjustments will not suffice.

His concern is certainly no empty rhetoric; other denominations appear to be rapidly disappearing from the area.

Next month St Mark’s Church in Higher Witton Road, Blackburn, is set to close after 175 years, while earlier this month the 200-year-old United Reformed Church in Haslingden closed its doors for the last time after its congregation fell away.

And the Anglican diocese has seen the kind of decline reflected elsewhere in the country.

The number of people attending services on a Sunday has halved to about 800,000 since the late 1960s, according to the latest national statistics published by the Church of England. But equally concerning is that the average age of churchgoers is 62, with churches struggling to attract young people. The latest figures for the Blackburn diocese showed the average weekly attendances declined from 31,100 in 2008, to 26,600 in 2012.

In response, Henderson proposes a 12-year plan with some very specific goals:

Bishop Henderson has summarised his initial vision in a document titled ‘Where are we heading?’, which calls for heavy investment in youth groups, flexible patterns of worship and plans to grow new congregations. It also suggests the diocese should ‘unashamedly seek to bring others to faith in Christ’ and foster closer integration between different churches.

Henderson’s appointment to the diocese was unusual, since he is a conservative evangelical, and the diocese is largely ‘catholic’ (sacramental) in its spirituality and church tradition. His plan has clear marks of his own spirituality, so it will be interesting to see how it is received in the diocese as a whole.

But one thing which is not mentioned in the press reports is the question of clergy and the numbers in stipendiary ministry. As I have argued elsewhere, I am not sure there are many examples in history where churches sustain growth without stipendiary ministry. This is not because I believe in clericalism, but simply because setting people aside for ministry is essential to create the support and investment which sees individuals and congregations flourish and grow. It is the principle which was at work in Corinth, when Paul was able to devote himself fully to his apostolic ministry when he received the gift from the Macdeonian Christians in Acts 18.5.

This means that the decision some years ago to raise the average age of those entering training by 10 years over about 10 years was catastrophic for ministry and church growth in the long term, because it has led to the prospect of a whole cohort of clergy retiring at the same time, and a rapid drop in the number of stipendiary clergy in post. It is perhaps the single most devastating self-inflicted wound of the C of E. But it also means that dioceses which are encouraging vocations and generating ordinands are likely to be ones with the best chance of turning around decline and seeing numerical growth.

When I was responsible for admissions in the theological college I was part of, I did an analysis of where ordinands were coming from, so we could partner with them. But I also did some analysis that I have not seen elsewhere, but which seems pertinent. Dioceses vary in size, so you would expect larger dioceses to have more people in training for ministry. But the really interesting question is, which dioceses are generating more ordinands for their size? This is relatively easy to find out, since figures on Usual Sunday Attendance (USA) and the number of ordinands in training per diocese are available from different sources. They tell a striking story:

The Diocese of London had twice as many ordinands per church attender as the second most ‘productive’ diocese.

Why should that be? It could be that dioceses vary widely in the extent to which they encourage vocations and challenge people to consider whether God is calling them into ordained ministry. There was one year where Chelmsford Diocese had 105 people either exploration ordination, going through selection or in training at a college or on a course, whilst my former diocese, Salisbury, had not a single ordinand entering training, and I think this reflected different approaches to the question. There are certainly some exciting things happening in London, and a good number of churches challenging people about God’s call on their lives.

But I suspect there is another, more significant factor. Many, especially young people, in London are in a stage of transition. They might be in their first jobs, or considering buying a first home, and are at a stage of life when questions about the future are alive and up in the air. This social factor is, I think at least as important as other factors. In other words, London has a surplus of ministry resource through demographic good fortune.

This is surely significant for Blackburn Diocese, and other northern dioceses struggling to resource ministry. In email discussion about this, one friend commented that their needed to be a national strategy to get those coming from and training in the south to move north, whilst another commented that northern dioceses needed to generate their own ordinands. If I am right about the reasons for London being so ‘productive’, then the first of these responses is nearer the mark. The lack of movement from south to north is not just because ordained ministers are a bunch of ‘southern softies’; there are often good reasons for them to stay where they are, to do with family commitments. Any encouragement to move will have to be deliberate and intentional.

I would strongly suggest that diocese who are struggling to grow need to get into strategic partnerships with dioceses who have more resources, so that they can share insights and ministry.

In fact, this is already beginning to happen on a small scale. I understand that the Bishop of Lincoln has invited the HTB network to help with church planting in the City of Lincoln, and the same is also happening in Bournemouth, in Winchester Diocese. This is not about an exercise of power, or one diocese taking over from another. It is simply, in Paul’s word’s, that ‘there might be equality’:

Our desire is not that others might be relieved while you are hard pressed, but that there might be equality. At the present time your plenty will supply what they need, so that in turn their plenty will supply what you need. The goal is equality, as it is written: “The one who gathered much did not have too much, and the one who gathered little did not have too little”. (2 Cor 8.13–15)

Without such partnerships, it is going to be much harder for dioceses to turn around decline. Why should there be a spiritual north-south divide to match the economic one?

In the meantime, let’s pray for Julian Henderson and the whole diocese, as they tackle the challenge before them by the grace of God and in the power of the Spirit.

64 thoughts on “How to save a diocese”