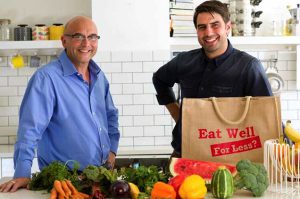 There is a small number of television programmes that I love to watch regularly when they are on. Monday nights are quiz nights, with Only Connect and University Challenge; Fridays from the Spring means  Gardener’s World; but there are two less regular mid-week programmes that I love. One is Michael Mosley’s ‘Trust me, I’m a Doctor’ which conducts pioneering research on common health questions. But the other is at the opposite end of both science and culture.

‘Eat Well for Less?‘ is presented by Greg Wallace (of Masterchef) and Chris Bavin (a presented and grocer), and a new series is currently showing on BBC1. They are both from the East End of London, so there is plenty of banter, and the show is pretty formulaic. It follows the same pattern every week, and the two of them do a great double act. They start by introducing a family, and they then watch at the adult couple doing a supermarket shop, with Greg and Chris ‘hiding’ in the stock cupboard watching the ‘secret’ filming (how secret can a whole film crew be in a supermarket?) until they ‘surprise’ the couple and present them with the facts of their shopping.

Every week, the couple do appear genuinely surprised at how much they are spending, even in the single shopping trip that has been spied on. In a recent show, the husband like spicy food, but his wife only ever cooked bland dishes, so he used to stop off on the way home from work to pick up a ready meal—a habit that more than doubled their total food spending. The families that are featured are not completely typical (otherwise the programme would be less interesting) but the total food bill for a family of four or five from one week to the next is typically between £8,000 and £10,000 per year. Given that most of the people are in semi-skilled rather than professional jobs, that is truly staggering. At the start, Greg and Chris do something of a good cop/bad cop thing, where they estimate how much their advice will save the family. Greg always gives a modest estimate, whereas Chris often thinks they will save around £80 a week—in round terms £4,000 a year—and Chris is almost always right.

At one level the programme is light-hearted, and everyone ends on good terms. But it carries some serious messages, and although Greg and Chris ham it up nicely, there are some shocking things that come to light. In fact, I think the programme communicates some profound messages.

First, food is never just about food. Even the act of simply getting a couple to talk about the food bill throws up a series of painful and deep issues in their relationship. At the lowest level, this might be that the couple (and their children) simply have different tastes in food, and like to eat different things. Not a few of the couples have handled this (or, rather, not done so) by each having a different, separate meal every evening, rather than talk and compromise. At a deeper level, conflicting views about the use of money emerge. But from time to time, there are some profound personal issues that have never been resolved.

In one programme, the mother had given up her employment in order to spend more time cooking for her children—and this included baking a cake every day as well as cooking the usual meals and additional snacks. The reason, it emerged, is that she was driven by her own experience of poverty, including her parents giving her white bread sugar sandwiches when they had nothing else to eat, so she saw it as an essential expression of her love for her children to give them the opposite. (As my daughter said, sitting next to me on the sofa: ‘She doesn’t need advice—she needs therapy!’).

Secondly, knowledge does not bring wisdom. When Greg and Chris confront the couples with their spending habits, they are not doing something that the couple could not do for themselves. They are not incapable of adding up their expenditure—they are just not in the habit of doing it, or of sitting down together and talking about it. It is not difficult to do an internet search on healthy eating or good recipes for whatever one’s eating preferences are, but you need the will to do it, and for most people they are too busy and too attached to existing habits to make the change.

Each programme takes a break from looking at the family of the week to explore healthy cooking, and to do at least one blind taste test. This consistently shows that the more expensive branded products are not the best value for money—and often not even the preferred choice in terms of quality and taste. And yet people keep on buying the expensive, branded products to their own detriment. One of the programme’s ploys is to remove all food labels from the family’s kitchen, so that they cannot tell whether they are still eating the same variety that they have always bought. And each week they reject a ‘changed’ item which they clearly do not like—when it turns out this is the product they are wedded to. It highlights the central lie of our economic system: the idea that people make rational choices, and that all we need is more information in order to make better rational choices. A national health strategy that depends on such assumptions (such as simply putting more information on packaging) is certain to fail.

Thirdly, the programme highlights the destructive power of consumerism. In one episode, where the family have been banned from eating frozen food and ready meals, and instead given fresh produce, one child picks up an avocado pear and asks ‘What is this?’ It is clear that one impact of our industrialised farming and food industry has been a profound disconnection between what we eat and where it comes from. In the last two years, I have found it a wonderful spiritual and personal discipline to be able to grow and eat some of my own food—even if it is a very small part of my overall consumption. It connects me with the earth from which all my food ultimately comes, and gives a new dimension to my gratitude for its provision.

But consumerism in relation to food has also broken the connections between people and even, as the programme shows, within families. The ability to choose whatever we want in the supermarket frames our whole approach to life, so that we cannot see why we shouldn’t simply make similar choices in every aspect of our lives. Shared habits and disciplines are lost, and relationships fracture. A couple of years ago, at a Grove Books conference for editorial groups, Michael Volland from Ridley Hall offered us a list of key issues in culture and church that we should be addressing—and high on his list was the loneliness created by a self-service culture.

It is surely no accident that the major discipline of the early church was a shared meal together—nor that two significant initiatives in the contemporary church—the Alpha Course and Messy Church—both involve a communal meal.

This leads to a final reality of our culture the programme reveals: the loss of basic disciplines of life such as managing money, making good choices, and keeping to routines of life. The famous Stanford marshmallow experiment demonstrated the connection between personal discipline and willpower, and longer term flourishing and success, by measuring the ability of children to defer gratification. Those who can wait without eating the marshmallow in front of them, on the basis of a promise of a second one in 15 minutes, have a level of discipline and willpower that equips them for life. But everything in our consumer culture is set up to make war on our willpower, not just in the area of eating (where we are encouraged to eat whenever we are hungry), but in entertainment (where we can watch any programme wherever and whenever we choose), in relationships, and in sex. The idea that we should delay sexual gratification until marriage was greeted with derision last week.

But one of the most telling lessons is this: you can only hear good news if you have heard the bad news. It would be interesting to look behind the scenes, and see how the programme is set up, and how much of it is genuinely a surprise to the couples involved. But the consistent impression is that they are genuinely taken back by what they discover. Greg and Chris are, in some sense, trusted experts, and they have come in with the explicit permission of the family—so the context of all the conversation is an established, trusted relationship where permission has been given. There is a genuine sense that Greg and Chris are concerned for the family’s welfare, and are not setting out either to score points or humiliated them in public.

But when the time comes, they do not hold back from confronting the couple with the reality of what they are doing—and it is sometimes very painful indeed. One week, the woman concerned actually burst into tears in the supermarket as Greg read out the total of all the till receipts from their week’s spending. There are times when I really want to fast forward through the middle part of the show, because the issues are so painful and so obvious.

And the end result of the process, as Greg and Chris journey with them—with their permission—is that their lives are measurably improved. Not only have the families saved money, but they have often moved on in their relationships with each other, improved their health, and rediscovered the enjoyment of family life together around the meal table where they share a common meal together. Many develop new skills in preparing and cooking food, and genuinely enjoy these discoveries.

I wonder if the church has anything it can learn from all that?

(An earlier version of this was published in 2016)

11 thoughts on “Food, culture, and the challenge of the gospel”