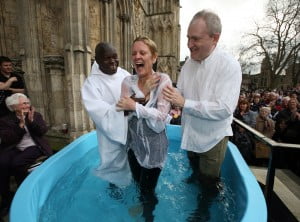 The Church of England has just published ‘additional’ texts in accessible language as an alternative to the current text of Common Worship Initiation Services. These have been produced in response to a motion brought by Liverpool Diocesan Synod to General Synod in 2011.

But the new texts have not, so far, gone down very well. ‘CofE removes sin and the devil from new christening rite: Rewrite of centuries old passage casts out ‘sin’ from ceremonies’ screams the Daily Mail.

Among other phrases abandoned in the experimental new christening rite are those referring to ‘the deceit and corruption of evil’, ‘the sins that separate us from God and neighbour’, and a promise to ‘fight valiantly as a disciple of Christ against sin, the world and the devil.’

Former bishop of Rochester Michael Nazir-Ali of course had something to say:

There has been a fashion in the Church of England to minimise depth and mystery in its worship because of the alleged need to make its services accessible. The new alternative service for baptism continues this trend. Instead of explaining what the baptism means and what the various parts of the service signify, its solution is to do away with key elements of the service altogether.

The current bishop of Willesden, Pete Broadbent, was rather more to the point:

This is crass. It’s baptism lite. It will not do.

and he used a tweet to point out that the new version had yet to be approved by Synod, adding: “And I’m rather hoping that it won’t! It’s only out for ‘experiment’. Or killing off.” Archbishop Cranmer blogger goes into some more depth, and concludes:

These ‘experimental’ texts are inadequate. The postmodern age is relativist and syncretist, and is becoming increasingly secular in order to propagate a conception of ‘neutrality’. But that is no reason for the Church to obscure the gospel: it is no reason to eradicate ‘Christ crucified’ in order to make church experience somehow more palatable to the un-churched, uninitiated and ignorant.

So what is going on, and what is the fuss all about? Well, the document presenting the additional text rather helpfully sets out the changes, with the CW text in parallel with the additional, alternative texts. It is worth reading through—but when I did, I have to say I was really shocked.

The opening statement drops the mention of ‘faith’, of God’s calling, and the phrase (from Acts 2.47) ‘adding to our number.’ None of this lost language was particularly ‘inaccessible’. The questions to the parents and godparents then appear to strip out mention of joining the community of faith. And it is really striking that the response to the questions (to congregation, parents and godparents) drops the phrase ‘With the help of God…’.

The introduction to the decision drops the biblical phrase ‘God calls us out of darkness into his marvellous light’ (from 1 Peter 2.9) and replaces it with ‘new life’, but drops here is the mention of sin. I have always thought the six-fold decision (replacing the three-fold one in the ASB) felt unnecessarily repetitious, and struggling for things to say, but the ‘additional’ text six-fold decision feels worse. 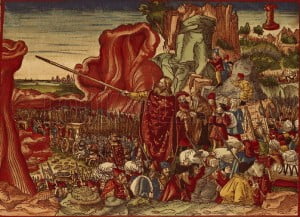 The range of biblical images in the prayer over the water are largely lost. (This includes what someone called on Facebook the ‘obscure’ reference to Moses. Yes, it is obscure, unless at some point you want people to notice that the Exodus motif is one of the major theological ideas in the New Testament about the ministry of Jesus.) The second option for the prayer contains the ludicrous phrase ‘send your Spirit upon this water’; I think we are in Lord of the Rings territory here.

On the profession of faith, I don’t agree with Pete Broadbent’s complaint that the Apostle’s Creed has been omitted. I think that the question and answer form is fine—but here it is worth comparing the proposed one with the one included in ASB Baptism. God is the ‘source of life’ rather than the ‘one who made the world’, and Jesus is the (unnamed) God the Son ‘who died for us and rose again’ rather than the one who ‘redeemed [hu]mankind’. Interestingly, in the world of pawn shops, I think the idea of ‘redemption’ is now fairly accessible. The Spirit ‘makes Christ known in the world’, which is a good job, since most references to the idea of the baptised being involved in ‘witness’ have been dropped.

There is more that could be said—I found the closing comments to be existential rather than rooted in corporate discipleship, reminding me a little of the revised Girl Guide’s promise to be ‘true to yourself’. But these are the things that stood out for me.

All these issue highlight some real problems. Firstly, they highlight some problems with our understanding of baptism. Baptism is a public act—not to be done in private, as a family occasion, but something done in public, as the picture at the top demonstrates. It is an act of ‘repentance for forgiveness of sins’ from the beginning (see Mark 1.4). It is about initiation into Jesus’ resurrection life (Romans 6.3–4), and incorporation into the fellowship of the church (the body of Christ, not the institution, 1 Cor 12.13). These are not particularly difficult ideas conceptually; in Scripture, they are often expressed in vivid, accessible metaphors. What is difficult is generating interest in these ideas amongst people who want a folk-religion baby-naming ceremony. (There is nothing wrong with wanting this; but baptism is not it.) The new additional words appear to be most concerned with accommodating this. The introduction to the new wording comments:

There is still a widespread demand for ‘christenings’ whether ‘stand-alone’ or integrated into the main service.

Or, as Andrew Brown expresses it:

Most comfortable westerners would find it absurd and insulting to be told that their children are in need of redemption from sin. What, then, can churches do? One answer is to move away from infant baptism altogether…Another is to maintain the ritual and de-emphasise the doctrine. That seems to be what the proposed changes in the Church of England were meant to do.

So let’s get rid of everything with any theological significance to make it easy for people to come and go and not be disturbed by the good news of Jesus! Michael Nazir-Ali points out what we actually should be doing:

Rather than the constant dumbing down of Christian teaching, whether for baptism, marriage or death, we should be spending time preparing people for these great rites of passage.

But this whole debate also highlights a problem with the C of E’s current position on liturgy. Was the issue highlighted by the Liverpool Diocesan motion really one about theology? Or was there another problem with the Common Worship baptism service? The introduction to the additional texts puts it like this:

Most of the objections to the Common Worship Initiation texts in their present authorised form are that they are not accessible to those who are unused to attending church. Clergy frequently find themselves conducting baptisms for families who have little contact with the Church, and sometimes on occasions separate from the main Sunday morning act of worship [Note: contrary to canon, and against the assumption of the liturgy.] In some instances there are few people present who have any real understanding of the Church’s language and symbolism. For the majority of those attending on such occasions, the existing provision can seem complex and inaccessible.

But it is not just outsiders who found the liturgy ‘complex and inaccessible’. There were some really good and important things in the thinking behind CW Baptism, in particular that adult baptism is the (theological) norm, and infant baptism derivative from it, and that baptism should normally take place in the main Sunday service. But the resulting text was pompous and cumbersome, in part due to the complicated structure of the vows, and idea of a ‘staged rite’ through the service, and the general pomposity of language CW has suffered in other places.

We seem to be making the mistake of thinking that ‘richness’ in liturgy comes from a cultured or classical register of language, rather than through the faithful appropriation of biblical metaphors—which are often fresh and arresting in their simplicity.

The second mistake is the strategy of addressing diverse cultural pressures—and diverse practice in the Church—by providing a wide diversity of texts, one of which must, of course, be rigidly adhered to. As the good old Daily Mail points out,

Since the original Book of Common prayer remains available to churches, there are currently six versions of the Church of England baptism service circulating in prayer books and internet liturgy which have been approved for use at different dates.

If the Church’s doctrine lies in its liturgy (which it does), and if public liturgy is both a key educator in discipleship, and a key expression of shared faith, then this is a bit of a disaster. CW Baptism does need change, but this change should be to a single, accessible text, rooted in biblical understanding of baptism, in continuity with the doctrine of the BCP, but with a simpler structure.

Here’s a great suggestion: if you want an accessible, clear, direct (i.e. brief) but theologically strong and biblically rooted baptism liturgy, there is one available for use: the ASB. In case you are interested in using it…er, I mean, seeing it for yourself as an historical example, I have set the whole text out in a blog post here.