Jim had learned to fly in the US Navy, and on retiring from the forces became a pilot for UPS. East Midlands Airport is a UPS hub, so Jim often found himself in Nottingham between flights. One year, he was stranded here at Christmas, and we met him at church on Christmas day and invited him to share our celebrations with us. I don’t think he will ever forget watching the Queen at 3 pm in revered silence—after which, as is customary, the men fell asleep on the sofa!

Jim’s home is San Diego, so when, six years later, I travel there for the SBL annual conference, Jim and I meet up and he takes me to his church—Rock Church, SD. The Rock was founded in 2000 by Miles McPherson, a former NFL football player and youth pastor, and has been noted as one of America’s fastest growing megachurches. The auditorium in the main church building seats 3,500, and they hold five services, every two hours, each Sunday. There are also three other campuses around the city, and a number of ‘microsites‘ set up to allow non-church-goers to experience the service, which is relayed by video.

The building is impressive, with a large bookshop and its own coffee shop, rooms for meetings, and a section for parents and young children that offers a video relay of the service. Rather fascinating are the dimensions; the distance from the entrance to the main stage inside is (I am told) exactly the same as the distance from the outer court to the holy of holies in Solomon’s Temple. I noticed during the service that Miles referred to the platform as the ‘altar’ when he invited people forward. On the way into the auditorium, blocks which form the entrance have each had a message written on them by those who contributed to the cost of the building. These were going to be painted over, but instead have been left as a reminder of the personal commitment and involvement of the congregation. Each row of seats has the name of a book of the Bible written on it, and each seat a verse reference. I was sitting in Daniel 3.17:

If the God we serve is able to deliver us, then he will deliver us from the blazing furnace and from Your Majesty’s hand.

(I feel sorry for the person sitting in Matthew 27.5!)

Our service started at 10 am, though people kept arriving all through the service. It began with an introduction in a pre-recorded video, which ended with an invitation to stand for the first song—odd to be invited to sing by someone who wasn’t there! The song was a chorus led very well by a rock band, and it suddenly felt as though I was back at a New Wine summer conference meeting, complete with lights, smoke and numerous cameras. This was followed by another video, which focussed on the extensive social action done by different members of the church, and a strong encouragement to get involved through one of the ‘Life’ small groups. That Sunday we happened to have a visitor who was a six-times Grammy awarding-winning gospel singer, so we listened to two songs by him. The second was about God’s protection and care of us, and had been written by the singer during a time of tragic bereavement.

We then watched a video about November Hero of the Month, a woman who was involved in the microsites, and she came on stage to a chorus of cheers and whistles. I felt I was immersed in a particularly American culture of affirmation—and it was rather refreshing! We then sang our second song, and at 10.35 Miles started speaking. His talk was an interesting combination of teaching and appeal, and at 11.07 it ended with an ‘altar call’, to which about 120 people responded—who were also clapped and cheered. We were then encouraged to give to the church by standing order or texting on our phones, and that was the end.

I was struck by a number of things:

1. Mile’s style was very conversational and informal, though was also peppered with a series of stock responses and involvement from the congregation, much as you would find in many traditions of black preaching. Whenever he said ‘Praise God!’ we had to respond ‘Jesus!’; whenever he said ‘Pick up your Bibles!’ we responded ‘The word!’

2. The tone was very much pitched at concerns of the young. From his manner and appearance, I actually thought Miles was in his 30s, but it turns out he is 54, two years older than me! (We were sitting quite a long way back.) I lost count of the number of jokes, illustrations and examples of wanting to meet the right girl or boy to settle down with. The one exception to this was that Miles appeared to be quoting from the Authorised (King James) Version, including its ‘thees’ and ‘thous’.

3. There was a very strong emphasis on what I would call basic pedagogy. When he spoke from a Bible passage, we were all expected to pick up our Bibles (which we had brought with us) and find the verse. On entering the service I was handed a small folder of information, which included the headings of the talk/sermon, with space to write notes, and all the Bible references, and on the reverse there was further material for me to read and study in my own time. The piece of paper was hole-punched so I could add it to my folder. Interestingly, Mile’s style was so informal and improvised that he actually skipped over the second of his three points! 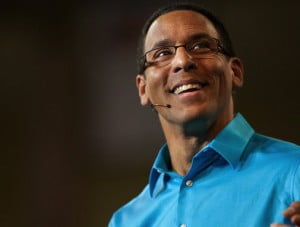 4. The talk was part of a series working through themes of the Lord’s Prayer, and this week was ‘Thy will be done.’ I was quite impressed with the way that this was expounded; there was a clear focus on prayer being about seeking God’s will, and not simply having our needs met, which sounded like a strong rejection of a ‘prosperity gospel‘ approach. Having said that, it was made clear that the command to the ‘rich young rule’ in Mark 10.21 was a command to him specifically, and shouldn’t be taken as something binding on us. And the kingdom of God was characterised by God’s presence, his reign, and his heavenly standards.

5. The gospel was expressed clearly and simply. It was about having our sins forgiven because of the death and resurrection of Jesus, and knowing we are loved by the Father. As a result of this, we would want to go out and serve others in practical action. Perhaps the most fascinating part of this was that the Holy Spirit was not mentioned—not even once! Jim and his wife Sharon are aware of this, since they are by background thoughtful Episcopalians who have also been influenced by charismatic renewal and the teaching of John Wimber. They have been encouraged that Miles recently had a more ‘charismatic’ experience of the power of God, and in fact Miles mentioned this in his talk.

It seemed to me that there is much here that British churches could learn from. It seemed that the cultural threshold that needed to be crossed to come into the church was very low indeed. There was a refreshing directness, energy and positive sense about the whole event. The service was no more than an hour and 15 minutes, and everything was very professional. It was very clear what you had to do to respond, and what being a Christian involved. And along with the large-scale arena, it was expected that everyone would be involved in a small group and take an active role in service of some sort. And given the response on the day, and the record of the church to date, a first impression would be that people are genuinely coming to faith, and not just transferring from somewhere else or returning to church after an absence.

On the other hand, it all felt quite undeveloped theologically. By that I don’t mean that it needed to be more complex or difficult to understand—just that it lacked theological shape, if I can put it like that. The most remarkable part of this was the lack of reference to the Holy Spirit—a little reminiscent of Acts 19.2. But it also came through in the way Bible teaching was communicated. For example, the verse we were given, Luke 1.19, is not the most obvious way to explore the idea that the kingdom of God is about God’s presence—you would do much better to explore Jesus’ proclamation of the kingdom coming in his ministry in either Mark 1.15 or the classic verse Luke 11.20 which identifies Jesus’ ministry with the kingdom. Despite the teaching content, I wonder how I would feel being invited to make a first commitment every week, suggesting that discipleship is a binary in/out affair, rather than the beginning of a journey of growth and discovery.

In conversation later, someone remarked to me that American evangelicals know their Bibles well—they just don’t know how to interpret them. It seems to me that in the UK we are quite good at interpreting our Bibles—if we ever get around to picking them up and opening them.

Overall, though, it was a fascinating experience to see ‘church’ done in a different cultural and theological context—and having a significant impact on its community.