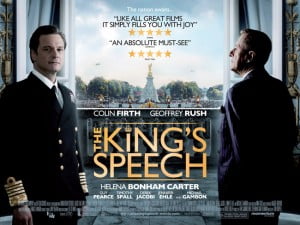 There were some moments of great poignancy—such as the look that Lionel gives his eldest son as they listen to Churchill announcing the declaration of war, knowing his son would be called up (though in fact he survived the war). And other moments of sheer genius—the synchronised playing of the second movement of Beethoven’s Seventh Symphony with the king’s speech at the outbreak of war which gives the film its title.

There is much pain; once Logue gains the future king’s trust, he hears of his painful childhood, how his nanny bullied him, how he was forced to use his right hand though left-handed, and the physically painful straightening of his knock-knees. ‘My father said to us: “I was terrified of my father, and I am going to make damn sure you are terrified of me!”‘. There is much humour too. When George gets out a cigarette, Logue rebukes him. ‘Please don’t do that.’ ‘I’m sorry?’ ‘I believe sucking smoke into your lungs will kill you.’ ‘My physicians say it relaxes the throat.’ ‘They’re idiots.’ ‘They’ve all been knighted.’ ‘Makes it official then.’

One of the main themes of the film is that of duty contrasted with self-indulgence, and this is embodied in the sharp contrast between the characters of Edward, who is focussed on his own desire for happiness with the woman he loves, and the dutiful Bertie.

Although the film involves a man overcoming a serious disability, it is neither triumphalist nor sentimental. Its themes are courage (where it comes from, how it is used), responsibility, and the necessity to place duty above personal pleasure or contentment. (Philip French)

This kind of discipline has been in the sporting headlines recently too, Alastair Cook attributing his success at the crease in England’s Ashes victory to the rigid regime of choir school at St Paul’s Cathedral:

What I have is the ability to grind out runs. I don’t know fully where it comes from but I think it might be the music, being eight years old and being away from home and having to be disciplined. I think it has a massive influence…They were probably the hardest five years you could ever expect an eight-to-13-year-old to go through. It teaches you to be independent. It was bloody hard work, 24 hours a week singing, eight to nine in the morning at choir practice, then school, then four to six for a service and more practice. It wasn’t Mickey Mouse, it was proper stuff and we were the best choir in the world. The concentration was the best thing about it, you couldn’t make a mistake.

The tension between duty and self-interest is frequently played out in churches, often with a generational divide. Older people continue to volunteer dutifully for jobs, whilst they seem to see younger people much more interested in what is in it for them. This is a pressing issue in a culture where volunteering is in rapid decline; Richard Steel points out in his forthcoming title in the Grove Leadership series that though in 2008/09 an amazing 71% of UK adults volunteered in some way during the year, with 47% volunteering at least once a month, the average number of hours spent volunteering per volunteer declined by 30% between 1997 and 2007. Given that most local church ministry is voluntary, this is sobering.

There is plenty of discipline needed in the Christian life—the discipline of prayer, of reading the Scriptures, of putting others first. But New Testament discussions of the life of the church community rarely focus on ‘duty’ as a principle. Rather, Paul focusses on the gifts of God given to all as the key impetus behind the life of the body. This is what defuses the false dichotomy of duty versus pleasure; as we recognise the overwhelming generosity of God in the gifts he has given us, we naturally seek to be generous to others in turn—with our time, energy, and gifts we have been given.

The question of gifting does play as a minor theme in The King’s Speech. When the king exposes Logue’s lack of formal qualifications, Logue falls back on his ability to treat previous clients. And, interestingly, in real life Logue embodied something of the spirit of generosity in his gifting. His income from wealthy clients allowed him to treat the poorer ones for free; out of what he had been given, he gave to others.

1 thought on “Duty or pleasure?”