“Rural churches have experienced falling congregations for decades” or so says the Guardian article about the Church of England proposals to remove the need for weekly Sunday services. The Church in the countryside is seen as being in the last stages, the death rattle louder than the dulcet tones of a handful of elderly people singing in a cold damp church in Orbiston Parva. This is what is in the background of this proposal from the Simplification group, to work toward finding a solution to the problem of rural churches. “We simply have too many buildings” I have heard from bishops and laity alike.

And yet, I think the statistics show a different story. The Released for Mission rural ministry report from early 2015 showed that just as many rural churches had grown and declined over the previous decade as urban churches. The same report says that around 40% of worshippers in the Church of England are attending rural churches, which serve only 17% of the general population. I think that bears repeating: over a third of all bums on pews in the Church of England live in these tiny villages, twice the attendance per head of the urban church. What’s more, if you rank all the dioceses by the proportion of the population attending church, it’s the rural dioceses at the top. The one exception is Lincoln, which had a long term strategy of reducing clergy numbers and putting more and more churches together, a strategy they have since reversed. Would that all dioceses would learn from their mistake!

Now why do I say this? Because there is a tendency, and worryingly quite a top down tendency, to want to follow the people, who are of course in the cities and towns. Even with a 50% increase in ordinations, as hoped for, we will only just replace the baby boomers who are all retiring. So if cuts need to be made, we should cut from the countryside, and focus on the population centers. After all, we spend nearly 5 times more per head on ministry to rural people than we do for urban estates. How can we justify that? Are we, as Bishop Philip North has said, a Church that has taken a preferential option for the rich?

But this is a bizarre way of looking at the way the Church pays for ministry. There isn’t a central pot that gets spread around; the vast majority of ministry is paid for by the churches who receive it. Of course rural clergy have smaller populations to serve, that’s just sheer logistics, but not only do these small struggling churches pay for that, but they often subsidise ministry in the urban estates as well (as well they should!). To put it in terms that someone with a “mini-MBA” might understand, if you had a network of retail outlets, and some were more expensive to run but also made more profit, why on earth would you start shutting them down? Of course you wouldn’t. And it’s worth remembering that poverty isn’t only an urban phenomenon, it’s just more hidden in rural areas. Most of those who have come to faith or started attending our churches in my time here are from working class backgrounds, and some live on or below the poverty line.

Synod will be looking soon at changes to the canons to allow churches to forgo the current requirement to have morning and evening prayer and Holy Communion in every parish church every Sunday. The canons already have an exception built into them, Canon B14A, specifically mentioning benefices with more than one parish church, that they can organise the worship of the churches however they see fit as long as the bishop is happy. Synod has already given initial approval to the suggestion that there be some churches which are allowed to cease having regular worship and to become “Festival churches”.

I have mixed feelings about this. Yes, I want churches that are facing closure to have other options, but I don’t want churches to be pressured into ceasing regular worship because of lack of clergy or funds. The four rural churches I serve still have weekly worship, and we have lay ministers who between them take around half the services. We are blessed to have around 100 in our pews on an average Sunday, but only because we keep our church buildings open for worship. 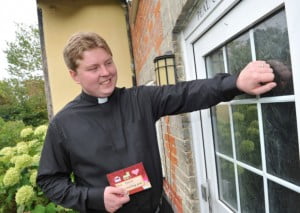 Yes, we have to fund ministry to urban areas and deprived estates. So here is a plea to those involved in strategy and decision-making in the church: please keep the rural church strong, so that we can continue to partner with our brothers and sisters in our mission to the whole of England, and beyond.

20 thoughts on “Defending the rural church: Delusional or Essential?”