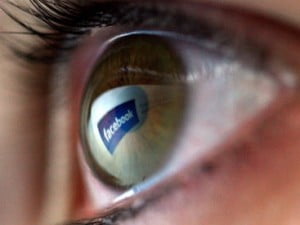 Vicky Beeching has written on children and the internet this week in the Church Times. The main point of her argument is that Christian parents shouldn’t see the internet as a dangerous thing to be avoided, but a tool to be used, and that we should encourage children to use it responsibly.

She hits her target pretty well—but I cannot help thinking that she is aiming at the wrong target. I don’t know of any parents who are attempting to prevent children using the internet. Perhaps they did 15 years ago, when it was emerging as a social and technological force. But no child in secondary—or even in primary—school can actually function without internet access. Every parent and teacher knows perfectly well that the homework which asks ‘Research subject X’ is really simply saying ‘Read the Wikipedia article on X and express some of it in your own words.’

We do need to help children use the internet responsibly, but I am not sure Vicky’s article really highlights what this might involve.

‘Technology is a tool. It is not entirely neutral, but it is predominantly neutral, and capable equally of good and harm.’

Well, yes and no—we do need to reflect on what of tool the internet is. I am not sure any ‘tool’ is neutral. When bicycles became widely available, it allowed people to travel to the next village to meet others, and changed the way families and marriage developed. That might have been good or bad, but it was certainly a change, and in that sense was not ‘neutral’. And the internet similarly alters the way we relate. It might be fun to ‘invite a friend who lives miles away to dinner via Skype’ but unless we teach children that relating via a screen is not the same as having the person in the room, we are missing out on something vital about human relating. Only this week, I was talking to a publisher who ‘really believe[s] in face-to-face meetings’. There is nothing like it. We as humans are not simply a collection of ‘likes’, networks and photos which we choose to present ourselves—we are bodily beings, and our bodiliness matters.

As has been well documented, the constant use of the internet is affecting the way we think as well. Nicholas Carr, in The Shallows, demonstrates the profound impact of the internet on the ability to think.

The Shallows draws on the latest research to show that the Net is literally re-wiring our brains inducing only superficial understanding. As a consequence there are profound changes in the way we live and communicate, remember and socialise – even in our very conception of ourselves. By moving from the depths of thought to the shallows of distraction, the web, it seems, is actually fostering ignorance.

This might be important for adults, whose brains are more formed, but it is devastating for children. To see the impact of this, just look at the decline in the numbers of Americans reading books: 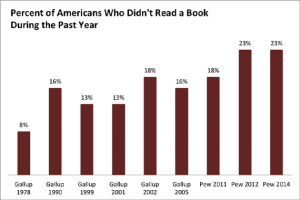 It’s not all bad news, but it does confirm the notion that constant use of the internet inhibits the ability to follow thinking through.

Blaise Pascal commented in his Pensees:

In the hyper connectivity of the internet, this ‘aloneness’ is being lost. To experience silence is a powerful tool for self-reflection, as the BBC TV series ‘The Big Silence‘ showed powerfully. (You can watch it all on YouTube to see the effect.) The noisy cacophony of social media chatter is depriving both children and adults of moments of silence, and we need to restore this opportunity to them.

So what should we do in practice? I would suggest five elements of establishing boundaries for internet use.

1. Ensure you have filtering in place.

Some people react to this saying ‘You cannot stop children finding harmful material on the internet; they will always find a way round it.’ As far as I can see, that is a bit like saying ‘Leave sharp kitchen knives out on the table; they will find them anyway’ or ‘Don’t bother putting medicines away in cupboards out of children’s reach.’ It is just common sense.

The NSPCC’s report on younger children and social networking (November 2013) found that “around half of 11- and 12-year-olds in the UK have an under-age profile” on websites that require a minimum age of 13.

Surely a basic principle we need to teach our children is honesty. We have deleted Facebook accounts for our children before they were 13, and the condition of entry was that we were their ‘friends.’ This is not about snooping, or intruding, but about the same basic accountability that we would expect ‘IRL’. Of course, there are plenty of other ways that our kids connect with friends; but where we can ask for accountable use, why shouldn’t we? It’s not a bad discipline for parents too—that their children can see how they use social media.

3. No phones at the meal table

Gadgets often take the blame for ruining family communication, as parents and children sit at a dinner table, all staring at their mobile devices rather than engaging with each other. This doesn’t have to be the case.

No, it doesn’t. Ban them. Period. Mealtimes are family times, times for talking and not texting or accessing the internet. Ever since we have insisted on this, our children have become the main enforcers—as I discover if I ever reach for my iPhone!

4. Switch off at night

Using a computer screen at night interferes with the body’s natural circadian rhythm, and can seriously disrupt sleep. (If you do have to use your computer in the evening, install f.lux or something similar to minimise the harm.) Being active online late into the evening is even more disruptive. So pull the plug. Our rule is that the house goes offline at 9.30 pm, so our children have 30 minutes internet-free before going to sleep. And you know, I think it is quite good for me too!

Mark Meynell is a great advocate of the value of ‘German’ board games for family life. So from time to time we have internet down time and play a game. Playing cards is also a great relationship-builder.

The internet is incredibly enriching, and as Vicky says, we don’t need to be over-protective. But we do need to be protective, set boundaries—and teach our children that, however exciting the internet is, real life is better.

3 thoughts on “Children and the internet”