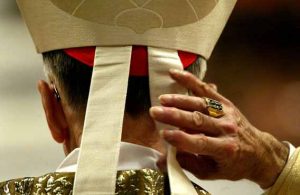 Why do Church of England bishops wear mitres? In our age of visual media, there is a tendency to reach for visual symbolism; it seems sometimes that those on television they don’t think they are actually talking to a bishop unless the person is wearing a purple cassock. But there are many reasons for saying goodbye to mitres once and for all.

The most obvious one is that mitres are singularly unflattering. I did once meet bishop on whom the mitre didn’t look completely stupid—but it was a long time ago, and said bishop has long retired. On most people they just look daft—ill-fitting, unflattering and awkward.

The second reason is rather important, and oddly is something that many people are not aware of (including, it seems, not a few bishops): wearing mitres is not particularly Anglican. The practice more or less ceased at the Reformation, and only crept back into use through the influence of the Oxford Movement at the end of the nineteenth century. Colin Buchanan, former Bishop of Woolwich, comments:

Edward King, Bishop of Lincoln 1885–1910, was the first English bishop generally reckoned to have worn a mitre. I suspect that Winnington-Ingram (Bp of London 1901–1939) and Lang (Stepney before 1909, then York till 1928, then Cantuar 1928-1942) really popularized the mitre—Lang was the first Canterbury to do so. No mitres were worn at George V’s coronation in 1911 (though there were questions about whether they should be wearing them), and bishops did wear mitres at George VI’s in 1937. It sits with (a) Roman theories of authority, (b) pomp, (c) self-inflation, and (d) the second generation factor—that folk think they are following a deeply entrenched tradition. It is not an admirable habit…

A number of bishops, including Maurice Wood, have made it clear from the start they would never wear one. I am ready to go a little way with those who really want me to (while telling them I think it is stupid). But they have to ask me—I never just reckon to wear one. And in liturgy I only wear it coming in and going out—it has no liturgical purpose.

So we need to note that the general wearing of mitres by bishops is a practice less than one hundred years old, and until quite recently it was far from universal.

The reasons for this lie in the origins of the use of a mitre. The biblical derivation comes from the headgear of the high priest who was to wear a ‘turban’ (mitznefet) which distinguished him from the other priests.

This is set out in God’s instructions to Moses in Ex 28:

Alongside this, in the Orthodox Church the mitre is a symbol of power and authority, (perhaps originating with the inscribed plate attached to the turban which appears to be like a crown, Ex 39.30) and (like the papal tiara) is modelled on crowns from the Byzantine Empire.

(In all this, there are two wonderful ironies. The first is that, according to the Talmud [B. Zevachim 88b] the high priest’s turban is to remind him of the presumption and sin of the people.

The other is that the camouflaged ‘clown hat’ of the modern Israeli army is also called a miznefet after the turban of the high priest; it, too, has a function related to power and authority—but it, too, looks extremely silly.)

It is now becoming clear why bishops in the Church of England dropped the wearing of mitres from the Reformation onwards. A piece of attire which communicates absolute authority and sacerdotal priestly ministry has no place within Anglican understandings of ministry. I recently posted a picture of myself in suit and tie, and a friend commented ‘I see you are disguising yourself as a lay person’. I was doing no such thing; the Church of England’s theology of ordination does not remove the ordained from the laos, the people of God, but sets them apart in terms of training and supporting them to minister. They have authority to teach, but it is an authority within the people, as primus inter pares, first amongst equals. I can never appeal to the authority of my teaching simply by dint of being ordained, by appeal to my office; I can only appeal to its correspondence with Scripture and the apostolic inheritance. Being ordained priest or presbyter, does not end one’s ministry as a deacon, and being ordained bishop or overseer does not end one’s ministry as either deacon or presbyter. By the same token, being ordained into any of these three historic orders does not remove the ordained from being part of the people of God. This understanding is captured rather nicely by the saying of St Augustine in his sermon on the anniversary of his ordination:

“Where I’m terrified by what I am for you, I am given comfort by what I am with you.  For you I am a bishop; with you, after all, I am a Christian.  The first is the name of an office undertaken, the second a name of grace; that one means danger, this one salvation.  Finally, as if in the open sea, I am being tossed about by the stormy activity involved in that one; but as I recall by whose blood I have been redeemed, I enter a safe harbor in the tranquil recollection of this one; and thus while toiling away at my own proper office, I take my rest in the marvelous benefit conferred on all of us in common.

The modern revival of wearing of mitres by Church of England bishops signals in powerful terms the opposite, that they are a group set apart. The bishop who ordained me believed that mitres were vital, because their flame-shaped outline symbolised the bishop as the dispenser of the Holy Spirit at confirmations and ordinations, something the liturgy actually contradicts: at no point does the bishop pronounce ‘I ordain you’, since the language is all about what God (and not the bishop) is doing and of course it is God who bestows the Spirit.

Two years ago, Edward Dowler wrote in the Church Times about the symbolic importance of the vesture of ministers in response to comments by Pete Broadbent, the Bishop of Willesden. Dowler makes the observation:

Distinctive clothing for the clergy, or indeed anyone else, is never just decoration, dependent on a particular individual’s or community’s aesthetic taste. Like the clothing of our parent religion from which it is in part derived, the distinctive clothing that the Church has handed down to her ministers comes freighted with theological significance.

In this he is absolutely right—but his defence of current practice ignores the historical discontinuity in practice with previous centuries, and fails to ask whether the symbolism currently communicated is the right symbolism. The more power we recognise in vesture, the more important it is that we wear the right things for the right reasons. Mitres do not just sit uncomfortably on the heads of our bishops; they sit awkwardly with the Church of England’s reformed catholic understanding of ministry, rooted as it is in the patterns of the New rather than the Old Testament. The symbolism of the high priest belongs either to Jesus alone, or to the whole people of God; we no longer have the sacerdotal priestly caste that existed in the Old Testament.

There is one final and serious objection to the wearing of mitres. I noted how important these things can be in our visual media age—and we need to reflect on what such clear visual signals communicate. To most, and I would suggest especially the young, the sight of bishops in mitres puts them in another world. It is world of the past, a world of nostalgia, a world of deference—and mostly a world which is quite disconnected from present experience and values. It confirms for many the impression of a church irrelevant to modern questions, contained in its own bubble of self reference. And in its hierarchical understanding of authority, it is a culture of which contemporary society is becoming less and less tolerant, possibly for good reason. In her damning report on the handling of the evidence relating to Peter Ball’s abuse of children, Dame Moira Gibb highlights the problems in the culture of the Church:

We were struck during this review by a manifest culture of deference both to authority figures in the Church, particularly bishops, and to individuals with distinctive religious reputations—or both. This deference had two negative consequences. Firstly, it discouraged people from “speaking truth to power.” Then, on the few occasions where people did speak out and were rebuffed by a bishop—the summit of the hierarchy—there was nowhere else to go.

Nothing symbolises the ‘culture of deference’ like the wearing of mitres. It is time for them to go. (First published in 2017.)

288 thoughts on “Bishops should throw away their mitres”