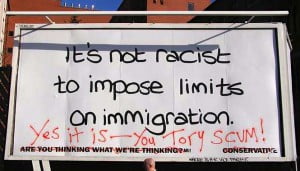 When you wake up to hear that the Archbishop of Canterbury is the lead item on the morning news, then you feel something has either gone very right or something has gone very wrong. That’s what I felt last Friday, and the comments that prompted the headlines were in Justin Welby’s interview with Parliament’s The House magazine.

“There is a tendency to say ‘those people are racist’, which is just outrageous, absolutely outrageous,” he says. “Fear is a valid emotion at a time of such colossal crisis. This is one of the greatest movements of people in human history. Just enormous. And to be anxious about that is very reasonable.”

There were two instant (and predictable) reactions. One was to say (with Giles Fraser) ‘But much of the fear of migrants really is racist, archbishop’, offering the kind of blanket suppression of thinking about the serious issues involved that Welby was appealing for. (It also [wilfully?] misreads what he said: he was not referring to the fear of migrants but to fear of the effects of migration.)

The other was to blame Welby and his PR team for incompetence.

He and his staff were naive at best if they didn’t realise that parts of what he said could (and therefore would) be picked up by the usual suspects as some sort of justification for their repellent attitudes.

This raises the interesting question of whether I am responsible for people taking my words out of context, misreading them and making headlines of them. (This is an especially interesting question in relation to the Bible: is God responsible for the way people misread the Scriptures?) Of course, anyone in the public sphere needs to consider that all comments are capable of misinterpretation, and we need to avoid giving hostages to fortune. But I wonder what we could say if everything must be couched in terms that could never be misinterpreted? I’m not sure we could say much.

The Economist’s religion and culture blog Erasmus did highlight the unusual nature of the comments; fear is most often something that Christians (and other religions) says we should be free from, except the fear of God. “Fear Him [God] ye saints, and you will then have nothing else to fear…” And yet there is a palpable sense of fear and uncertainty within the communities most directly affected by migration, and these are often communities that Government leaders are not part of (Shadow Chancellor John McDonnell is a refreshing exception to this). Here is one person’s experience:

I live in an inner city area where there is a drastic shortage of quality housing and school places. We have a large Muslim community who live in a parallel world from everyone else and a thriving criminal fraternity from east european countries. These issues create concern and fear and, I must say, that fear extends to the immigrant community who have been here for years. Ironic, I know, but its a fact.

Another of the ironies of migration is that politicians often talk aspirationally of migrant communities (of each era) integrating with the indigenous population, but all the evidence is that they do not—at least for a long time—and in fact that they should not. Research shows that immigrant communities, coming for whatever reason, make the transition to their new context much better if they are in significant sized groups so that they can help and support one another during the period of change—and preserve their own cultural identity and values.

Welby himself highlights the issue of pressure on resources at a local level, and the Express picks up on this.

With housing waiting lists longer than ever, too few school places, queues out of the GP surgery door and hospitals at breaking point, there are legitimate concerns that our relatively tiny island will not be able to cope with a further influx of displaced people. 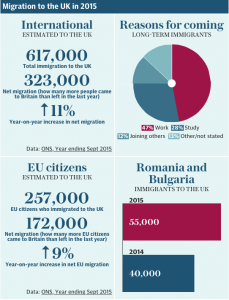 From a purely analytical point of view, this raises the question of emigration and net migration; if all EU citizens living in the UK returned to their own countries tomorrow, and in turn all UK citizens living in other countries in the EU returned here, what would be the net effect? The official figures suggest that this would balance out, since there are apparently just under 2 million of each. But, rather shockingly, the official figures are almost certainly wrong.

According to official figures 1 million EU migrants came to Britain over the past five years, but over that same period 2.25 million registered for national insurance numbers.

This suggests that EU immigration to the UK in the last five years alone significantly outweighs UK citizens living elsewhere in the EU. And this masks further asymmetry: the majority of UK citizens abroad are either taken there by (usually well paid) work, or they have retired there, taking significant capital sums with them. A good proportion of EU immigrants come to the UK to do relatively unskilled work, which is much better paid than even skilled work that they could do at home. I travel a lot, and I am in the habit of asking those who sell me coffee at stations and on trains where they come from; I cannot remember the last time I was served by someone British. The economic reality of migration is that much of our food production industry would collapse without migrant labour.

This enormously complicates the debate about how we respond to the refugee crisis. Justin Welby has long been critical of current Government policy, and he repeats this in The House interview.

Just days before our interview Welby visited Germany to witness first-hand the response of the German church to the crisis, and take lessons from their “very effective” collaboration with the government. “I was in Berlin, and the churches there are doing the most extraordinary things, as are the German people,” he says. “They took 1.1m last year. And it does make 20,000 over several years sound really very thin.”

Britain is “leading the world”,” he says, when it comes to offering humanitarian support in the region. “But it’s got to be both, not either/or. What the government is doing in the refugee camps and at the origin of the issue is really excellent. We’re taking an extraordinary lead there. It shows what we can do. Can we not show the same capacity and strength here, as we do there?”

Andy Walton points out very helpfully the whole range of things Welby has been involved in which demonstrate his bona fides in this debate. The Independent complains that ‘at a time when the plight of refugees in Europe is more prominent than ever, it is extremely dangerous to present “fears” about wider immigration as simply not being racist, as the archbishop has done.’ Yet it is clear that Welby is at least as critical of those reluctant to welcome people in need.

But the discussion about what we should do by way of planned migration to help those in desperate need is always overlaid on a context of the challenges of uncontrolled and unplanned migration. As Dominic Raab, in Michael Gove’s justice department, points out, free movement of people is an EU commitment, and appears to be a central commitment to membership of the EU which cannot be negotiated away. 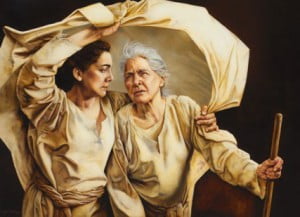 Does biblical theology have anything to contribute to this debate? Christians have often been quick to point to the themes of radical hospitality in both Old and New Testaments—care for the orphan, the widow and the ‘resident alien’, who more likely has come as an economic migrant than as a refugee into Israel’s borders, is a consistent theme in OT ethics. This is picked up in the New Testament in the consistent emphasis on the need to show hospitality to strangers, ‘for thereby some have entertained angels unawares’ (Heb 13.2, alluding to the story of Abraham in Gen 18). This is also in response to the early Christian community’s awareness that they themselves were resident aliens, pilgrims or perhaps refugees within their own culture (1 Peter 1.1). All this offers compelling support for a more compassionate and radical response to the refugee crisis, as Welby highlights.

But the challenging counterpoint to that welcome is in the insistence in the OT that the ‘resident alien’ adopt the culture and values of the people of God with whom they are sojourning. In the archetypal story of the refugee’s journey, the book of Ruth, one of Naomi’s daughters-in-law Orpah returns to her native country, but the other, Ruth, travels with Naomi making this declaration ‘Where you go I will go, and where you stay I will stay. Your people will be my people and your God my God’ (Ruth 1.16). In the NT, Paul’s theology is one of radical hospitality to the Gentiles—the grace of God to his people the Jews now overflows to the whole world. Yet the demands of this inclusion are fairly stringent, and the welcome involves leaving behind key aspects of ‘what some of you were’ (1 Cor 6.11) and an adoption of key elements of Jewish culture and ethics.

This does not offer any simple corrective to issues of migration—after all (despite what you might read in some tabloids or on certain blogs) the UK is not the Chosen People, and our values don’t align with the teachings of the Bible in manner of an ancient theocracy. But it does highlight the issue underlying many others—that when people move, they bring with them cultures and values, and so migration is never a value-neutral exercise.

In particular, the EU’s commitment to ‘the free movement of people’ as part of the ‘free movement of business and services’ is making a specific value judgement. It appears to be treating people as not much more than units of production, and assuming that any differences of culture can be held within overarching European shared cultural values. I cannot help thinking that it is this, more than anything else, which needs questioning—and answering it might unlock a more compassionate response to those who are the real ones in need of a migrant’s welcome.

9 thoughts on “Are we allowed to fear immigration?”