They say that, in war, the first casualty is truth—and in the war of words about World Vision USA’s decision to change their terms of employment this certainly seems to be the case.

Richard Stearns, President of World Vision USA, announced in an interview with Christianity Today that its policy restricting employment to Christians who are either single and celibate or marriage will be adapted to recognise same-sex marriage. (This does not affect the international umbrella organisation nor any of the national organisations, which are all separate entities.)

World Vision’s American branch will no longer require its more than 1,100 employees to restrict their sexual activity to marriage between one man and one woman. Abstinence outside of marriage remains a rule. But a policy change announced Monday [March 24] will now permit gay Christians in legal same-sex marriages to be employed at one of America’s largest Christian charities.

It is worth reading the piece in full. It seems to me that Stearns’ explanation is somewhat disingenuous at three points. Firstly, he comments:

“Changing the employee conduct policy to allow someone in a same-sex marriage who is a professed believer in Jesus Christ to work for us makes our policy more consistent with our practice on other divisive issues,” he said. “It also allows us to treat all of our employees the same way: abstinence outside of marriage, and fidelity within marriage.”

This suggests that WV are not changing their position, but simply adapting it to changes in culture and the definition of marriage. But this is to ignore that the whole debate centres precisely around what marriage is, and whether a same-sex union can properly be called marriage. And it is not just Christians who are asking this.

Secondly, Stearns comments that this is a logical extension of their decision to defer to the autonomy of local churches on other matters of controversy:

“Denominations disagree on many, many things: on divorce and remarriage, modes of baptism, women in leadership roles in the church, beliefs on evolution, etc.,” he said. “So our practice has always been to defer to the authority and autonomy of local churches and denominational bodies on matters of doctrine that go beyond the Apostles’ Creed and our statement of faith. We unite around our [Trinitarian beliefs], and we have always deferred to the local church on these other matters.”

In other words, he is saying that, in this decision, WV is simply refusing to decide on the matter for themselves, but allowing churches to do so. But, as the old saying goes, not to decide is to decide. In deferring to the (conflicting) views of different denominations, Stearns is saying that this is a matter of adiaphora between churches. It is something on which we can agree to disagree. WV are perfectly entitled to say this, but I don’t think it is possible to present this as a lack of decision. It really is a decision on the status of the question—and that is the heart of the matter.

“This is also not about compromising the authority of Scripture,” said Stearns. “People can say, ‘Scripture is very clear on this issue,’ and my answer is, ‘Well ask all the theologians and denominations that disagree with that statement.'”

So, given that the main questions in the debate are precisely ‘Is same-sex marriage in fact marriage?’, ‘Is the Bible unclear on this?’ and ‘Is this something on which we can agree to disagree?’, Stearns’ rationale looks less than persuasive.

Not surprisingly, conservative evangelicals in the US have reacted strongly by withdrawing their support from World Vision and criticising their stance. And this is where the nonsense really begins. Well-known US blogger Rachel Held Evans tweeted a link to the Sojourner’s blog:

It is easy to see that over the coming weeks thousands of evangelicals will withdraw their support from World Vision. And Dr. Moore is absolutely right. As this begins to take place, thousands of children will suffer because of the lack of funding from their former sponsors who decided that this theological and political issue was more important than their life. It is a sad day when followers of Jesus Christ will chose to make a theological/political point by withholding funds from children in life-and-death situations.

The comments here make some quite extraordinary assumptions:

More sophisticated, but I don’t think any less mistaken, is ‘Archbishop Cranmer’s clever retelling of the Parable of the Good (Gay) Samaritan:

In reply the Chief Exec said: “A six-year-old starving boy and eight-year-old trafficked girl were going down from Djibouti to Hargeysa in Somaliland, when they were attacked by fanatical militia. They stripped the starving boy of his clothes, beat him, and then raped and mutilated the genitalia of the girl, and went away, leaving them both half dead. Justin Taylor of The Gospel Coalition happened to be going down the same road, and when he saw the children, he passed by on the other side. So too, Russell D. Moore, president of the Ethics and Religious Liberty Commission of the Southern Baptist Convention, when he saw the children lying there, he walked on by. And also Denny Burk, professor at the Southern Baptist Theological Seminary, when he came to the place and saw them, passed by on the other side.

But a gay guy in a civil partnership, as he travelled, came to where the children were; and when he saw them, he took pity on them… 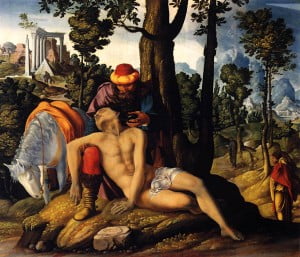 Clever as it is, I think this comment makes two inexcusable errors. First, the idea of naming these individuals and suggesting that they ‘walked by on the other side’ is really hideous. In the comments, someone has asked ‘Did you know that Justin Taylor has adopted multiple orphans? Hardly the most fitting to cast as the bad guy in this.’ I am not sure of the truth of this, but surely we cannot be accusing others of lack of compassion without knowing more about them—and even then, is this the right thing to do?

Secondly, Jesus told the original parable to highlight the importance of action. But that did not stop him criticising the belief of the Samaritans in the sharpest terms:

You Samaritans worship what you do not know; we worship what we do know, for salvation is from the Jews. (John 4.22)

If he said at one point ‘Believe what the Pharisees teach, but don’t do what they do’ (Matt 23.3), here he appears to be saying ‘Do what the Samaritan does, but do not believe what he teaches.’ Why do we find it impossible to say either of these? Once again, every side in this debate is claiming Jesus for their own. And yet we fail to do the thing he did: be radically engaging, but also be incisively discerning.

We sponsor two children through World Vision, and one through Compassion. We are not going to making any changes in a hurry. But before any more nonsense finds its way out, I wonder whether we all need to read the WV statement again, and then read some of the carefully thought-out, clearly reasoned objections to this, such as those from Kevin deYoung, Matthew Lee Anderson and even Justin Taylor himself.

Let’s give people the respect of considering the best of their arguments, on all sides, and not the worst and most simplistic.

World Vision USA have now reversed their decision. I suspect a number of other things will follow:

1. They will need to do some hard thinking about their publicity. This has been something of a PR disaster.

3. People will talk about how WV USA have been ‘bullied’.

4. No other organisation will imagine that announcing a change in policy in this area will be seen as ‘neutral.’

5. Someone might ask why WV made this a big announcement at all, rather than doing it quietly, why they hadn’t anticipated the reaction, and what led to the decision at all.

A number of ‘progressive’ evangelicals have posted on Twitter or blogged that around 10,000 sponsorships have been cancelled. I think that is  a great shame—we have not cancelled ours. My quick sums estimate that this represents about £3m of support. World Vision US’s budget (I understand) is around $1.1 bn. So the cancellation represents 0.3% of their turnover; the other 99.7% of support through this conservative evangelical relief agency continues.

There is a fascinating post about the issue, roundly condemning both sides, at the OnFaith blog.

22 thoughts on “A lot of nonsense about World Vision”