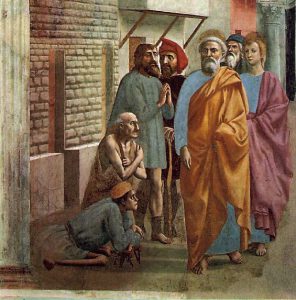 As we anticipate another strike day by junior doctors, Dr John Pike, a GP in the Bristol area and regular reader of this blog, offers these reflections on the current state of the Health Service.

Aneurin Bevan, the founder of the NHS, once stated: “Illness is neither an indulgence for which people have to pay, nor an offence for which they should be penalised, but a misfortune, the cost of which should be shared by the community.” And so the principle of the NHS was established: universal healthcare; free at the point of delivery; paid for through taxation. Emergency care is provided by GPs and hospitals 365/24/7. There is a strong biblical mandate for all this, as we see below.

However, in recent years we have witnessed what some regard as a creeping privatisation of the NHS. This has included an increasing role for the private sector in providing healthcare and there have been cases where companies which cherry picked services which they thought would be profitable later pulled out when this did not materialise, leaving the NHS to pick up huge debts. There have been inequalities in provision and the postcode lottery, funding problems and allegations of personal financial gain for some closely involved with commissioning. Patients have suffered through long waits for emergency and outpatient treatment.

Staff are unhappy as well. The NHS has always depended on the goodwill of the 1.3 million people who work for it, the largest employer in Europe. Everyday, all employees work in very stressful circumstances, beyond contracted hours, to ensure that patients get the best care that can be provided within limited resources. Increasingly, overworked staff feel unvalued, not properly remunerated for their work and skills, and being expected to perform to the highest standard in an unsafe, overstretched and inadequately funded environment.

The Secretary of State for Health, Jeremy Hunt, recently announced that he would impose a new contract on Junior Doctors in an attempt to enforce the seven day routine NHS that was promised in the Conservatives’ General Election manifesto. This was based on claims, since disputed, that more patients die in hospitals at weekends. Junior doctors, and many consultants and GPs, feel an imposed contract would ultimately harm patient care, through doctors being over-tired and working with low morale, that it would amount to a pay cut for more work and would provide an extra intolerable level of stress in excess of that which juniors already face. It has been questioned whether the NHS can afford a routine seven-day NHS when even a basic service is under-funded. The strikes have already harmed patient care and a mutually agreeable resolution is necessary but seems as remote as ever. There are early signs that many juniors will move abroad if the contract is imposed.

In recent years, spiralling workload, rapidly rising costs of medical indemnity insurance (especially for those doctors providing care out of hours), and increasing levels of bureaucracy and of clinical governance have led to worsening levels of stress and morale for family doctors and adverse effects on quality of care. Funding for General Practice as a percentage of the NHS budget fell from around 10.5% in 2004/2005 to around 7% now, forcing practices to make redundancies. Some practices around the country became no longer financially viable and were forced to close. There has been a recruitment and retention crisis, with doctors retiring early, training vacancies unfilled and GPs moving abroad or leaving medicine. Patients have inevitably suffered.

Can scripture help inform our thinking on how we should respond to the issues this raises?

Everyone was filled with awe at the many wonders and signs performed by the apostles. All the believers were together and had everything in common. They sold property and possessions to give to anyone who had need.

This particular text does not specifically mention healing, but a miraculous healing is recorded in the following chapter, the healing of a lame beggar by the temple gate called Beautiful (Acts 3:1-16). There are further examples of healing in Acts 5:12-16, but there is also an example of healing denied (2 Cor. 12:7-10).

What do we learn from scripture about the care of the sick? All this scripture can teach us much that is pertinent to the problems the NHS now faces:

Today, many others must accept their responsibilities in resolving the current crisis.

The government has to provide the healthcare service within finite resources. Romans 13:1-7 provides the key text on respecting the governing authorities, which have all been established by God. However, when government policy is at odds with scripture, we as Christians should be prepared to be vocal about what is right, in this case, the provision of healthcare without desire to make profit, for all. So far as is possible, the original aim of the NHS, for healthcare to be provided free at the point of delivery should continue, so that everyone, including those of limited means, have access to the care they need. Government should maintain an environment where those providing the treatment are properly remunerated for their work, feel respected and assisted in providing care to the best of their ability in a safe manner, free from unnecessary stress and with adequate time for rest and for other obligations, including time with families and study. Maintaining staff morale and improving recruitment and retention will be vital if patients are to continue to receive the best care.

The scripture above raises the question of whether we, as Christians, can support private companies operating in the healthcare sector with a view to making a profit. Nuffield Health is a private organisation with a not-for-profit status, which is is a guarantee that any operating surpluses are reinvested back into the business, for the improvement of services, rather than being removed from the organisation as dividends. This is a good example of how the private sector can operate within Christian ethical principles.

The percentage of the GDP spent on public healthcare in the UK is about 7%, which is less than at least 15 other well-developed countries. The NHS provides exceptional value for money and the model is very well regarded by other countries. It should be possible for the fifth wealthiest nation in the world to continue to maintain this service and the wellbeing of those who work in it.