Following from the discussion about God and gender earlier this week, and whether it has an implication for mission, a friend drew my attention to this post which I wrote five years ago and have not returned to. I think I might write it differently now—but it retains its relevance.

I am feeling very nervous about posting on this particular gender-related issue. I know I will get lots of flak from all corners for making gross generalisations and such. But here’s the thing: a religious movement, started by a man, with a predominance of male leaders from the beginning, and in which some groups are struggling very hard to let go of male hegemony, has, for at least 600 years (in the West at least) been dominated as a movement by the presence of women. I’m not suggesting that this is a Bad Thing, but, by any measure, it is a Big Thing. For a start, it is a real paradox. For another, it is just very odd in the context of thinking about religious movements. I don’t think any other global religious movement exhibits the same phenomenon. Hinduism, Sikhism, Buddhism, Islam are all controlled by men and appeal to men. Not so with Christian faith. So anyone interested or involved in Christian ministry, in whatever form, needs to consider it.

A basic observation about this relates to what might be called the ‘offer’ of Christian faith. From the first century and across the Roman Empire, Christian faith was very attractive to those who were oppressed and longed for hope and liberation, and so (by most estimates) had a disproportionate appeal amongst the poor and the underclass. (We can see a first hint of this in 1 Cor 1.26, though clearly the body of believers in Corinth also included the wealthy.) And there is no doubt that it is women, much more than men, who as a gender have felt in need of hope and liberation. If you don’t believe me, just listen to the last edition of Woman’s Hour from Radio 4. Men might well be in need of liberation and hope; it is just that they don’t realise it, or don’t see the relevance of the Christian ‘offer’ in the way that women appear to.

But, in the Western church, there is also a large number of other, circumstantial and cultural, issues at play. For one thing, the public profile of male Christian leaders hasn’t been exactly inspiring. Men wearing dresses, whose leaders wear daft hats that make them look dafter, and even (until fairly recently) gaiters, together contribute to identifying clergy as a kind of middle sex. It is not the kind of thing the inspires men, certainly not working men. You might want to protest that this is superficial, but in our media age impressions count. It still seems almost impossible for the media to depict bishops in anything other than pointy hats and wearing carpets. How else could you tell they were bishops? 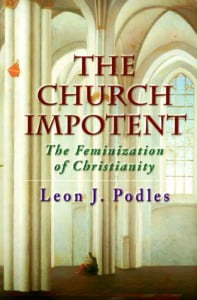 Perhaps a deeper issue behind the impression is a deep-seated aspect of Christian spirituality. Generally speaking, the Christian response to external events is to reflect and contemplate, rather than to respond and act. When I think about my dealings with the working men (in business, building, gardening and printing industries) this seems like a very difficult way of thinking for them to relate to. Allied to this is something profound in the way we construe our relation to God. Leon Podles in his fascinating The Church Impotent: the feminization of Christianity traces this back to Bernard of Clairvaux, whose bridal imagery in mysticism had a profound effect on Western spirituality.

At a more immediate level, there are numerous aspects of practical issues which make men feel less comfortable than women in your typical Western church. Men’s fat fingers don’t cope well with fiddly service books, points out my friend John Leach. Most patterns of Christian discipleship expect a level of verbal fluency at which women excel over men. Family churches are often adorned with artefacts produced by women, notes David Murrow in his popular Why Men Hate Going to Church. And the jobs on offer in most churches again are geared to things that have traditionally been the domain of women—arranging flowers, sorting rotas, looking after children and the like. One good reason for putting a new projection and sound system into your church building is that it typically creates a lot of jobs for the men in your congregation—and even some jobs for men you would like to draw in.

My reason for writing this post is the large number of animated responses to Murrow’s own blog post on men and singing in church. The move away from familiar, rhythmic, structure songs to more unpredictable, emotive and interiorising songs again appears to have a differentiated appeal to men and women, and Murrow does not think this is helpful. One of the first comments was from Mark Broomhead, who leads a fresh expression called The Order of the Black Sheep, which is aimed at those involved in heavy metal music:

We don’t have congregational sung worship at all at the moment, and have a fast growing congregation with a higher than usual proportion of men. Not to say that we will not in the future, but in a mission/seeker orientated setting it appears appropriate at the moment.

This should be titled ‘The secret that keeps US from singing in worship.’ It doesn’t answer the question why, when faced with an unknown song, do women attempt to sing and men don’t?

I think the simple answer is that, whilst men enjoy taking risks and adventure, what they do not like is risking looking foolish in front of others, and attempting to sing something you don’t know does just this.

My own view is that another major issue relates to preaching in our churches. By and large, the preaching style in most churches assumes that the congregation is happy to learn passively, by sitting and listening. As Murrow points out in his chapter on boys and faith, boys and men are much more often kinaesthetic learners—they need to be actively involved in their learning. A long, verbal monologue is often just the wrong thing for them—though this can be considerably helped by the use of images in preaching, since men remember what they see more than what they read or hear. When leading all-age services in church, I have always been struck by the response of men, and often older men—they have really engaged in the interactive, kinaesthetic style of good all-age communication, which has made me wonder why we ever do anything else!

I also wonder whether what we preach on makes a difference. I suspect men are much more engaged by preaching which has specific, practical outcomes, and perhaps therefore enjoy hearing preaching on Old Testament narratives, with their ‘action heroes.’ It might be that focussing on the conceptual complexities of Pauline theology does not suit men’s learning styles. Although conservative, ‘reformed’ churches that focus on Paul do attract men, my observation is that they are often highly educated professionals. The more earthy spirituality and preaching of the (so-called) New Churches appears to be more suited to working men.

All this touches on key questions about the shape of our theology. In his chapter on ‘Getting the Big Story Right’, Murrow contrasts the two kinds of film plot.

Men’s movies: a hero saves the world against impossible odds

Women’s movies: a woman finds a relationship with a wonderful man.

In today’s church, the gospel is no longer about saving the world against impossible odds. It’s about finding a happy relationship with a wonderful man.

If the point of going to church is to pursue a relationship, you will draw more women than men. The End. Roll credits.

Murrow’s book has the distinct disadvantage that it carries a commendation from Mark ‘muscular Jesus’ Driscoll. But he asks some important questions, and in fact is not uncritical of the megachurch agenda, even though they are clearly doing some things which attract men—including telling the story more along the ‘men’s movies’ line.

We are now moving from the ‘offer’ of Christian faith to the ‘ask.’ I have been struck that one of the central pieces of teaching in the OT, the Ten Commandments (properly, ‘The Ten Words’) does not include the command to ‘love God’ but to act in certain ways. Although the command to ‘love’ in Deut 6.5 uses a quite general word ahav for love, elsewhere (for example in Hosea 6.6) the term is the rather different hesed (from which we get the term ‘Hasidim’). This is more often translated ‘loving faithfulness’ and has much more of a sense of a gritty determination to stick with God, possibly against the odds. This kind of practical grittiness is much more evident in the language of Jesus’ teaching in Matthew than the reflective/affective understanding of ‘loving God’ that we read out of John’s gospel. I wonder what difference it would make if we understood the central demand of faith in terms of gritty determination rather than the affective, emotive sense that ‘love’ carries in our contemporary world.

I am quite sure that some of you reading this will have spent the last couple of minutes screaming to your screen ‘These generalisations are absurd! I am a man/woman and I don’t think like that!’ But these generalisations are just that—generalisations. There are certain things that appear to work well for many women, and other things that appear to work better for many men. And all the evidence points to the fact that in the West, the church is doing more of the former and not enough of the latter. The supreme irony of this is in our ‘mission aware’ context is that there is further evidence to consider: draw in women, and the men often do not come. But draw in men, and the whole family often follows.

I’ve stuck my head above the parapet. Please take careful aim before you pull your trigger!