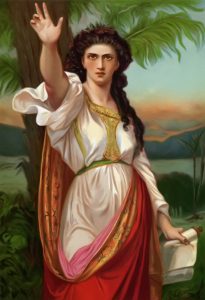 Marg Mowczko writes: At the moment, I’m preparing a message on 1 Timothy 2:12. For one of my points, I have made a list of godly Bible women who ministered to men. As I was making the list I saw something I had not noticed before: all the women, except for one,[1] are described in Scripture as being prophetesses or having a prophetic gift.

Deborah (Judges 4:1-5:31) was a prophetess and judge who led Israel. Barak, the general of the army, respected Deborah and followed her orders, and Israel prospered under her leadership. (One of the perennial arguments from people who have a problem with Deborah being the leader of Israel is that God probably only allowed her to be the leader because there were no men who were available, willing, or suitable to take the job. The fact that Deborah was a woman is not especially highlighted in the text, and there is not the slightest hint anywhere in the Bible that her gender was a problem. Rather, the Israelites recognised her authority. They came to her, whenever they wanted justice and guidance, to her seat just north of the crossroads of busy trading routes in the centre of Israel (Judges 4:5). Unlike many of the other judges, Deborah did a great job as leader and prophet.)

Huldah (2 Kings 22:14-20; 2 Chronicles 34:22-28) is another prophetess who also exercised authority in her ministry. This is what John Dickson says about her in his book Hearing her Voice [2]:

Huldah is “a particularly curious example of spiritual leadership. Not only did she deliver an authoritative message to King Josiah concerning all Judah, but she also validated the authority of the newly rediscovered “Book of the Law of the LORD”. One contemporary scholar has remarked that Huldah’s endorsement of the document “stands as the first recognizable act in the long process of canon formation.”

The size and prestige of the embassy that sought her counsel indicates something about not only the seriousness of the situation but also Huldah’s professional stature: the High Priest (Hilkiah), the father of the future governor (Ahikam), the secretary of state (Shaphan) and the king’s officer (Asaiah). Huldah’s counsel was immediately heeded, and sweeping religious reforms resulted (2 Kings 22:8-20; 23:1-25).

King Lemuel’s Mother (Proverbs 31:1ff) taught her son, a grown man and a king, an inspired message that is contained in the sayings of Proverbs 31:2-9, and possibly Proverbs 31:10ff. Her message is described in various English translations as an oracle (NASB, HSCB, ESV), an inspired utterance (NIV), a vision (WYC), a declaration (YLT), a prophecy (KJV), translated from the Hebrew word massa. Massa is used frequently for Isaiah’s prophecies (e.g., Isa. 13:1), and is used for Nahum’s, Habakkuk’s, and Malachi’s prophecies (Nah. 1:1; Hab. 1:1; Mal. 1:1). By being a part of Scripture, the sayings of this woman continue to authoritatively instruct men and women, and even kings.

Anna (Luke 2:37-38) was a prophetess who never left the Temple in Jerusalem “worshiping with fasting and prayer, night and day.” After seeing the baby Jesus she began speaking about him “to all who were waiting for the redemption (or deliverance) of Jerusalem.” Surely this “all” included men—particularly in such a public setting as the Temple—as well as women.

Philip’s Four Daughters (Acts 21:8-9) are barely mentioned in Scripture but are mentioned in significant ways by other early church writers which show that these women were well known and respected in the early church as prophets. Eusebius calls the women “mighty luminaries” and associates them with apostolic gifts, teaching, and foundational ministry. The ministry of these four women prophets should not be underestimated.

There are other women I could have added to the list, women such as Miriam who was regarded as both a prophetess and leader of Israel. Even Abigail, a courageous woman by anyone’s estimation, prophesied when she gave directives to David.[4]

I don’t know exactly what the ministries of these prophetic women looked like, but I think they did more than just deliver an inspired message from time to time. Rather, it seems that “prophetic” described who they were, and that the title “prophetess” denoted a woman with spiritual authority in her community.

What struck me in reading about these women is that there was a place for them in Israelite society—a prominent place. It seems that their community recognised their God-given authority and that women with prophetic abilities were respected, even esteemed. The Bible shows us that the ministry of these women was well received by men.

The biblical record indicates that these women prophets mostly ministered to men, and there is not the slightest hint anywhere that any man was offended by a woman prophesying to, or directing him. Barak, for example, relied on Deborah’s commands and company; Huldah’s expertise was sought out by a delegation that included the most powerful men in the country; David praised Abigail’s words and wisdom.

Furthermore, the inspired songs, prayers, praises and teachings of Miriam (Exod. 15:20-21), Deborah (Judges 5:1ff), Hannah (1 Sam. 2:1ff), Abigail (1 Sam. 25:28-31), King Lemuel’s Mother (Prov. 31:1-9), Mary (Luke 1:46ff) and Elizabeth (Luke 1:41ff) are all considered prophetic and are included in Scripture, which shows that the writers of the Bible (who were presumably all, or mostly, male) recognised the authority of  the words of these prophetic women. This is important to note, as many Christians believe Scripture has the highest level of authority.

In the Bible we see that there was a place for prophetic women leaders in Israelite and Jewish society, and in the first decades of the church within Israel. What saddens me is that in many Christian communities today there is no longer a place for women leaders. In most churches, gifted women are not even being recognised, let alone being encouraged and permitted to lead and speak. Some are even offended by the idea of women leaders. The church and the world are suffering because the prophetesses—women with God-given spiritual authority—are being silenced and sidelined.

What can you or your church do to make a place for gifted women leaders?

What can you do to encourage a woman to move beyond the side-lines?

[1] The exception is Priscilla. Priscilla is on my list of women who ministered to men but she is not referred to as a prophetess or as having a prophetic gift in the New Testament. In fact, no legitimate female Christian minister outside of Israel is called a prophetess in the New Testament. I wonder if that is to avoid making any connection between godly, Christian women and the prophetesses in the pagan, Greco-Roman world.

[4] According to the Megillah (one of the tractates of the Talmud), the rabbis regard Abigail as one of seven prophetesses who prophesied to Israel. The other six women prophets are Sarah, Miriam, Deborah, Hannah, Huldah, and Esther. (See Megillah 14a and 14b.)