The General Synod of the Church of England will again this month be discussing a proposal for the introduction of legislation to allow the appointment of women bishops. (Yes, you have to say it that carefully…). There will no doubt be much press coverage and publicity by all sides of the debate. But not many realise that there is a hidden issue obstinately preventing agreement which few understand or are aware of. It has nothing to do with how men and women relate, and nothing to do with the biblical texts on women and men.

The issue is ‘the eternal functional subordination of the Son within the Trinity.’ If that makes you think of debates about how many angels you can fit on the head of a pin, you are not alone. The argument goes like this: Scripture says that Jesus submitted to his heavenly Father; this submission was not just in his earthly life, but extends into eternity; there is therefore a hierarchical ordering of authority within the life of the Trinity, whose ‘persons’ are nevertheless ‘equal’; since humanity is made in the image of God, there is (rightly) a hierarchical ordering of authority in human relations; although equal, men and women are therefore to live in a similar hierarchical ordering, with men exercising authority over women. It is further argued that this is not only what Scripture says, but what all the ‘orthodox’ theologians have believed down the centuries. For this reason, the debate about women as bishops is not just a question of the ordering of the church but about the very nature of God, and therefore not ‘secondary’ but ‘primary.’

As you might imagine, this is rather controversial. Some contemporary critics have gone as far as to say that this is a revival of Arian heresy, suggesting that the Son is a lesser divinity than the Father, since the two are not ‘equal in power.’ But once one side has called the other heretical…well, you can see where this is going.

To get up to speed with this debate, over the weekend I read The New Evangelical Subordinationism? It is a collection of representative essays from a range of different views in this debate, so the essays often talk past each other, rather than engaging with each other. (This debate is currently raging amongst conservative evangelicals in US and Australia, so if that does not include you, you might well not have come across this discussion—and you might be quite pleased about that!)

The debate appears to centre around a small number of related issues. Does Scripture really suggest this? What is the relation between Jesus’ attitude to God in the gospels, and what we can say about the nature of the Trinity? What is the relation between the ‘economic’ Trinity (how we see God as Father, Son and Spirit at work), the ‘immanent’ Trinity (Father, Son and Spirit as they really are, so to speak) and the ‘social’ Trinity (how the ‘persons’ of the Trinity relate to one another)? And is there a connection between the relations within the Trinity and relations between people? 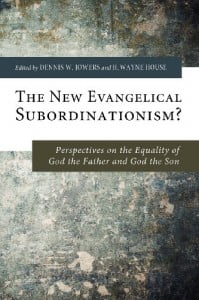 Reading the essays left me with a number of different thoughts:

1. Although in the past people have believed in a hierarchical ordering of society, and although there is consistent language of ‘order’ in the Trinity within the Church Fathers, the two have not been connected until recently. Kevin Giles suggests that the first person to make such a connection was George Knight III in 1977. Ironically, others have been make a connection between the Trinity and human relations elsewhere—but in exactly the opposite direction! Theologians such as Moltmann and Zizioulas have been arguing for a radical egalitarianism between humans on the basis of their theology of the ‘social Trinity’ which focusses on the equality amongst Father, Son and Spirit within the godhead.

2. Throughout the book, there seems to be a lot of mutual misunderstanding arising from a trading of terms. So one commentator critiques the writing of another, who has equated the terms ‘authority’ and ‘power’. These are not the same (he says) so it is possible for persons of the Trinity to be equal in power but not equal in authority—even though he has just cited a definition of ‘authority’ which includes ‘The power to…”

Similarly, there seems to be an unresolved difference of view about what St Augustine meant by ‘order’ within the Trinity. According to one view, this means (in effect) a hierarchy; but to others, this is just not presence in Augustine’s writing. The debate won’t move on without these issues being resolved, or at least clarified.

3. One of the things that struck me most forcibly is the differences in style and theological approach amongst the essays. Some read as rounded theological reflections, considering the data; others list a series of texts and offer individual comment on them. This is not just a debate about what Scripture says; it is a much more fundamental clash between different styles or cultures of theological approach.

4. But at certain moments in the debate, there do appear to be what I can only describe as points of genuine illogic. How can the Son be eternally ‘functionally’ subordinate to the Father, and for this authority structure to be ‘essential to their being’, and yet this is not a hierarchy of being but only of ‘function’? This does not make sense to me, just on the level of logic. How can one ‘person’ of the Trinity exercise authority over another, if they both have one will, being part of a unified godhead? This seems to me to be a contradiction. If a functional hierarchy of men and women is based on an eternal functional subordination of the Son to the Father, surely the male-female hierarchy must also be eternal? None of those arguing for such a hierarchy believe it is eternal—but why not?

5. In the end, I believe that this whole discussion is based on a big mistake. Jesus prays in John 17 that his followers ‘may be one, even as you and I [Father and Son] are one. But in every other example I can think of, we are instructed to base human relations not on relations within the godhead, but on the relation between God and humanity. ‘Love one another as I have loved you.’ ‘The love of God has been poured into our heart by the Holy Spirit.’ When Paul says ‘Imitate me as I imitate Christ’ he is not referring to Christ’s relationships within the godhead, but to his ministry and attitude to others, including Paul himself. The Trinity does not tell us how to relate to one another—but God’s relating to us does!  So any use of the ‘social Trinity’, in either a hierarchical or egalitarian direction, is seriously mistaken.

But there are two other lasting impressions I had from the book. The first is to recognise that  Christian faith is about believing in the Trinity, and not believing in a particular doctrine about the Trinity. This is the nub of the wider theological debate—we trust in God, not in doctrines about God.

Secondly, on the specific issue at hand, the conflicting views on subordinationism will not be resolved soon, and not in the next few weeks—if ever. This in turn means that, as long as this is an issue, the debate in the Church of England about women as bishops will not be resolved—no satisfactory compromise position is possible.

The debate in Synod will need to take serious account of when it makes its decision this month.