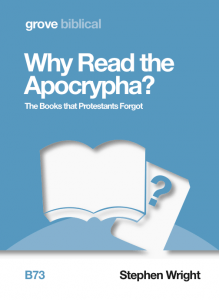 The latest Grove Biblical booklet is a fascinating study of the Apocrypha by Stephen Wright of Spurgeon’s College in London, which makes a powerful case for why Christians ought to read it and be familiar with its contents.

The booklet starts in an intriguing way:

Where in the Bible will you find the story of a man who lost his sight because of sparrow-droppings and regained it through the application of fish-gall? Or of another who gave his life for his people by stabbing an elephant from beneath?

In some Bibles, you will not find them. That is because they occur in the Apocrypha, that rather mysterious collection of books that is bound into the middle of some editions, but left out of many more. As a child growing up in a household that possessed a number of Bibles, I remember being intrigued by the fact that some contained more books than others.

Stephen explores the historical reasons why these books are omitted from most Protestant Bibles, and then looks at what is actually in the Apocrypha. He then addresses crucial questions of the key themes of the apocryphal texts, and how they relate to the rest of the canon of Scripture, finding points of both continuity and difference.

The most significant theological issue occurs in the exploration of wrath and judgement, and how we understand New Testament language about Jesus ‘dying for the people’ (John 11.50) as a ‘sacrifice of atonement’ (Romans 3.25). After outlining the use of judgement language in 1–4 Maccabees, Stephen offers this exposition (pp 20–21):

What is notable in all these passages is that wrath, or punishment, whether or not it is specifically ascribed to God, is not conceived just as an attitude in God’s mind, but as concrete terror, pain and national trauma. The sacrifice of the martyrs, similarly, is seen as achieving not an unseen change of mind in God, but the actual amelioration of suffering and reversal of fortunes. That then becomes a sign of the mercy of God and the disciplinary potential of the suffering.

All this, together with the martyrs’ hope of resurrection, sheds light on how early Christians and perhaps Jesus himself understood his death (2 Maccabees 7.9, 11, 14). The martyr-theology is one strand of development of the ‘suffering servant’ concept from Isaiah 50 and 53. Jesus grows up among his suffering people and is willing to face the most excruciating torture and death for their sake. This will result not in a merely abstract transaction between God and them, but in a fundamental turning-point in their fortunes. Their sufferings, past, present and future, notwithstanding the extent to which they brought them on themselves, can henceforth be interpreted as disciplinary rather than condemnatory.

This background is especially instructive for understanding Paul’s thinking in Romans. Most striking is that the word translated ‘sacrifice of atonement’ in Rom 3.25, hilast?rion, appears also in 4 Maccabees 17.22: ‘And through the blood of those devout ones and their death as an atoning sacrifice, divine providence preserved Israel that previously had been mistreated. What then might Paul mean when he says that God set forth Jesus as a ‘sacrifice of atonement’ (Rom 3.25)?

There has been intense debate over whether this word denotes ‘propitiation’ (appeasing God’s wrath) or ‘expiation’ (cleansing). My hunch is that since Paul has explicitly discussed the wrath of God in Rom 1.18–32, and was surely aware of the theme of wrath and atonement in the Maccabean literature, he has ‘propitiation’ in mind here, but in a sense that is coloured by the Maccabean narratives. He can be read as hinting that Jesus, through his courageous obedience even to death as a sacrifice of atonement, was fulfilling the pattern of which the Maccabean martyrs were but a pale foreshadowing.

In this light, Paul is not saying Jesus was being punished by God, but courageously bearing the extremities of wrath, understood as the brutal outworking of the powers of evil crushing his people and all people. This wrath-bearing, as in the case of the Maccabees but far more so, was a cathartic and liberating historical force, not merely either a good example or an inward change in God or humans. All this is indeed held within the sovereignty of God, who ‘set him forth’ as this ‘sacrifice of atonement,’ but who—as the Apocryphal writers’ theological struggling attests—was not to be held responsible for the torments of evil themselves.

This background is not the only or even the most important for the NT understanding of Jesus’ death. In Romans, for example, the allusions to the exodus (for example the word ‘redemption,’ 3.24) are more pervasive and obvious. But it is good to note this network of ideas about martyrdom precisely because it is neglected.

Jesus’ achievement, of course, was far greater than that of the Maccabean martyrs. His non-violent way of life contrasted sharply with their violent resistance, and that is why the proclamation of his resurrection, after being led like a lamb to a shameful slaughter, was so startling and such a twist in the story of God and his people. The liberation he ushered in was indeed inward and transformative of the whole person, as well as outward and historical. And he enabled not just Jewish people, but believers from all nations, to understand their suffering as disciplinary, not punitive, and never able to negate the truth of God’s love (Rom 8.18–39).

It is a really readable booklet, well worth getting hold of. You can order post-free from the Grove Books website.

3 thoughts on “(Why) should we read the Apocrypha?”