Slaves, accept the authority of your masters with all deference, not only those who are kind and gentle but also those who are harsh. (1 Pet 2.18)

These references help us see just how common slavery was in the world of the earliest Christians. The Roman Empire was a slave society. According to Gaius, a second-century Roman lawyer, ‘The principal distinction made by the law of nature is this, that all human beings are either free people or slaves’ (Institutes 1.9). ‘Slave,’ ‘freed slave’ and ‘freeborn’ were fundamental categories of identity. A person’s status determined their legal rights (or lack of rights), their ability to protect their own bodies against abuse and their capacity for social honour.

Although slavery was pervasive in the world of the New Testament, it is often invisible to us. When a story or letter does not identify a person as ‘slave’ or ‘free,’ we do not ask about their status, or how that status affected their daily life. Therefore, we do not wonder what the gospel message meant for slaves, freed slaves and slave owners. For instance, how did the earliest Christians experience the unity of slaves and free people in Christ? How did they understand the exhortations for Christians to humble themselves and serve (or ‘be enslaved to’) each other? What did freedom in Christ mean for Christians who were enslaved to human owners?

Caryn sets out the social reality of slavery in the Empire, and then gives a whole chapter to exploring the experience of slavery.

Some slaves in the Roman Empire were born into slavery, but freeborn people also became slaves through capture in war or less legal means. The experience of slavery was very different for people who were born and raised to be slaves and those who became enslaved later in their lives.

Rome’s wars brought many new slaves into the Empire, as Jesus warned in Luke 21.24. Josephus, a Jewish historian who wrote about the Jewish revolt against Rome in the first century, claimed that the Roman army captured 97,000 slaves in Galilee and Judea—so many that the slave market was glutted (Jewish War 6.384, 420).

For people who had been free before their capture, the loss of rights over their own bodies added to the trauma of war. The same would be true for people kidnapped by pirates or brigands in deserted places around the Empire. The fall from the honour of freedom into the humiliation of slavery was so distressing that, in many stories, the newly enslaved committed suicide. This is the reason Josephus gave for the mass suicide at Masada on the eve of the Roman victory over the Jews there (Jewish War 7.380–387)…

In very wealthy homes, some young child slaves became objects of affection to their owners, pampered and played with (sometimes in disturbingly sexualized ways). Most child slaves did not have what we would consider a childhood. Rather, they began work as soon as their bodies were capable of simple tasks. The first-century writer Columella commented that slaves on agricultural estates were ‘hardened to farm work from infancy’ (On Agriculture 1.8.2), and contracts for apprenticeships to weavers and other skilled workers record young ages for slaves…

Slaves who were part of the same household lived, worked and relaxed together. In funerary inscriptions, slaves referred to each other as family members and friends. Funerary inscriptions also indicate enduring relationships between slaves and slave owners.

We see such relationships in Acts. Rhoda, a slave, knew Peter well enough to recognize him immediately when he unexpectedly came to the door. She was one of a few members of the church in Jerusalem to be recorded by name (Acts 12.12–15). Two slaves and a soldier escorted Peter to Cornelius’s house and, therefore, these slaves were instrumental in the preaching of the gospel to Gentiles (Acts 10.7–8). When the head of the household like Cornelius or Lydia became a Christian, all the members of the household—a group which included slaves—were baptized (Acts 10.44–48; 16.15, 33).

While slaves were part of their owners’ households, under Roman law they could not legally marry. However, slaves might form relationships akin to marriage with each other and have children together. In the parable in Matt 18.24–25, a slave had a wife and children. But the owner’s actions indicated that he owned his slave’s wife and children. Owners permitted or forbade their slaves’ relationships. Owners also arranged or enforced relationships in order to encourage procreation and additions to the numbers of slaves in a household.

Being in a slave marriage did not protect a slave’s body from others. Slaves had no right to refuse their owners’ sexual advances. Seneca the Elder claimed that unchastity was a necessity for slaves (Controversies 4, preface 10), and Plutarch said that husbands honoured their wives by using slaves for sex (Marriage Advice 16). Numerous stories, letters, and poetry from the Roman world indicate the expectation of the sexual availability of male and female slaves of all ages, both within private households and as public prostitutes, to their (male) owners.

Come and join us for the Third Festival of Theology on Tuesday 8th October!

Caryn then turns to the vexed question of what the New Testament writers thought about slavery ethically, and why they did not explicitly advocate manumission (freedom for slaves). She considers Paul’s instructions in 1 Corinthians, and the particular case of Onesimus and Philemon, before making more general observations.

It may be surprising to readers today that New Testament authors did not ask slave owners to free their slaves (an issue addressed in the next chapter). There are, nonetheless, some important differences from the Greco-Roman household codes. First, unlike the Greco-Roman examples, the New Testament texts directly addressed the slaves themselves. The direct address gave the slaves their own agency, making them—and not their owners—responsible for their own behaviour. Secondly, in Eph 6.9 and Col 4.1, Paul commanded slave owners not to threaten their slaves, but rather treat them with ‘justice and equality.’ Like the instructions given to husbands and fathers in Eph 5.25–33 and 6.4 and Col 3.19 and 21, the instructions to slave owners limited their power over vulnerable members of their households. Thirdly, Paul reminded slaves that their true owner is God—and slave owners are also owned by God. In these ways, the New Testament household codes challenged Greco-Roman social norms…

Slavery was fundamental to life in the Roman Empire. Perhaps because of this, there is no command in the New Testament for Christian slave owners to free their slaves. Instead, Paul and Peter instructed Christian slaves to be good slaves, obeying their human owners as if they were obeying God (Eph 6.5–8; 1 Pet 2.18–21).

The New Testament household codes, among other texts, were used by supporters of slavery in the Americas to counter the abolitionist movement. Slave owners argued that slavery was a natural part of the social order of the world. They also claimed that the enslavement of Africans and indigenous peoples was for their own good. According to white slave owners, races they saw as inferior would become civilized through slavery.

Opponents of slavery also drew on biblical evidence. They pointed to the refrain that repeats through the Old Testament: God saved Israel from slavery (Exod 20.2; Ps 81.10; Jer 34.13). Paul proclaimed that in Christ, there was no slave or free (1 Cor 12.13; Gal 3.27–28; Col 3.11). For Christian slaves and abolitionists, texts like these demanded the abolition of slavery.

New Testament authors did not demand the end of slavery as a social and economic system. However, they did critique the core assumptions of Roman slavery: the dehumanizing of people made in God’s image; abusiveness as a matter of course; and the very idea of ownership over human lives. As in Rev 18.11–13, slavery and the slave trade brought divine judgment on the Roman Empire. The message of mutual submission is fundamental to discipleship in the New Testament.

For you were called to freedom, brothers and sisters; only do not use your freedom as an opportunity for self-indulgence, but through love become slaves to one another. (Gal 5.13)

We should not overlook how radical this message would have sounded in the early church, in the midst of Rome’s slave society. Even if the New Testament authors did not proclaim the end of slavery, their redefinition of freedom and slavery challenged the fundamental social values of their day.

How might these messages sound today? The New Testament asks us to question our own structures of power and status. Even if we consider slavery to be illegal, are there ways we nonetheless fail to recognize the basic humanity of the people around us? Are there ways that Christian leaders could do better at giving up their power and privilege for the sake of their congregations? If we listen carefully, the subtle challenges to the Roman system of slavery in the New Testament encourage those with power and privilege to give up their privileges for the sake of the less privileged.

Finally, Caryn turns to the question of the meaning of slavery metaphors and images in the New Testament.

The metaphor of slavery and freedom runs through Rom 5–8. The Christians in Rome lived at the centre of the imperial slave society. Roman Italy had the highest percentage of slaves of any region of the Empire. Paul’s metaphors in his letter to the Roman churches used the reality they knew to teach a powerful lesson about sin, death, grace and life…

Freedom from sin did not mean Christians had no owner. In Christ, they were slaves to God, obedient to righteousness, and rewarded with life (Rom 6.13–23). For an audience in the heart of the Roman Empire, the metaphors of slavery and freedom, death and life, would resonate with slaves and slave owners alike. But as in the mutual enslavement of Christians to each other, the call to be slaves to God reminded slave owners that they also were owned. As Paul said in 1 Cor 6.19–20, no one belonged to themself. Christians were purchased by God, and like slaves they should live for God. 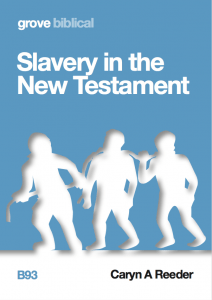 This is an invaluable study, providing essential information about the context of slavery in the first century as we read both literal and metaphorical language of slavery. It highlights how prominent this language is in the New Testament, and the theological freight that it carries, and offers vital background for any ethical discussion of slavery and the Bible.

You can order the booklet post free for £3.95 in the UK from the Grove website, or buy it as a PDF e-booklet.

20 thoughts on “What was slavery like in the NT world?”