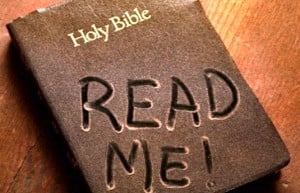 A notable feature of a number of contemporary debates in the church is the lack of well-informed use of Scripture. It’s not unusual to hear one party or other either trot out a proof text, or write Scripture off on the basis of such proof texts—or hear views expressed which demonstrate basic lack of familiarity with the biblical witness. This phenomenon appears to be accelerating with the current debates in the C of E about sexuality.

In part this comes down the reduction and diffusion of engagement with Scripture, starting with their training, on the part of leaders in the church—and this will get worse as initial training includes less and less focus on knowledge of the Bible. But it is also the result of a decline in the study of Scripture, perhaps in small groups, within congregations. For some churches, there has simply been a loss of interest. For others, Bible study groups are seen as inward-looking and dull, and are displaced by ‘missional’ activity or a focus on experience.

But the most obvious sign of this change is the loss of reading Scripture as part of public worship. I am constantly amazed at the paltry amount of Scripture actually read in evangelical churches—when ‘middle of the road’ Anglican churches will hear five or more passages in the course of a liturgical service. Now, simply hearing Scripture read is no guarantee that we understand it, still less that we live it out. But it seems to me that hearing Scripture read is a necessary pre-requisite to the other two. And doing this together, in public worship, engages the breadth of responses and perspectives not present in other contexts. I suspect that, for most churches, this has become a greater challenge for online services; I would be surprised if any church has continued with same engagement they had with the live reading of Scripture.

This raises a real practical challenge, one we are reluctant to admit to: for most people, listening to endless Bible passages read is so boring!

I was confronted with this several years ago when leading the all-age part of a Sunday service. (We always had the first 20 minutes with all ages together, so we could praise, confess, pray, read Scripture and learn from it all together before doing this in separate groups.) The reading set was Matt 25.31–46, the parable of the sheep and the goats. The passage fills one column in English translations, and my immediate reaction was ‘Oh my goodness—it is so long! How on earth will I keep the attention of the children?’ (Children show you if they are bored; adults just sit their politely waiting to the end to tell each other how bored they were.)

Then it struck me:

Did anyone ever complain that Jesus’ teaching was boring?

In fact, did anyone who listened to the gospels or letters when they were first being read ever think that they were boring? Difficult to understand, perhaps (2 Peter 3.16); but boring—never! What have we done to the reading of Scripture to make it so dull?

So I decided to do what Jesus did—to simple teach, to ‘perform’ the passage. I set aside an hour and a half on the Saturday evening to learn the passage, and on the Sunday morning simply removed my collar, rolled up my sleeves, and without any announcement, started: ‘When the Son of Man comes in his glory, and his angels with him…’ I learnt four important things:

There are some good reasons to think that performance of texts was a key part of the practice of the early Christian communities.

We have the odd clue in the texts themselves. So Rev 1.3 includes a blessing for the lector (singular), the person reading aloud to the assembly, as well as to those who hear the lector’s reading. We know that letters would have had designated letter carriers (such as Pheobe in Romans 16.1), and there is some debate about whether this person would also be the lector, or whether this would be a local member of the congregation.

Secondly, the social context also supports this. Although many New Testament documents were written for further study (witness the careful structure in Luke, Acts and Revelation which would not be evident on hearing), in the first instance they would have been read out loud, not least because literacy would not have been uniformly high, and because copying manuscripts was a relatively expensive business. (Are the ‘attendants of the word’ in Luke 1.2 those who looked after the communities’ documents, including the first copies of the gospels?)

Thirdly, some NT texts are evidently written for oral performance. Hebrew is perhaps the best example of this, but the letter of James, with the links between different sections based on word plays rather than logical progression, is another possible example. (The qualities of wisdom in James 3.17 are linked by alliteration, the first group starting with epsilon, and the second with alpha—something that is lost in translation.) And of course the gospels record Jesus’ teaching which was first offered as performance. Even where the gospels diverge on other details, they tend to converge when recording Jesus’ own words, suggesting that we are hearing what was said, even if in translation.

Fourthly, some scholars (such as Tom Thatcher) are arguing that we should understand that the gospels were widely performed prior to being written in a final form, which might explain some of the differences between early manuscripts. We might again find some hints of this in the text, such as John 4.6, where Jesus sits down at the well ‘in this way’ (omitted in most English translations)—though this interpretation is contested.

In their fascinating Grove booklet on Performing Scripture, David Seal and Michael Partridge note the importance of performance for Scripture as ancient literature:

A public reading of a text is likely to have involved some level of practice as opposed to a speaker delivering their speech, message or story impromptu. In ancient Hebrew writing, only the consonants of a text were inscribed, and the vowels were supplied by a uent reader. Greek writing also presented difficulties for the unprepared reader. Vocalization of ancient Greek texts required navigating through a river of letters since texts were written without any punctuation or gaps between words but were just a continuous sequence of capital letters. Thus, a speaker would need to be well acquainted with the work prior to reciting it before an audience, while dedicating some time to regular practice. To read aloud in public is likely to have required a much higher degree of comprehension by the reader than it does today.

It was from this kind of oral/aural environment that the Old and New Testament documents emerged. They were composed with their aural and oral potential in mind, and they were meant to be orally delivered or performed when they arrived at their destinations (see the mention of the lector in Rev 1.3). People understood the full meaning of a written text by experiencing it being performed. An ancient Israelite or a member of the early church would not only hear the words spoken, but they could also experience the characteristics of the speaker’s voice such as modulation, tone and volume. All these vocal features helped to convey the written or memorized message. There was also a visual component in the delivery of the text. The speaker’s facial expressions, body movement and gestures also enhanced and contributed to the words spoken. Thus, oral literature does not fully come to life until it is performed, using the appropriate and intended vocal variation and physical expression.

Fifth, in many ways the proof of the pudding is in the performing. When teaching John’s gospel, I used to take John 9, print it as a script, and get different readers to simply act it out in class, unrehearsed. It works perfectly! And the performance, with characters moving on and off stage, demonstrates its careful chiastic structuring. Watch this performance Hebrews 9 and 10 by Ryan Ferguson:

We watched this recently in our church ‘small group’ (which has grown to 16 during lockdown—much more manageable on Zoom!) and found it compelling, not least in the light of the evidence of ancient letter writing set out in the Bible Project video on how to read the NT letters in their literary form.

And some years ago the actor Alec McCowen filled a West End theatre with his performance of Mark’s gospel in the Authorised Version (which I remember watching on television one Christmas day afternoon as a teenager).

When in 1978 he gave his first public performance of ”St. Mark’s Gospel” for a nervous management in the northern city of Newcastle, there was definitive proof of the Gospel’s power to arrest and intrigue. The key moment came when a little old lady seized him after he had finished one evening and said with open astonishment what critics and audiences were soon to be repeating all over England and America: ”It was as good as a play.”

So, what can we do to make the reading of Scripture more engaging? Four things:

27 thoughts on “What happens when Scripture is performed?”