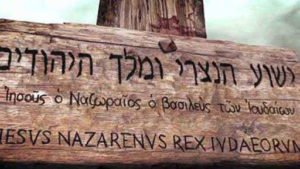 This Sunday was traditionally known in the Church of England as ‘Stir-up Sunday‘, a phrase derived from the BCP Collect for the last Sunday before Advent, which in turn inspired the making of Christmas pudding (which needs plenty of stirring):

Stir up, we beseech thee, O Lord,
the wills of thy faithful people;
that they, plenteously bringing forth the fruit of good works,
may of thee be plenteously rewarded;
through Jesus Christ our Lord. Amen

In 1925, Pope Pius XI added the festival of Christ the King on the last Sunday before Advent, and this came to be included in the Church of England lectionary. His intention was to encourage the whole people of God to consider the importance of obedience to Christ:

The Church of England collect hints at that, and pushes the ‘stir up’ collect to become a post-Communion prayer.

Eternal Father,
whose Son Jesus Christ ascended to the throne of heaven
that he might rule over all things as Lord and King:
keep the Church in the unity of the Spirit
and in the bond of peace,
and bring the whole created order to worship at his feet.

The lectionary readings for years A, B and C cycle through Matthew, John (rather than Mark) and Luke, so our reading on Sunday is Luke 23.33–44.

The immediately preceding verse, Luke 23.32, really belongs to this narrative; although some translations imply that it completes the previous episode, the phrasing (with the Greek δὲ) actually implies that it starts a new section, and the mention of the ‘criminals’ or evil-doers in v 33 doesn’t make much sense without their introduction in v 32. So it is worth (once more) considering revising the lectionary provision.

It is also worth noting what has just happened before this passage. Matthew, Mark and Luke all note that Simon of Cyrene is compelled to carry the crossbeam for Jesus some of the way, though John omits this, emphasising Jesus’ own role (just as John omits mention of the others crucified with Jesus). But Luke alone adds the exchange with the women of Jerusalem, where Jesus warns of the coming judgement on the city, a judgement he has already mentioned in Luke 19.43–44, postponed from his reading of Is 61 in Luke 4 but soon to come now that his earthly ministry is nearing its end. (The judgement is expressed in a quotation from Hos 10.8, and in Rev 6.16 the same cry is uttered by all those who face the ‘wrath of the lamb’.)

Our passage falls into two halves: the first half (up to v 38) closely parallels Matt 27.33–44 and Mark 15.22–32, though with some elements mentioned in a slightly different order; but the second half, the exchange with the two criminals from v 39, is unique to Luke.

The other gospels give the Hebrew name of the sight of the crucifixion, ‘Golgotha’, whilst Luke alone omits this, just offering the translation ‘the place called The Skull’. This again confirms he has non-Jewish readers in mind, but it also adds starker note to the narrative. Like Matthew and Mark, Luke mentions the criminals are crucified on either side of him, putting him in the middle of the scene.

Jesus’ call to God for forgiveness for those who are treating him in this way ‘Father, forgive them…!’ is neither in the other gospels nor in the earliest manuscripts of Luke, so is omitted in some English translations. The most plausible explanation is that this is an agraphon, a saying of Jesus that was not originally in the gospel accounts, but was so striking and memorable that is was known and circulated; Acts 20.35 provides us with another agraphon included by Paul in his speech. The saying fits naturally here in Luke, partly because of the themes of forgiveness throughout the gospel (see Luke 4.18, 5.23–24, 6.27–28, 7.47, 11.4, 17.3), and partly because it forms the background to Peter’s comment that those who killed Jesus ‘acted in ignorance’ (Acts 3.17).

This section is packed with fulfilments of ‘messianic’ Old Testament scriptures:

The language of the ‘rulers’, questioning whether he is the ‘Christ of God’, provides the Jewish equivalent to the Roman title of ‘King of the Jews’. The title of ‘Chosen One’ comes from Is 42.1 and the ‘servant songs’ in that section of the prophet. There is a deep irony in the actions of Jesus’ executioners unwittingly fulfilling the messianic texts, and in doing so demonstrating that Jesus is who he claimed to be and that their rejection of him was mistaken—the very actions of their rejection confirm both who he is and how wrong they are.

Luke omits the taunting related to the temple saying mentioned in Matt 27.40 and Mark 15.29 (see also Mark 14.58)—though it is interesting to note that John 2.20 alone provides the necessary background to this, demonstrating the inter-dependence of the gospel accounts.

All four gospels note the inscription, with John 19.19 giving the fullest account of it, including noting that it was written in the three main languages of the region, Latin, Greek and Hebrew. (The illustration above has doctored the Hebrew version, writing it as ‘Jesus the Nazarite, and king of the Jews’ instead of ‘the king…’, thus allowing the initial letters to spell out YHWH, which they won’t in fact have done.)

Tradition has it that the criminal who recognised Jesus was on his right side, so on crucifixes Jesus is often depicted as inclining his head to his right—but Luke does not comment on this. The criminal recognises both his own guilt and Jesus’ innocence; this reflects the themes in Luke both that it is often those on the margins and the unexpected characters who offer the greatest insight, but also that Jesus calls those very same people to repentance, as he does to all. The penitent’s use of his name, Jesus, recalls the beginning of the gospel when Gabriel explains to Mary that he will be called by this name (Luke 1.31), meaning ‘God saves’. The petition to ‘remember’ him is a common form of prayer in the Old Testament—Hannah (1 Sam 1.11), Nehemiah (Neh 5.19), Job (Job 14.13), the psalmist (Ps 25.7) and Jeremiah (Jer 15.15) all similarly cried out to God ‘Remember me!’

Jesus’ promise in response sits in some tension with the main metaphor for death elsewhere in the NT, that those who die in faith ‘sleep’ in death awaiting bodily resurrection when Jesus returns as king and judge (1 Thess 4.13, 1 Cor 15.51) rather than immediately being in the conscious presence of God. The language of ‘paradise’ would have made sense to a non-Jewish audience, but it was also used by Jews to refer either to an intermediate state in the presence of God as well as to our final destiny in a renewed heaven and earth. Jesus’ reassurance that the penitent would experience this ‘Today’ emphasises the immediacy and effect of restoration that Jesus offers, and parallels the ‘Today’ of salvation for Zacchaeus (Luke 19.9). (It is worth remembering that, for those who fall asleep, the moment of waking appears to follow immediately from the moment when they fell asleep.)

Jesus the king faces opposition from those who belong to another kingdom, right to the end. The wording of the mocking in Luke echoes the testing by the Tempter in the wilderness:

And in this clash of kingdoms, and the clash of loyalties they command, it is worth noting how the responses of different groups vary. The leaders of the people offer the fiercest rejection and mocking; then the soldiers; then the criminals crucified with him, with their mixed reactions; and finally the crowd, who in Luke’s account appear to be neutral or undecided, simply ‘looking on’ (Luke 23.35). This opens the possibility of the repentance of some that we see in Acts 2.

And yet in all this, Jesus retains his status and authority as king. His kingship is not demonstrated in his saving himself, but in him saving others—not in an exercise of power, but in acts of service. Despite the mockery and humiliation, he appears to remain confident that this is all within the purposes of God, as he has done since he set out resolutely for Jerusalem in Luke 9.51. Even on the cross Jesus addresses God as his Father; even on the cross he promises forgiveness; even on the cross he holds on to the hope of Paradise and offers this hope to others.

This is our king.

8 thoughts on “What does Luke 23 tell us about Christ the king?”