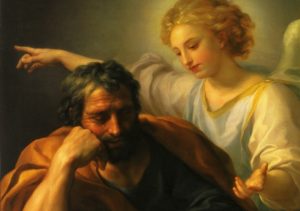 This Sunday’s lectionary reading for Advent 4 in Year A is Matt 1.18–25. It is a short reading, but laden with significance as Matthew gives his distinctive account of Jesus’ origins.

One of the presenting issues in engaging in the two narratives of Jesus’ birth in Luke and Matthew is their very distinctive perspectives, leading to the question of whether they are compatible—and therefore whether they are ‘history’ or ‘myth’. But it is worth noting that, although the two accounts have almost zero overlap in wording or concerns, they nevertheless agree about the main elements of the story:

That is a good deal of agreement! Beyond this main storyline, the accounts simply do not overlap, with Luke focussing on the experiences of Mary and the events seen through her eyes, whilst Matthew focuses on Joseph and the other male actors in the drama. (The main apparent discrepancy is Luke’s depiction of the story beginning in Nazareth, with Matthew offering no awareness that this was Mary’s home in Matt 2.22–23).

There are two important clues in Matthew’s wording which point to his concern in this passage, and they are mostly smoothed over by English translations.

First, all ETs introduce this pericope as about ‘the birth’ of Jesus and how it came about. But Matthew, unlike Luke, offers no account of Jesus’ birth or its situation, and passes right over it; his concern is about Jesus’ descent and Joseph’s role in that. This is confirmed by the word that Matthew uses here—genesis γένεσις rather than the usual term for ‘birth’ which is gennesis γεννησις—which is the same word he used in Matt 1.1, there most often translated ‘genealogy’ or ‘generations’. Matthew is in both passages concerned with Jesus’ origins, and in both his concern is demonstrating the Davidic line, made clear in the numerology of arranging the genealogy in generations of 14, corresponding to the gematria value of the name of David in Hebrew.

Secondly, and supporting this, whilst most ETs refer to ‘the birth of [the] Jesus Christ’, there is significant manuscript variation, with some manuscripts having ‘the Christ Jesus’ and others ‘the Christ’. This last is most likely correct, in part because nowhere else in the NT is the definite article used with ‘Jesus Christ’.

So Matthew is not interested so much in the birth of Jesus, but in the origins of the Christ, the anointed Davidic king. The genealogy left us with a problem, since the line of David stops with Joseph, and Matt 1.16 breaks the previous formula because Joseph was not Jesus’ natural father. The verses which form our Sunday reading address this problem by showing us how Joseph adopted Jesus as his own—against his instinct and initial judgement—so that Jesus officially becomes the ‘son of David’.

Understanding the situation of Joseph and Mary requires some knowledge of first century custom. Common practice was for a girl (usually aged around 14 or 15) to be formally betrothed to man a year prior to their marriage. But this was much more formal than modern-day engagement, and much stricter; it involved a public ceremony, and required divorce if the marriage were not to proceed. But it was also a time of abstinence, and the criteria for adultery applied if there was any question of sexual relations with others during this period. Matthew uses both the standard terms for ‘betrothal’ and ‘divorce’, (as well as the euphemistic term for sexual union in marriage, ‘come together’) though the two do not really sit together well in our context.

It is sometimes thought that Joseph being dikaios, just, righteous, fair or good, runs in parallel with his not wanting to make Mary a public spectacle (the same word for ‘shame’ is used by Paul in Col 2.15 where Jesus’ crucifixion made a ‘public spectacle’ of the powers of darkness). But in Matthew, the dikaio- word group is related to obedience to the law, shown in his sevenfold repetition of ‘righteousness’ (dikaiosune). So we should read this as Joseph both being an obedient, observant Jew—but also being a man of compassion and care.

The NIV translates Joseph’s thoughts in Matt 1.20 better than the ESV: the tense of the verb ‘contemplate’ (aorist) implies that Joseph’s mind was made up; he has his dream after he had considered this, not while he was still wondering about it. But behold! suddenly an angel appears to him in a dream. It is interesting that Joseph, unlike Mary, does not experience a real-life visitation of an angel—but this isn’t any mythological construction based on the OT stories, even of Joseph the patriarch, since the patriarch doesn’t have angels appear in his dreams. The importance of the Davidic line is emphasised in the angel’s term of address to Joseph: ‘son of David’.

For us and for our salvation he came down from heaven,
was incarnate from the Holy Spirit and the Virgin Mary
and was made man.

The name ‘Jesus’ means ‘Yahweh is salvation’. But the angel’s interpretation has important Christological implications: the natural inference from the name would be that, through this person, God will save his people, but the angel is unequivocal that Jesus himself will ‘save his people from their sins’. Salvation here is from sin, not from oppressive political powers; Israel is now Jesus’ people as much as God’s people; and Jesus himself makes God’s salvation a reality.

Matthew, like the other NT writers, has a high view of Scripture; what is written in the Old Testament is nothing less that what ‘the Lord’ (Yahweh, the God of Israel) has declared. This unusual and solemn phrase is used only by Matthew in the NT, and in every instance introduces a citation of the OT. Formally speaking, Matthew’s commentary here interrupts his narrative of what has happened, but it is striking that the language of the quotation from Isaiah matches closely the language the angel has used, that the virgin, Mary, has conceived and will give birth to a son, who will be named.

Matthew’s language of ‘fulfilment‘ doesn’t appear to assume that the texts he cites are messianic, or pointing forward to some future reality. For many of them, they are instances in the story of Israel which make sense on their own terms within the story. But the story of Jesus, and particularly of his origins, follows the same pattern of the story of Israel, and so fills it out and brings it to its completion. In the case of Isaiah 7.14, a political and military threat looks about to overwhelm the people; the promise of God’s deliverance is that, in the lifetime of someone not yet born, God will bring deliverance and the people will know that God is with them. Although the Hebrew of Is 7.14 does not use the technical term for ‘virgin’ b’tula, neither does it use the normal word for ‘woman’ or ‘wife’, which we might have expected. Instead, the unusual term ‘alma for ‘young woman’ is used, someone sexually mature but not necessarily married, which the Greek translation (the Septuagint, LXX), translates parthenos. It is this term that Matthew uses, which our ETs rightly translate ‘virgin’.

Matthew is unembarrassed that the name ‘Immanuel’ (Hebrew imm- ‘with’, –anu- ‘us’, -el ‘God’) does not match the name Jesus, since they both provide the same Christolgoical emphasis. In the work of Jesus we see God saving his people; in the presence of Jesus we see God truly present with his people. Matthew offers in implicit terms what John makes explicit: the Word that was with God and was God has come to his people (John 1.14).

Joseph has been obedient to the word of the law; now he is obedient to the word of the angel in his dream. The process of betrothal and marriage is completed, though with one exception: Joseph does not ‘know’ Mary, the more usual euphemism for sexual union in OT and NT. Matthew has tweaked his OT citation, which talks of either the mother (Hebrew) or the king (Greek) naming the child, and instead says some unspecified ‘they’ will call him by his name. But for Matthew, it is important that Joseph as (adoptive) father now names the baby: ‘And he gave him the name Jesus’.

Thus the genealogy is finally complete; Jesus is indeed the son of David, and as the anointed one will announce, in his ministry, the coming of the longed-for kingdom of God.

Ten years ago, Mark Greene of LICC in London wrote a great reflection on the role of Joseph in the story of the nativity.

There are many characters in the cast of the Christmas story that have gripped the Church’s imagination but there’s one that has rarely had a place in the spotlight.

There’s the Magi, exotic and somehow still gleaming in their silks after the long, dusty road from the East; there’s Gabriel, winged, magnificent, fearsome and gentle, chosen to make an offer that might be refused; there’s Simeon satisfied, no, exhilarated by something apparently so small – not even a hope fulfilled, just a hope assured; and, of course, there’s Mary, young, vulnerable but open to God’s plan and singing out words that will last forever.

The carpenter. The man in the background. Almost always depicted as so much older than Mary, even by Rembrandt. Old enough to be her father – the protector, not the lover, of a young bride. There’s Joe ushering the donkey along the road; there’s Joe being turned away by the innkeepers; there’s Joe watching the Wise Men offer their gifts. No prophetic songs soar from his heart. In fact, the Bible records not a single word of his, and he slips out of the story without even a sentence to mark his passing.

He’s a craftsman, a working man. God did not entrust his son to be fathered by a rabbi or a scribe or a Pharisee or a rich merchant but by Joe. A man who did not need an angel to appear him to change the direction of his life but only a dream. A man who put God’s agenda for his betrothed before his own hopes. A man who left his home and his business for the sake of the girl he loved and the God he loved. A man who set aside the sexual expression of his love for Mary until after Jesus’ birth, just as his son would set aside the joys of marriage and sexual love. A man who risked Herod’s murderous intent and was ready to lay down his life for his bride, just as his son would be ready to lay down his life for his bride – the church.

In an era where we like our heroes articulate, powerful and sparkling, Joe offers a different model. The Bible uses a telling phrase to describe him – he was a good man. Would that be epitaph enough for us? Good old Joe.

Collect for Joseph of Nazareth

God our Father,
who from the family of your servant David
raised up Joseph the carpenter
to be the guardian of your incarnate Son
and husband of the Blessed Virgin Mary:
give us grace to follow him
in faithful obedience to your commands;
through Jesus Christ your Son our Lord. Amen.

10 thoughts on “What does Joseph add to the story of Jesus’ origins in Matthew 1?”