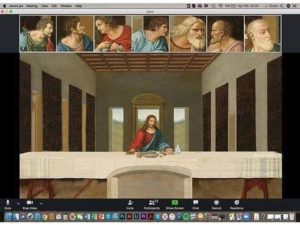 Have you ever sat and read through the gospel accounts of Passion Week, and tried to work out chronologically what is happening? And have you done that with the four gospels? (It is easiest to do that latter using a synopsis, either in print or using this one online.) Why not do it as part of your Holy Week devotions this year? If you do, you might notice several things.

These anomalies have made the question of the Passion Week chronology ‘the most intractable problem in the New Testament’, and it causes many readers to wonder whether the accounts are reliable at all. For some, they are happy to inhabit the narratives in each gospel as they are, and not worry about reconciling each account with the others, or any of the accounts with what might have actually happened.

But I am not sure it is quite so easy to leave it there. After all, the word ‘gospel’ means ‘announcement of good news about something that has happened’; a central part of the Christian claim is that, in the death and resurrection of Jesus, God has done something, and so we cannot evade question of what exactly happened and when. Sceptics (both popular and academic) make much of these apparent inconsistencies, so there is an apologetic task to engage in. And understanding how these issues might be resolved could potentially shed new light on the meaning of the texts themselves.

Three years ago, I caught up with Sir Colin Humphreys’ book The Mystery of the Last Supper, in which he attempts to solve this problem. Humphreys is an academic, and a distinguished one at that, though in materials science. He has written on biblical questions before, though is not a biblical studies professional, but he does engage thoroughly with some key parts of the literature. He identifies the main elements of the puzzle under four headings:

The book is set out very clearly and logically (as you might expect) and includes a good number of tables. Early on Humphreys helpfully tabulates the events in the gospels, showing their relationship. 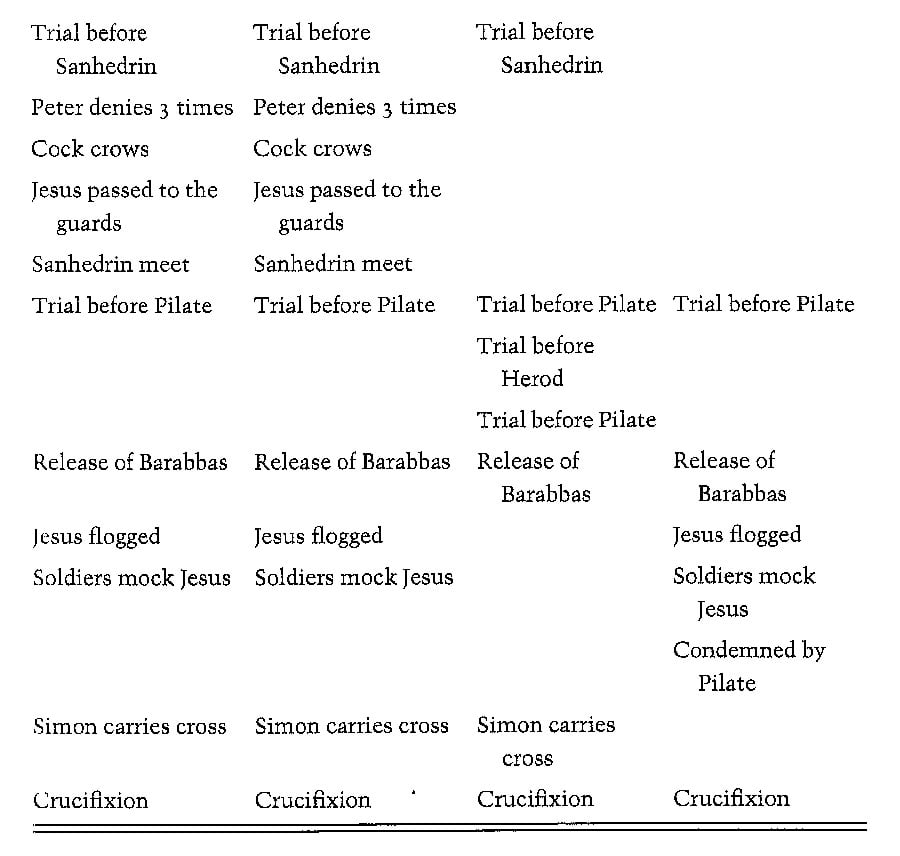 Humphreys then uses other well-established data to eliminate outlying dates, and argues for Jesus’ death at 3 pm on Friday, April 3rd, AD 33. He is not alone in this, though the style of his argumentation will have lost many mainstream New Testament specialists (there is quite a nice, clear argument working through the data at this Catholic site). He assumes that the gospels are historically accurate, and takes them as his basic data, when most scholars would want him to be much more provisional. If the case was expressed more in terms of ‘were the gospels accurate, it would lead to this conclusion’ might have been more persuasive for the guild—but then Humphreys is primarily writing for a popular and not a professional audience. There is no particular problem in asking the question Humphreys does in fact ask: are the narratives we have capable of coherent reading, and if we taken them seriously, what do we find?

I was much more interested, though, in the later chapters, where Humphreys explores the gospel texts in detail in the light of the calendrical background. Although his proposals about the different calendars in use at the time of Jesus are speculative (even if plausible), there can be no doubt that different calendars were in use, and that it is quite likely that different gospel writers are making reference to different calendar schedules which could give rise to apparent anomalies in the gospel chronologies. In particular, some calendars worked sunset to sunset (as Jewish calculation works today), others counted from sunrise to sunrise, and the Roman calendar counted from midnight to midnight, as we do now. It is not hard to see how the phrase ‘on the next day’ can now have three different possible meanings.

It is also clear that the gospel writers vary in the emphasis that they give to chronological issues. So, whilst Luke offers some very specific markers in his narrative to locate the gospel story to wider world events (which has been typical of his overall approach), and John includes frequent temporal markers in relation both to Jewish feasts and successive days of Jesus’ ministry, Matthew is happy to group Jesus’ teaching and ministry into non-chronological blocks, and Mark has long been recognised as linking events in Jesus’ ministry thematically rather than chronologically. Humphreys uses an everyday example to illustrate this: if I cut the lawn and do some weeding, and someone asks my wife what I have been doing, and she says ‘He has been doing some weeding and cut the lawn’ then we would not describe our two accounts as ‘contradictory’. Chronology just hasn’t been an important issue here.

Humphreys’ solution rests on proposing that, in celebrating the Passover with his disciples, Jesus used pre-Exile calendar which ran sunrise to sunrise and was at least a day ahead of the official Jerusalem calendar, so that there could be up to two days’ difference in calculation. This means that, if the Jerusalem Passover took place on the Friday, following the sacrifice of the lambs on Friday afternoon, it would be possible for Jesus to celebrate his own Passover (and not merely a ‘Passover-like meal’ as some scholars have suggested) as early as the Wednesday. Humphreys believes that the man carrying the water jar (in Luke 22.10 and parallels) is a signal that the Upper Room was in the Essene quarter of Jerusalem, where there would not have been any women to undertake such roles. And the calendar differences account for Mark’s statement that the lambs were sacrificed on the ‘first day of the feast of Unleavened Bread’, (Mark 14.12) which is a contradiction that scholars have in the past attributed either to Mark’s error or his careless writing. 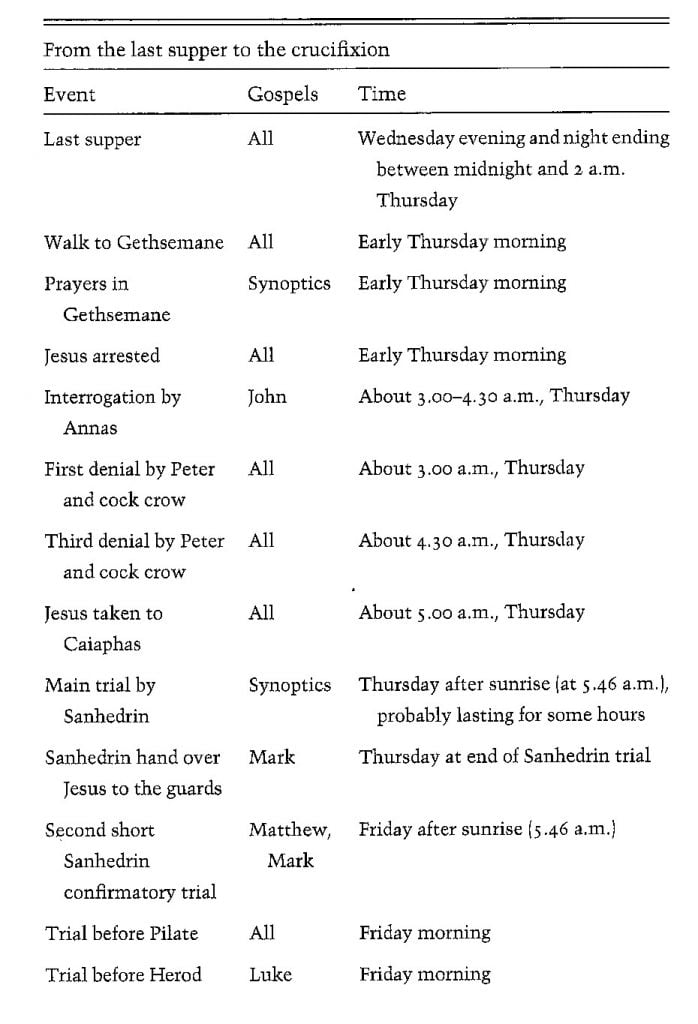 At some points, I think Humphreys’ case is actually slightly stronger than he claims. For example, John’s phrase ‘the Passover of the Jews’ in John 11.55 could arguably be translated as ‘the Passover of the Judeans’, thus emphasising communal and calendrical differences, and Matthew highlights the differences between the crowds of pilgrims and the local Jerusalemites in their response to Jesus. Richard Bauckham has argued that John is writing on the assumption that his readers know Mark, so there is no need for him to recount the details of the Passover meal in John 13 and following. And in the latest edition of Bauckham’s Jesus and the Eyewitnesses, he argues (in an additional chapter) that the ‘Beloved Disciple’ is the author of the gospel but is not John son of Zebedee, and so not one of the Twelve, but a Jerusalemite. This explains some of the distinctive perspectives of John’s gospel with its Judean and Jerusalem focus in contrast to Mark’s focus on Galilee—but would also account for calendrical differences.

There are some points of strain in Humphreys’ argument—for me, the most testing one was Humphreys’ account of the cock crowing three times, the first of which was (he argues) the Roman horn blown to signal the approach of dawn, the gallicinium which is Latin for ‘cock crow’. (I always struggle to be convinced by an argument that claims a repeated phrase actually means different things at different times when the phrase is identical.) But there are also some interesting ways in which his reading makes better sense of some details of the text, such as the dream of Pilate’s wife—which she could not have had time to have under the traditional chronology. Moreover, one of our earliest testimonies to the last supper, in 1 Cor 11.23, does not say (as much Anglican liturgy) ‘on the night before he died’ but ‘on the night that he was betrayed’. I will be sticking with the latter phrase in my future use of Eucharistic Prayers! And when Paul says that Christ our Passover has been sacrificed for us (1 Cor 5.7), and that he is the first fruits of those who sleep (1 Cor 15.20), Paul is reflecting his death on Passover (as per John, even though in other respects Paul’s account matches Luke, and it is largely Paul and Luke’s language we use in liturgy) and his resurrection on the celebration of First Fruits two days later.

Humphreys is certainly bold in taking on key scholars, including Dick France (with whom I would always hesitate to disagree), but in every case he gives citations and explains where the disagreement lies. When the book was first published, Mark Goodacre wrote a brief blog on why he disagrees, and the debate in comments—including from Humphreys himself—are worth reading. Goodacre’s main concern is Humphreys’ anxiety about demonstrating the reliability of the gospel accounts, and the need to eliminate contradictions.

But I wonder whether concern about this aim has led many scholars to dismiss the detail too quickly; much of academic scholarship is ideologically committed to the notion that the gospels are irredeemably contradictory. (If I were being mischievous, I would point to the irony of Mark’s resisting Humphrey’s challenging of a scholarly consensus, when that is precisely what Mark is doing himself in relation to the existence of ‘Q’, the supposed ‘sayings source’ that accounts for the shared material of Luke and Matthew…!) And we need to take seriously that fact that Humphrey’s approach resolves several key issues (including the silence of Wednesday, the lack of time for the trial, the reference in Mark 14.12, and Pilate’s wife’s dream) that are otherwise inexplicable or are put down (slightly arbitrarily) to writer error.

I think there are some further things to explore, but it seems to me that Humphreys’ case is worth taking seriously. (Published in earlier forms in the last three years. I repost it here, since I think it bears repeating—and delving into the gospel narratives is always a valuable devotional activity. The picture of the Last Supper enacted on Zoom seemed apposite this year.)

14 thoughts on “What actually happened in the first Holy Week?”