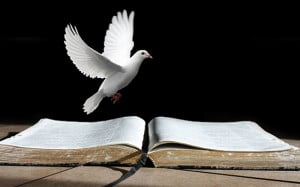 There is a widespread view that the work of the Spirit and the work of critical study of the Bible are like oil and water—they simply don’t mix. This is reinforced from both directions. People who read the Bible devotionally often look distinctly nervous when the subject of ‘academic’ study of the Bible comes up. Where mosques and other places of worship have a rack by the entrance where you can take off your shoes and leave them outside, it feels as though for many churches there is a similar rack by the entrance where you can leave your brain as you come in. (It might be metaphorical, but it is there!) On the other hand, there are many in the academy who see ‘committed’ reading as polluting the ‘objectivity’ of the academic process.

The general nervousness about all this is sometimes expressed in relation to university courses. Christians shouldn’t study theology because it will undermine their faith. I have seen the (ironically) unthinking imposition of a liberal ‘fundamentalism’ imposed on Christian students in a very damaging way, but this is less likely today, not least because of the growth of evangelical critical thinking. In fact, it is vital that we connect head and heart in our articulation of faith, for our own wellbeing but also to be effective in an increasing sceptical and post-Christendom context—though there is still a question as to whether a university course is the right place to do this for everyone.

However, the most compelling reason for holding together the work of the Spirit and the task of critical judgement together is because this is just what the Bible does. The Spirit and judgement are brought together explicitly in John 16.8, where Jesus expounds the Spirit’s role in discerning the difference between what is holy and what is not through a process of critical discernment. (The Greek for ‘judgement’ is krisis from which we get the word ‘critical.’) We see the Spirit at work in explicit actions of judgement in Acts 5, in the (baffling to the modern ear) account of Ananias and Sapphira. And against the Corinthians’ superficial ease with judging each other, it is striking that Paul does not reject the notion of judgement as such, but reconfigures it through the lens of the work of the Spirit. Early on, in 1 Cor 2.15, Paul asserts that ‘The spiritual person makes judgements about all things’, and in context we should understand this as being ‘the person with the Spirit’ which is Paul’s definition of a follower of Jesus (1 Cor 12.3). In fact, discernment between people and the ‘spirit’ in which they are operating is one of the gifts of the Spirit (1 Cor 12.10), the word being again a compound of krineo ‘to judge’.

So why have we ended up ourselves with seeing a gulf between the ideas of judgement and discernment, a discriminating evaluation of different viewpoints on the one hand, and the work of the Spirit on the other? In part, the answer is rooted in the Enlightenment paradigm of rational enquiry that has shaped our intellectual life. Discernment is the work of the autonomous, sensing self who sits at the centre of his or her world, and needs no outside agency to help in this process. Indeed, any outside agency is just that—outside the individual, and therefore not to be trusted until sifted and evaluated by the individual.

But another reason is the way we have configured our expectations of the work of the Spirit as we read Scripture within our pietistic spirituality. As I reflect on the pattern of Bible reading I was (helpfully) inducted into, I see four strands to it:

1. Immediacy. We expect to open the Bible and immediately to hear God say something to us. Some years ago a joke was doing the rounds about someone who read the Bible by opening a page and sticking a pin in it. First he read Matt 27.5 ‘Judas went and hanged himself’ and thought that that couldn’t be right. So he did it again and read Luke 10.37 ‘Go thou and do likewise’, and was sure there was some mistake. So he did it a third time, only to read John 13.28 ‘What you are about to do, do quickly.’ The reason that this is funny is because it reflects a lot of people’s approach to how to read the Bible devotionally. We don’t expect to have to wait for an answer or to do any work in listening for it.

2. Clarity. We not only expect God to speak to us, we also expect God to speak clearly, without ambiguity. A popular Christian poster once depicted Abraham hearing God’s call and responding by asking a series of questions, each of which because a question mark that he then had to carry. At the end he has more to carry than he can cope with, and the final slogan was ‘It is hard to be a disciple with all these questions.’ The moral was clear: if you are uncertain about what God is saying, then you lack faith. A vicar of a church I used to attend had a motto: “If God asks you to jump, the only question you ask is ‘How high?”‘ I didn’t find it helpful.

4. Familiarity: For many of us, when we first came to faith and the Spirit of God breathed new life and understanding into our lives, it was a strange and wonderful thing that this God continued to speak to us through the pages of Scripture. But often an odd thing then happens. At some point or other, this becomes ‘our’ book, and we feel we know it. It is reassuring and familiar. We know what it says, and it no longer surprises us. I notice this most clearly when I am looking with people at familiar passages and pointing out that (as in the case of John 3.16) most people misunderstand what the text is actually saying.

There is a sense in which all these things are true; God does speak clearly to his people (note the plural!) and form them through the faithful reading of scripture. But I cannot help thinking that these expectations are formed as much by Romanticism (as a reaction against the aridity of rationalism) as they are by Scripture itself. And when we engage in critical study of some sort, there is a rude awakening, because we experience four quite different things:

1. Delay. Spending the best part of a decade in a theological college, where we read the Scriptures in chapel before studying them in class, was instructive. At the end of the reading, when the reader said solemnly, ‘This is the word of the Lord’ there was quite often a collective sense of wanting to respond ‘What is? In what way? And what does it even mean?’

2. Ambiguity. It is quite difficult to be confident in the clarity of God’s word to us when there are 18 possible interpretations of this particularly verse, with three main contenders who have a strong case but are mutually contradictory.

3. Distance: The more I read and study the Scriptures, the more I am clear that the biblical writers lived in a very different culture from ours, and so begin and continue with some very different assumptions about the way the world works. Of course, they share the same humanity and the same faith in God, but it is expressed in ways that are at a distance from our own world.

4. Strangeness. Richard Dawkins has got at least one thing right; the Bible is a strange book, and we should worry when we feel it is too familiar. When I was driving a lot a few years ago, I listened to a recording of John’s gospel read by David Suchet. When I had listened to chapter 6, 7 and 8 my overwhelming feeling was that this Jesus was a very strange person indeed. It might have been the context I was in, or my mood, or David Suchet’s voice—but I have a feeling that it was really something to do with John’s gospel and Jesus I found in it! There is a wonderful short essay at OnFaith explaining why it is best to categorise the Bible as fantasy literature, because it is so strange. 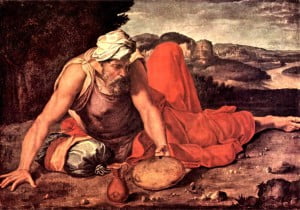 Before we try and resolve these things, we need to note one point of encouragement: these latter four have been the widespread experience of the people of God, and they are the things which prevent us domesticating God and making him in our own image. Think of Elijah on the mountainside in 1 Kings 19; if ever anyone should think that God was clear and unambiguous in what he was saying, it was Elijah, yet here he is baffled and bemused. Or think of Daniel wrestling with Jeremiah’s prophecy in Daniel 9. Or of John the Baptist trying to make sense of Jesus in Matt 11.3. Or the Council of Jerusalem wrestling with God’s new work in Acts 15. If we experience these four things in our reading of Scripture, we are in good company!

Having explored the problem, in the next post I will look at ways in which we can, in fact, hold these two sets of experience together, and how doing so actually meshes with the work of the Spirit in our formation and learning.

29 thoughts on “The Spirit and critical study (1)”