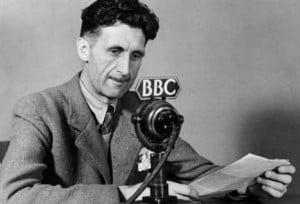 I recently came across a fascinating essay by George Orwell from 1946 on ‘Politics and the English Language.’ Orwell was such a remarkable character, with such insight, that anything he wrote is worth looking at. One of the most important things I did in my whole time in school was to have to read Animal Farm as part of an English project on ‘Eutopias and alternative worlds’ as part of English O-level.

In the essay, Orwell laments the decline of political language. (If he were alive today, he would be turning in his grave!). He looks a number of poor examples, and offers an analysis, but what is most fascinating is the reference point he goes to for an example of good, compact and powerful speech—the Bible:

Now that I have made this catalogue of swindles and perversions, let me give another example of the kind of writing that they lead to. This time it must of its nature be an imaginary one. I am going to translate a passage of good English into modern English of the worst sort. Here is a well-known verse from Ecclesiastes:

I returned and saw under the sun, that the race is not to the swift, nor the battle to the strong, neither yet bread to the wise, nor yet riches to men of understanding, nor yet favour to men of skill; but time and chance happeneth to them all.

Here it is in modern English:

Objective considerations of contemporary phenomena compel the conclusion that success or failure in competitive activities exhibits no tendency to be commensurate with innate capacity, but that a considerable element of the unpredictable must invariably be taken into account.

This is a parody, but not a very gross one. … It will be seen that I have not made a full translation. The beginning and ending of the sentence follow the original meaning fairly closely, but in the middle the concrete illustrations — race, battle, bread — dissolve into the vague phrases “success or failure in competitive activities.” This had to be so, because no modern writer of the kind I am discussing — no one capable of using phrases like “objective considerations of contemporary phenomena” — would ever tabulate his thoughts in that precise and detailed way. The whole tendency of modern prose is away from concreteness.

Now analyze these two sentences a little more closely. The first contains forty-nine words but only sixty syllables, and all its words are those of everyday life. The second contains thirty-eight words of ninety syllables: eighteen of those words are from Latin roots, and one from Greek. The first sentence contains six vivid images, and only one phrase (“time and chance”) that could be called vague. The second contains not a single fresh, arresting phrase, and in spite of its ninety syllables it gives only a shortened version of the meaning contained in the first. Yet without a doubt it is the second kind of sentence that is gaining ground in modern English. I do not want to exaggerate. This kind of writing is not yet universal, and outcrops of simplicity will occur here and there in the worst-written page. Still, if you or I were told to write a few lines on the uncertainty of human fortunes, we should probably come much nearer to my imaginary sentence than to the one from Ecclesiastes.

As I have tried to show, modern writing at its worst does not consist in picking out words for the sake of their meaning and inventing images in order to make the meaning clearer. It consists in gumming together long strips of words which have already been set in order by someone else, and making the results presentable by sheer humbug. The attraction of this way of writing is that it is easy. It is easier — even quicker, once you have the habit — to say In my opinion it is not an unjustifiable assumption that than to say I think. If you use ready-made phrases, you not only don’t have to hunt about for the words; you also don’t have to bother with the rhythms of your sentences since these phrases are generally so arranged as to be more or less euphonious.

When you are composing in a hurry — when you are dictating to a stenographer, for instance, or making a public speech — it is natural to fall into a pretentious, Latinized style. Tags like a consideration which we should do well to bear in mind or a conclusion to which all of us would readily assent will save many a sentence from coming down with a bump. By using stale metaphors, similes, and idioms, you save much mental effort, at the cost of leaving your meaning vague, not only for your reader but for yourself. This is the significance of mixed metaphors. The sole aim of a metaphor is to call up a visual image. When these images clash — as in The Fascist octopus has sung its swan song, the jackboot is thrown into the melting pot — it can be taken as certain that the writer is not seeing a mental image of the objects he is naming; in other words he is not really thinking.

All this is both a wonderful challenge and a wonderful encouragement. The challenge is that, as we read, interpret and proclaim scripture, we need to engage seriously with the metaphors. My conviction is that metaphorical speech is a distinctively Christian way to use language—almost everything that Scripture and Christian theology says about God is cast in metaphors.

But the encouragement matches this. In preaching, we are surely searching for the kind of compelling and engaging speech that Orwell is writing about. And our primary source material—Scripture—is saturated with such compelling language. The challenge in preaching, then, is not to turn the metaphors of scripture into dull propositions, but to breath new life and vigour into them. We need to explore them, explain them, understand them in their context—but the aim of all this will be to allow the metaphors to live again, and do their work in remaking the understanding of the hearers.

(If the University of Exeter’s advice is heeded, we might even see a revival of the use of the Bible in schools…)

4 thoughts on “The power of biblical metaphor”