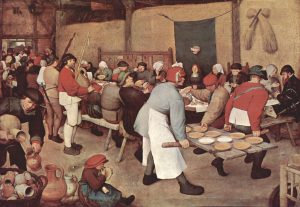 The lectionary gospel reading for Trinity  11 in Year C, Luke 14.1, 7–14, continues to engage with material that is unique to Luke, arranged in Luke’s distinctive order, and bridging the worlds of the original context of Jesus and Judaism and Luke’s context in wider Roman culture.

The passage comes in a sequence of episodes that don’t look to the modern reader to be very closely linked, but appear to have verbal or thematic connections with one another like adjacent stepping stones crossing a stream. In last week’s reading, we learned that the apparently insignificant healing of a woman was in fact the work of the kingdom which would leaven the whole batch of dough. The smallness of the work of the kingdom then links to the smallness of response to the kingdom in terms of the surprisingly few who will be saved (Luke 13.23–25). This then links to the surprising people who enter the kingdom, not being the ones who are expected, and in turn connects to the rejection of Jesus by Herod (perhaps less surprising, Luke 13.31) and the city of Jerusalem (more surprising, Luke 13.34), these two representing the northern and southern bases of power and influence. We then arrive at our lectionary reading, set on some unspecified Sabbath in some unspecified Pharisee’s house.

That Jesus is welcomed into the house of a ‘prominent Pharisee’ (literally, ‘a ruler of/amongst the Pharisees’) demonstrates that, at least for some of his ministry, Jesus had a close relationship with the Pharisee movement, even though most of the material in the gospels sees him criticising them. Pharisees did become his followers (John 3.1, 12.42), they had just warned him about Herod in a supportive way, and he commended their teaching (Matt 23.2).

The lectionary omits the healing story that comes next, which is a shame, since it provides an important part of the context of the teaching that follows. The healing narrative follows quite closely, though in abbreviated form, the healing of the woman bent double in the previous chapter. Within Jesus’ Jewish context, the main question presented here is the disputed question of healing on the Sabbath; as before, Jesus argues from the lesser to the greater, and, as before, mentions an ox as one (along with family members) to whom Sabbath practice also applies, but whom any normal person wouldn’t fail to assist.

But, in Luke’s Graeco-Roman context, the story has further significance. The man’s condition is translated ‘dropsy’ in older translations, but we would now call it edema, the swelling of parts of his body because of the accumulation of fluids. The Greek term Luke uses, ὑδρωπικὸς, suggests the accumulation of fluid. Once more, in Greek thought, the bodily symptoms indicated a sickness of the inner person—in this case, it was thought to indicate insatiable greed.

In the case of dropsy the thirst of the sufferer never ceases and is never allayed by the administration of liquids from without, unless we cure the morbid condition of the body itself, so it is impossible to satiate the greed for gain, unless we correct by reasoning the vice inherent in the soul. (Polybius, Hist, 13.2.2, cited by Mikeal Parsons, Paideia commentary, p 226).

In the healing, then, Jesus is not only established as the authoritative teacher (as before), but also as the one who can cure the condition of the greed and desire for gain and status.

This brings us to his teaching in the lectionary reading; here is the moment when the watched becomes the watcher and the tables are turned (pun intended!). Although Luke uses the term ‘parable’ here, he has used it fairly flexibly elsewhere (Luke 4.23, 5.36). The two lessons that follow are very closely related, though some ETs don’t show the parallels very clearly, told from the two perspectives of being invited to a feast and doing the inviting oneself. (It is worth noting here that Jesus is, in offering these two ‘parables’, addressing those without power as well as those with power.)

The first is the question of honour and social status. Social status and social stratification were vital aspects of life in the ancient world; where you sat in the pecking order determined every aspect of your life—your work, your income, who you could associate with, and with whom you could intermarry—and the places around a meal, nearer or further from your host, were a tangible expression of this status. And the culture was one of struggle and competition; status was something for you to compete for and grasp, and if you climbed up the social order it was by your own efforts. Jesus’ teaching here not only undercuts the importance of status; it also sees status and standing as something that is given, not something that is gained—a gift from another (specifically God), not something accrued by one’s own effort. The importance of God as the one determining honour and status is expressed in the ‘divine passive’ in the summarising statement in Luke 14.11.

This connects, then, with the other aspect of life in the ancient world, and particularly in Roman culture. Gift-giving was a vital part of the mechanism of social exchange; if I give you a gift, then you are in my debt, either to give me a gift in return, or to offer me some favour or other. Jesus’ teaching here, expressed in the language of God’s grace in Paul’s writings, was radically counter-cultural. This is how John Barclay describes it in his exploration of the subversive power of grace:

It was very common in Paul’s world to speak of the worth of the recipient. Gifts should be given lavishly but discriminately, to fitting or worthy recipients. ‘Worth’ could be defined in different ways, according to a number of criteria—ethnicity, social status, age, gender, moral virtue, beauty or success. Just as, today, prizes might be awarded on different grounds (for musical, literary, sporting or academic achievement) but keep their value only if they are given discriminately, to people worthy of them, so the good gift in antiquity was normally given according to some criterion of worth. And this was true also of the gifts of God (or the gods). God would hardly waste gifts on the unfitting, or confuse the moral or social order by giving to unworthy recipients. It was obvious to ancient philosophers that God’s best gifts would be given to those who are free (not slaves), to the educated, the male, the virtuous and the grateful. If you receive a divine gift, it is ‘because you are worth it.’

For this reason, the most subversive gift is the gift given without regard to worth (what I described above as the fourth possible radicalization of grace, ‘incongruity’). If you expect God to give the best gifts to the freeborn adult and educated male, but if you find that, in fact, these gifts are given both to the free and to slaves, both to adults and to children, both to the educated and to the uneducated, both to males and to females, your whole notion of worth, and thus your social values, is thrown into disarray.

There are two further things to note in relation to this disruption of personal and social values, related to where they come from and where they are going.

First, Jesus’ teaching here is rooted in the Old Testament—in fact, his advice sounds almost word for word like material from Proverbs.

Do not exalt yourself in the king’s presence, and do not claim a place among his great men; it is better for him to say to you, ‘Come up here,’ than for him to humiliate you before his nobles. (Proverbs 25:6-7)

In fact there are numerous sayings, in the Old Testament and cited in the New, which follow a similar theme.

“Blessed are the poor in spirit, for theirs is the kingdom of heaven.” (Matthew 5:3)

“You save the humble but bring low those whose eyes are haughty.” (Psalm 18:27)

“No one from the east or the west or from the desert can exalt themselves. It is God who judges: He brings one down, he exalts another.” (Psalm 75:6-7)

“When pride comes, then comes disgrace, but with humility comes wisdom.” (Proverbs 11:2)

“Pride brings a person low, but the lowly in spirit gain honor.” (Proverbs 29:23)

At one level, Jesus is teaching nothing new here, but is restoring his people to the heritage that God has always been calling them to.

And yet there is another important pointer to the nature of these values. Luke here records the language of ‘wedding feast’ on the lips of Jesus, but once again he uses terms describing meals interchangeably, so we might think of this as applying to any meal. But having mentioned a wedding feast, Luke follows this with Jesus’ teaching about the wedding feast in the kingdom of God. In other words, the disruption to social order and social values is a bringing into the present of the future reality of the coming kingdom. Richard Hays comments:

In the Lukan narrative context … this teaching becomes more than a pragmatic hint about court etiquette; it is implicitly a directive about how the coming kingdom should impinge already on the present, producing a reversal of values and status. In the eschatological kingdom of God, the last will be first and the first last (Luke 13:30); therefore, those who are Jesus’ followers should begin already to assume roles of lowliness (cf. Luke 22:24-27).

And Alistair Roberts reflects on this:

It is no accident that meals and shocking departures from the prevailing manners at them are such a central aspect of Jesus’ prophetic practice and teaching in the book of Luke. Jesus’ meals were a symbolic means by which he was reforming Israel around himself. Those who rejected Jesus would find themselves outside of the eschatological feast, while the poor and the outcasts celebrated within. They were also a means of inculcating a radical new habitus in his followers, training them in new manners, values, and community, conforming them to the order of the kingdom of God.

A communal meal remains a central feature of the Church’s ongoing worship in the Eucharist. Politics and the manners and social relations that correspond to them are first learnt at the table. It is at the Eucharist that we begin to learn the manners and politics of the kingdom, where we are trained to act as cultivated members of the court of its King. It is at the Eucharist that we can learn to put others before ourselves, to extend God’s goodness to those without the power to repay, to live as a thankful people, and to release people from their debts to us. As these new manners and politics become second nature to us, they should extend out to and be confirmed in all areas of our lives and practice.

Together, then, this section of teaching offers us three challenges—or perhaps opportunities. As we reflect on issues of social status, treatment of others, and inclusion and exclusion in our own cultures, we note that:

3 thoughts on “The Politics of the Table in Luke 14”