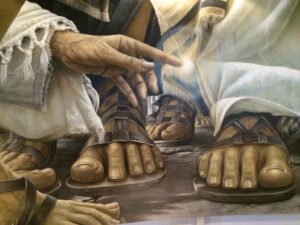 I write a column for Preach magazine, in which I explore a significant word or phrase in the Bible and the ideas that it expresses. The first one was on the phrase ‘Word of God’, and second on ‘Justice’, the third on ‘Mission’ and the fourth on ‘Apocalypse‘.  This one, published in Preach Magazine issue 24 Towards Healing, explored the place of healing within the biblical narrative, including some surprising puzzles.

There is something of a puzzle about the importance of healing within Christian mission and ministry. Historically, the gospel has always been taken to new contexts along with a twin focus on education and health—the building of both schools and hospitals. Education is no surprise, since the word ‘disciple’ means ‘someone who is learning’. But why the importance of health and healing? After all, there are large parts of Scripture where healing appears to play no part at all.

The ‘fall’ of humanity, depicted in the narrative about Adam and Eve eating the forbidden fruit in Genesis 3, sets out the terrible consequences of our alienation from God—though does not explicitly suggest the need for healing. But we see hints developing of a new perspective during the Exodus journey through the wilderness. Venomous snakes afflict the people because of their sinful grumbling, but they can look at the bronze snake held aloft by Moses and receive both healing and forgiveness (Num 21.4–9).

Healing features in close association with sin in several of the prophets of Israel:

Come, let us return to the Lord. He has torn us to pieces but he will heal us; he has injured us but he will bind up our wounds (Hos 6.1).

Here, the northern prophet Hosea imagines sinful Israel returning to the Lord in repentance for sins. It is clear from the rest of the chapter that the ‘wounds’ Israel has suffered are the judgement and condemnation by the prophets, sent from God, provoked by the people going after other deities. Sin has caused the relationship between God and people to be broken, and it is this that needs healing.

The later, southern prophet Isaiah begins his oracles by denouncing the ‘sinful nation’ whose forsaking of God means that ‘your whole head is injured, your whole heart afflicted’ (Is 1.4–5). The vision of a new age when God’s anointed ruler comes will not only be marked by ‘righteousness’ but also by peace, safety and a lack of ‘harm’ (Is 11.9). The mysterious ‘suffering servant’ of Is 53 not only bears our ‘iniquities but also our ‘pain and suffering’; he not only provides an ‘offering for sin’ (Is 53.10) but also ‘by his wounds we are healed’ (Is 53.5). It is, then, no surprise that the anticipated anointed one will bring healing to the broken-hearted, along with freedom and comfort (Is 61.1).

This double focus on forgiveness and healing marks the ministry of Jesus from the beginning. Mark summarises Jesus’ early preaching as announcing the coming kingdom and so calling for ‘repentance’ (turning from sin, Mark 1.15) but summarises his ministry as ‘healing many who had various diseases, and driving out demons’ (Mark 1.34). Forgiveness and healing are often closely associated; when four friends bring a paralysed man to Jesus, I don’t suppose they anticipated that Jesus’ first word to him would be ‘Son, your sins are forgiven’ (Mark 2.5). But the man’s healing soon follows, outward proof of the inward reality Jesus has effected. The close connection is expressed in the common term sozo which can have the sense of both healing and saving; so Jesus tells the woman with the issue of blood: ‘Your faith has saved/healed you’ (Mark 5.34).

Despite the close association between the two, Jesus makes it clear to his disciples in John 9.3 that the sin of an individual or those around him or her are not the cause of a particular illness or disability. But both sin and sickness appear to be consequences of our disconnection from God as author of both life and health. This double ministry continues amongst the early followers of Jesus, who demonstated that ‘everyone who calls on the name of the Lord [Jesus] will be saved’ (Acts 2.21, Rom 10.13), and that ‘it is Jesus’ name that completely heals’ (Acts 3.16).

So the narrative of Scripture is that we have not just done the wrong of turning from God and committing sin, but that that wrongdoing has wounded both us and others. If we are going to be reconciled to God, we not only need forgiveness—we also need healing. The narrative reaches its climax and completion as the holy presence of God, seated on his throne in the New Jerusalem, comes to earth—and brings with him all healing from pain, suffering and grief (Rev 21.4).

The city is a place of uncompromising holiness—‘nothing impure will ever enter it’ (Rev 21.27)—but also of universal healing—the gates are open continuously (Rev 21.25) and the leaves of the tree planted by the river of life are ‘for the healing of the nations’ (Rev 22.2). Here we find a perfect vision of holiness and wholeness.

(The image at the top is from the stunning wall painting in the lower Encounter Chapel of the newly built Duc in Altum church at Magdala on the Sea of Galilee.) 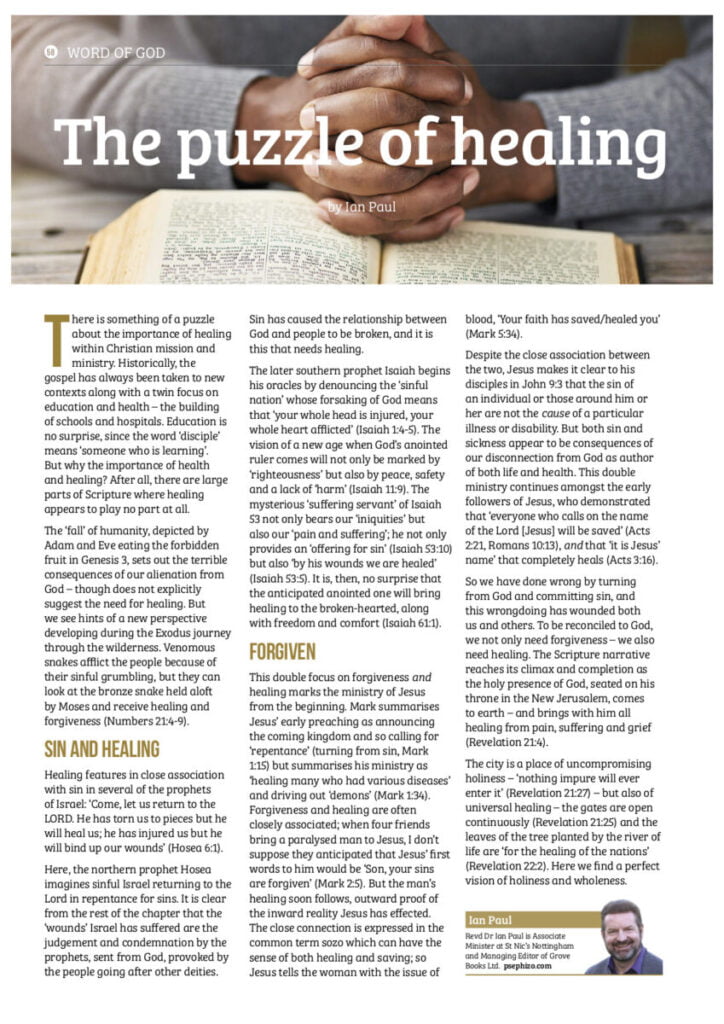 2 thoughts on “The place of healing in the biblical story”