Coming once again to the New Testament texts about Pentecost, I have been struck by the extraordinary dynamism which seems to be present in every aspect. In the gospels, Jesus is the dynamic focus of action—constantly on the move physically as a way of expressing the dynamic presence and movement of God in his ministry—and the disciples trail behind, astonished, stumbling, only half-comprehending and at times becoming an obstacle in his path. Yet now, with the outpouring of the Spirit, the dynamism of Jesus takes shape in the dynamism of the disciples themselves, and not just the 12. (I think the illustration above captures the sense of movement much better than many classic images in which the disciples are seated, passively, as the Spirit comes.)

The movements mentioned in Acts 2.1–11 are in many directions, and appear at one level to set the agenda for the rest of the book. Although the whirl of activity slows down as the chapters move on, and the narrative at times becomes more reflective and extended, there is still a sense 27 chapters later that the motive force unleashed at Pentecost continues to have momentum.

From heaven to earth

The Twelve and their company have just witnessed Jesus being taken up to heaven in the clouds at the Ascension, the fulfilment of Dan 7 as anticipated by Jesus on the Mount of Olives (Matt 24.30) at his trial (Mark 14.62). And the angel has promised that this Jesus ‘will return in the same way you saw him go’. Yet rather sooner than this, there is ‘the roar of a rushing wind from heaven.’ The Spirit has been sent from heaven by Jesus who has ascended to the Father in heaven, and as a result there is a connection between heaven and earth that there hasn’t been before. The coming of the kingdom of God has begun in the lives of those filled with the Spirit.

From private to public

In the gospels, the private domain features more than we might at first realise. A good deal of Jesus’ teaching has been given in private, and part of the purpose of the parables has been to distinguish between those on the ‘inside’ and those on the ‘outside’ (Mark 4.11). Even at the resurrection, the disciples have kept themselves in locked rooms out of fear, and Jesus’ appearances have been to them alone. Yet now the doors have burst open, and what was private and hidden is now being proclaimed as public truth.

From individual to communal

There are a good number of stories in the gospels about individuals, and about individual disciples—especially Peter, James and John, Matthew (Levi) and Judas. But in the account of Pentecost there is a new sense of communal identity; although Peter is the spokesman here (and his actions in the first half of Acts are then mirrored by the actions of Paul in the second half), he stands up ‘with the Eleven’. There is a powerful sense of acting together, in shared understanding and shared sense of purpose. One of the repeated refrains of Acts is that ‘all the believers were one’ (Acts 2.44).

From the exclusive to the universal

In the account of Acts 2, Luke emphasises the global significance of this moment. Jews were visiting Jerusalem ‘from every nation under heaven’, and in case we have missed the important of this, he has them repeating (in the style of a Greek chorus) the list of places around the known world they have come from. At first this looks like something to do with the spread of Judaism in its diaspora, but we know how the story ends, and can see that this is an anticipation of both the Gentile mission in Acts, and the vision in Revelation that the covenant people of God, historically confined to one ethnic group, will in fact be drawn from every ‘tribe, language, people and nation’ (Rev 7.9). Covenant and creation meet in the redemption that is found in Jesus.

But this move from the exclusive to the universal is not just about the boundaries of the new covenant people, it is also about their inner life. In the OT, the Spirit was given to particular people for particular tasks. But now the Spirit is poured out on all—young, old, male, female, all will participate in the prophetic task of the people of God.

From future to present

For Peter, this Pentecost signals the moment when the future becomes the present. ‘This is that’ he proclaims ‘about which the prophet Joel spoke.’ The end times are now upon us; the future God has for the world has now broken in in anticipation of the end. The Spirit-empowered life we now live is a foretaste of the heavenly reality that is to come, when ‘the earth will be filled with the knowledge of the glory of God as the waters cover the sea’ (Hab 2.14)

I discovered a new plant last year—the Byzantine gladiolus. It flowers early with a beautiful magenta bloom. I planted 100 bulbs all around the garden last year—and this week the first one is showing its first flower. But I know this is only the beginning, a mere foretaste; soon the garden will be full of its dazzling colour. This, says Peter, is what the Spirit at Pentecost is like; it is the first fruits of the glory that is to come (Romans 8.23).

From confusion to clarity

The disciples were devastated by Jesus’ death—but the resurrection not only brought them wonder, but further bewilderment. Jesus needed to continue to teach them about the kingdom for 40 days, and they still didn’t quite get it! Yet when the Spirit came, they finally understood.

This movement from confusion to clarity is then seen in the crowds. They are baffled by the events going on amongst them, as they try to make sense of these rude Galileans speaking their own language. But with Peter’s Spirit-filled preaching, clarity breaks through, and vast numbers come to repent, believe and receive the Spirit for themselves. 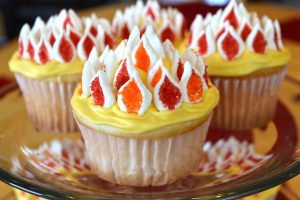 These are at least some of the movements in this dynamic outpouring of the Spirit. This Pentecost, both church and world need to experience these movements afresh. Come, Holy Spirit.

(And if anyone knows how to make these Pentecost cupcakes, count me in!)

4 thoughts on “The dynamism of Pentecost”