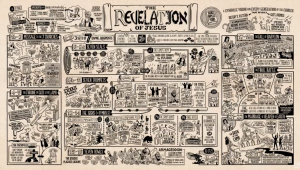 I think I had been aware of The Bible Project very vaguely in the past, but for some reason only looked at it more carefully when someone told me how helpful they had found it in the last few days. I am not sure whether lots of friends are using it and just haven’t mentioned it—or whether it remains an undiscovered secret on this side of the pond.

The Project is essential a collection of animated videos on their YouTube channel which offers not only introductions to all the books of the Bible, but explorations of biblical themes and ideas, and really good material on how to read the Bible. It is produced by a crowd-funding collaboration between Tim Mackie, who has a PhD in Old Testament, and Jon Collins, who studied theology and then went on to be an animator. They met at Multnomah Biblical Seminary, which is evangelical and premillennial, but the the videos deliberately avoid ‘tribal’ readings (as they explain in this interview) and offer a broad, theological reading of the texts. Their short, introductory video is a good place to start in seeing what they are aiming for:

In exploring, I naturally turned first to their book videos on Revelation. As with other longer books, this is split into two parts, the first looking at Rev 1–11 and the second at Rev 12–22. These illustrate the typical ‘whiteboard animation’ style that they use for individual books of the Bible.

There are lots of things that I really liked about these two videos. The ‘whiteboard animation’ is engaging, and actually includes some detailed information that is passed over in the script, so it is worth paying careful attention to, and watching a couple of times if you are not very familiar with the text of Revelation. From the beginning, it sets out the three main genres of Revelation—as apocalypse, prophecy and letter—and puts each of those in a brief historical and cultural context. As a result, it pays careful attention to both the historical and the canonical context of the book, repeatedly highlighting the way that Revelation takes up and re-uses Old Testament imagery. But perhaps the most powerful thing about the script and the supporting animation is the way that this introduction manages to offer an overview of the overall shape of the book, pointing out the ways in which earlier parts of the text anticipate things that come later, which are expanded on.

I was particularly interested in the way that they handled the closing chapters and the questions of final judgement and the return of Jesus. Despite both having studied theology at a institution committed to a premillennial understanding, they simply note that as one possible view, and offer alternatives, without making very much of the theological disagreement, preferring to focus on what is common in the reading of the text.

There are a couple of things that I would take a slightly different view on. I think it is a shame that the background story (of Apollo and Leto) was not mentioned in passing at the beginning of the second video, and I am not persuaded that the blood on the robe of the rider on the white horse is Jesus’ own blood, mostly because there are too many correspondences with the grape harvest scene in chapter 14 (though their coverage of the dual harvest there is excellent)—on both of which see my commentary. But overall, this is an excellent introduction and, like all the videos on books of the Bible, ends up by producing the complete graphic which I have at the top of this article.

They are adding mini-series on specific sections of the biblical text, and one that is now available is on Luke-Acts, which might be of interest to anyone reading Luke with the lectionary this year. I think I was slightly less convinced about these, since they are longer than the individual book videos, but not long enough to include significant detail. For example, the video on Luke 3–9 did not mention the miraculous catch of fish in Luke 5, which I think is a significant episode.

A second type of video, using a different animation style, focusses on biblical themes. I watched the Exile theme, since we are looking at this in our current sermon series:

This does a really excellent job at looking at exile as a theological theme in the Old Testament, connecting it to our own existential experience of exile, and suggesting this as a way of understanding the importance of Jesus’ ministry in the New Testament and the way it is understood. If you are theologically alert, you will see the fingerprints of Tom Wright’s theological reading in this—though they do not mention Wright anywhere as an influence.

Related to the biblical themes are a series of really helpful videos offering word studies, in yet another animation style. There is a cluster based around the Shema in Deut 6.4, and I was very struck by the one on nefesh (since I had done some work on this myself recently). As the video points out, this word is often translated ‘soul’, but that is very unfortunate, since it suggests a Greek philosophical dualism between body and soul which is absent from the Hebrew thinking of the Old Testament. They rightly start with the literal sense of nefesh as ‘throat’, and illustrate the way the word is used in different contexts, citing specific verses, before returning to reflect on its meaning within the Shema ‘love…with all my nefesh‘. I think it is a great little study that has wider significance for how we read the OT more generally.

A quite distinct group of other videos tackles questions of how we read the Bible overall, particularly focussing on questions of reading different kinds of writing, and learning to be aware of issues of literary criticism around narrative, poetry, law and so on. (I was interested to note that some of the typography suggested a debt owed to Stuart and Fee’s landmark How to Read the Bible for All Its Worth.) I would guess that many ‘ordinary’ readers of the Bible could be put off at this point, worried that you have to become some sort of literary expert before you can simply pick up your Bible. But in fact the explanations draw very effectively on everyday examples, and are very accessible. I think one of the later videos in this series, on the ‘Design Patterns in Biblical Narrative’, shows most clearly where the authors are coming from—they are offering a theological reading of the whole texts, and claim unashamedly that the whole biblical narrative is a unity which points to and reaches its climax in the person of Jesus. Some will react against that, noting that it might not do justice to the diversity in the canon, and the points of theological tension and even contradiction found in the text. But their position is not one without some serious academic support.

A final video to note is one that grabbed my attention, and touches briefly on an important issue often neglected—the public reading of Scripture. It offers a quick overview of why public reading is important and how it features at key points in the biblical narrative, and gently suggests that simply reading the Bible together is an essential spiritual discipline.

The accompanying website includes further resources, including a regular podcast which explores background issues and questions of detailed interpretation in more depth. I have not listened to these, but I am told they are very interesting.

So, here’s the question: how are you going to make use of these in your context, to introduce people to the Bible, to encourage engagement, and to build understanding?

10 thoughts on “The Bible Project: a remarkable resource”