There continues to be discussion in the blogosphere about the lead codices which ‘could be Jesus’ diaries’—but informed comment is all heading in one direction.

Peter Thonemann has confirmed the account of his discussions with the Elkingtons. Thonemann sums up his judgement neatly:

The mystical kabbalistic inscriptions on Elkington’s copper codex turned out to be mechanical copies of a line from an ancient tombstone. It is as though it carried the words: “or not to be that is the question whether”. Now, if you were looking to produce a plausible-looking sequence of letters in an ancient language, you could do worse than to pop into the British Museum, pick a stone and copy the letter-shapes. I replied to Elkington informing him that this particular “codex” was a modern forgery, produced by a resident of Amman within the last fifty years or so.

But he also offers some reflections about the process by which these have received publicity:

One can hardly blame the newspapers: no editor could reasonably be expected to resist the combination of Jesus, the Kabbalah, mysterious death threats and a secret code. But it is a bit depressing that no one thought to consult any one of the dozens of British specialists in the field. As the Jewish Chronicle made clear when it originally reported on the find back in early March, those professional scholars who have had sight of these objects have dismissed them as obvious fakes. There are various reasons why we bother to fund research in the arts and humanities and this episode could have been one of them.

Thonemann is not the only one to find problems. The writing is a hotchpotch of different styles and scripts, and the lead pieces themselves have been deliberately aged in a crude way which reveals them as forgeries.

In the meantime, a video has surfaced of the Elkingtons on BBC News channel (I am not sure which day). This is clearly of interest in Jordan, as the Arabic subtitles on one version on YouTube demonstrate. 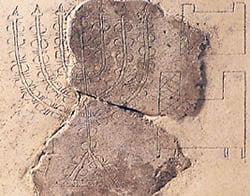 Thanks to John Byron for highlighting this. As John points out, most of the comment is speculative or nonsense or both. There is no evidence that there is any mention of Jesus or the crucifixion; the claim that these will be as important as the Dead Sea Scrolls is groundless; the one fact referred to (that it was forbidden to depict the menorah) is clearly wrong, as shown by representations found in Jewish homes near the Temple Mount (see picture). The idea that these could be used as ‘ID cards’ to admit people to worship seems bizarre, and David refers to something called ‘Hebrewism’ which I have never heard of (I think he means ‘Judaism’).

At a personal level, it appears that David Elkington has in fact no formal qualifications, but has left some unhappiness in his wake, as you can tell from a comment on my previous post on this, which seems to be echoed elsewhere on the internet.

So it looks like it is time to put this story to rest. But before we do, are there lessons to learn?

The lesson for Christians: ignore these kinds of sensational stories. They are without foundation, and anything which sounds exciting enough to win a publishing contract will likely have other motivations behind it.

The lesson for scholars: don’t say anything about anything without full access to the items in question. Oh, and by the way, check the CVs of any ‘scholar of religious archaelogy’ before you meet them.

The lesson for journalists: do please do your homework and, as Peter Thonemann points out, there are plenty of experts out there willing to give you a helping hand.

8 thoughts on “Sadly (mis)lead. Saying farewell to the codices”