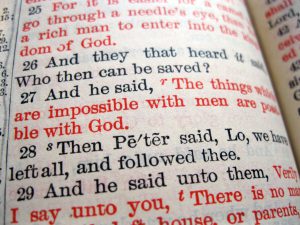 Following my previous observations about Tony Campolo no longer calling himself evangelical, Tony himself responded on Christian Today.

Every once in awhile unfair judgments are made. That was the case when Christian Today contributor Ian Paul wrote that I, along with other Red Letter Christians, emphasised the red letters in the New Testament, which in many Bibles highlight the words of Jesus, at the expense of the rest of Scripture.

I offered a response to this, which was not, in the end, published in Christian Today. There are quite important issues at stake in the claim that Jesus’ displaces Old Testament teaching, that Paul gives us our essential theology, whilst the gospels give us the lifestyle we should live, and that justice is the centre of the good news that Jesus proclaimed.

Every once in a while people get upset at being asked some difficult questions, and offer a response to set the record straight. But at times that response highlights the very issues that it aims to resist, and I think that was the case when Tony Campolo kindly responded to my comments last week.

In response to my observations about following the ‘red letters’ of Jesus’ teaching, Tony suggests that in Matthew 5, ‘Jesus declared that his commandments take precedence over what was written by the law givers of the Hebrew Bible.’ That’s quite an odd suggestion, given the nature of Jesus’ teaching here; far from displacing the teaching of the law, Jesus appears to be giving them renewed force. They do not merely regulate the outer, visible life, but also our inner life, which is known only to God and hidden from our neighbour. It is an even odder suggestion, given that in his temptations in the desert, Jesus quotes these ‘law givers’ as if they were writing the words of God himself, and earlier in Matthew 5 has been quite emphatic:

Do not think that I have come to abolish the law or the prophets…I tell you the truth, until heaven and earth pass away not the smallest letter or stroke of a letter will pass from the law until all has been accomplished (Matt 5.17–18).

It is no wonder that Jewish Matthew alone records a parable about his task as a Jewish follower of Jesus, holding on to both Old and New Testaments together as the treasury of the words of God:

Therefore every teacher of the law who has become a disciple in the kingdom of heaven is like the owner of a house who brings out of his storeroom new treasures as well as old (Matt 13.52).

We cannot read the Old Testament as if it was written to us, ignoring the cultural, historical and social gap between ourselves and those to whom it was first written. We are not nomadic subsistence farmers living in an iron-age warrior culture. Nor can we read the Old Testament as if Jesus had never lived and taught. But, like the writers of the New Testament, Jesus demands that the Old Testament is read through his interpretive lens, not displaced by him—it is still written for us. When we set the one against the other, we end up with real problems, as Tony’s comments illustrate.

First, he claims that ‘the Epistles give us our essential theology, while the Gospels define the lifestyle we are called to live out.’ Ironically, this has been a central plank of the evangelical tradition which Tony criticizes, but it doesn’t stand up to scrutiny. It was the teaching and action of Jesus recorded in the gospels, not least his resurrection, which gave rise to the worship of Jesus alongside the God of Israel (surely our ‘essential theology’) which we find in the epistles. And it is hard to read the closing chapters of (for example) Romans without seeing clear guidance on Christian lifestyle, parts of which are in striking parallel to the teaching of Jesus.

Secondly, Tony appears to squeeze Jesus’ teaching into his own concern for social justice, rather than the other way around. Jesus’ parable in Matthew 25 is not about Christians helping the poor; elsewhere in the gospel, Jesus uses the language of ‘these brothers (and sisters) of mine’ quite clearly to refer to his disciples, the ones who follow his teaching, and not the poor in general. This parable does indeed include radical and challenging teaching, but not quite of the kind that Tony suggests: if we follow Jesus, we might well end up hungry, thirsty, naked and a stranger, sick and in prison, and needing the help of ‘sheep’—those who respond to us with kindness, unaware of whom they are truly helping, members of the body of Christ.

Jesus is indeed concerned with justice, and Tony has over the years done evangelicals a great service in both teaching this and putting it into practice. But I wonder if he is in danger of forgetting where this justice flows from. According to Matthew (and the other gospel writers), it arises from Jesus’ preaching of ‘the kingdom of God, and his righteousness’ (Matt 6.33). For the Jewish Jesus, this righteousness includes loving God with all our heart, soul and strength (as those law-givers commanded) and our neighbours as ourselves (also from the law-givers). And in matters of marriage and sexuality, it means continuing to live in the creation order of male-female marriage—not (as Tony claims) as part of our spiritual actualization, but as a reflection of the creation pattern of Genesis 1 and 2—or living as celibate single people in anticipation of the new creation, as both Jesus and Paul did.

I am heartened to read Tony confess that ‘I still believe what evangelicals believe.’ If that is the case, I ask again, why ditch the name? If the term ‘Christian’ becomes misunderstood, would he drop that too? Why hand the term ‘evangelical’ over to be monopolized by those with ‘anti-feminist, homophobic, anti-environmentalist, militaristic, xenophobic views’? Such people need to be brought back to their evangelical confession—that we need constant reform of our views in the light of Scripture, which is the sole authority for Christian life and doctrine. It applies to them; it applies to me; and it applies to Tony’s commitment to social justice. If Tony is disowning the word, is he also rejecting this principle?

9 thoughts on “Resolving tensions in our reading of Scripture”