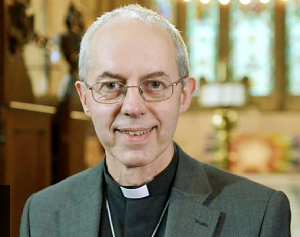 It is therefore appropriate to ask: what is the meaning of reconciliation in the New Testament? And what is the relation between the ‘upward’ and the ‘outward’ dimensions of reconciliation? This is an extract from a chapter I have written for a forthcoming book (due out in October). In the first part I look at reconciliation in Paul (particularly in Romans 5 and 2 Cor 5), and this section looks more widely in the gospels.

Reconciliation in the wider NT

If reconciliation is such a significant term in Paul, do we see this in other parts of the New Testament?

One of the striking things about the narratives of Jesus’ healings and deliverances is the way that restoration to wholeness is frequently followed by restoration of relationships and communities. In the brief account of Jesus healing Simon Peter’s mother-in-law (Mark 1.30–31), her restoration to her role in the household as host follows on from her physical healing. The man with a skin disease is likewise returned to his ritual community upon healing (Mark 1.40–44). The Gerasene demoniac, living on the outer fringes of human community when Jesus meets him, is not only delivered from demonic possession but is also restored to his own community: ‘Go home to your own people…’ (lit ‘to your household and your [people]…’ Mark 5.19).

This pattern is found across the gospels. In the carefully structured account of the raising of a widow’s son in Luke 7.11–17 (told in such a way as to echo Elijah’s similar action in 1 Kings 17), Jesus’ compassion stands at the numerical centre of the story.[1] The restoration is made explicit in Luke’s retelling: at the end of the miracle story, Jesus gives the boy back to his mother (v 15). In Jesus’ conversation with the woman at the well in John 4, the timing of the encounter has a literary/theological significance. The woman can see plainly who Jesus is in the broad light of day, in contrast to Nicodemus in the preceding chapter who still gropes with his questions in the evening twilight.[2] But also has a cultural/historical significance: her noon-time trip to the well also speaks of social rejection and marginalisation. Yet as soon as her eyes are opened as to who Jesus really is, she returns to the community that has rejected her with a passionate invitation: ‘Come, see a man who told me everything I ever did! Could this be the Messiah?’ (John 4.29).

But what is equally striking in the gospels is that this reconciliation and restoration of relationships also brings with it sharp division. The most demanding expression of this comes in Jesus’ saying in Matt 10.34–36:

Matthew locates this saying within a collection of Jesus’ sayings and teaching that he has gathered together, as is his habit. (The parallel in Luke 12.51–53 sits with other sayings.) It therefore needs to be distinguished from the material on future persecution (10.17–25, which has parallels in Matt 24, Mark 13 and Luke 21) that Matthew has blended in seamlessly to Jesus’ teaching about the present mission of those he is sending out now. In other words, this ‘division’ is not something unique to times of hardship; it is integral to our recognition of Jesus as God’s anointed one. This is made clear both by the preceding say (Matt 10.32–33) which introduces the notion of sharp distinction between those who do and do not acknowledge Jesus, and the use of the saying from Micah 7.6, widely interpreted to relate to the time of the coming Messiah. The irony of this is brought out by Matthew’s setting this saying in the context of a mission which was to proclaim ‘peace’:

Peacemaking is an essential part of the good life (5.9). But the way to peace is not the way of avoidance of conflict, and Jesus will be continuously engaged in robust controversy especially in chs 21–23, while his whole experience will be the opposite of a peaceful way of life. His followers can expect no less, and their mission to establish God’s peaceful rule can be accomplished only by sharing his experience of conflict.[3] 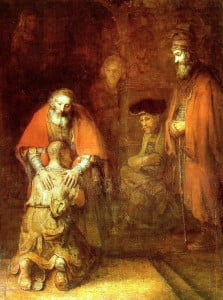 This paradox of reconciliation/peace and conflict/division is expressed in narrative form in the story of the ‘Prodigal Son’ in Luke 15.11–32. Although this parable is often taken as the quintessential expression of the gospel of God’s grace, there are some striking contrasts with the previous stories of ‘the lost’ that precede it. The father, whilst anxiously straining to look for the return of his son (usually inferred from v 20), he does not actually follow after him to seek him as the shepherd has sought his lost sheep (v 4) or the woman searching for her lost coin (v 8). In fact, the son is only restored because he has ‘come to his senses’ (v 17) and begun the journey home. There is material loss for the father as well as loss of dignity (in his running, v 20) and a forfeiting of his right to exact retribution on the son who, in asking for his share of the estate, was effectively wishing his father dead. In that sense, the story does not mesh easily with classic models of atonement.

It does, however, match the pattern of reconciliation that we have already seen. Though the son expresses his desire to accept the consequences of his action, it is the father who absorbs the cost and thereby effects the restoration of relationship, highlighted by the gift of robe and ring (v 22). And the second half of the story, the complaint of the elder son at his father’s generosity and forgiveness, is integral to the whole even though it is often treated as an appendix to the main story. Luke has structured this as a close parallel to the situation of Jesus, as he makes clear in verses 1 and 2. The ‘tax-collectors and sinners’ come near to listen to Jesus, whilst the Pharisees and scribes grumble about his acceptance of them; the younger son returns to the father and is accepted by him whilst the elder son stays in the field complaining. So the reconciliation that Jesus brings, at cost to himself, in breaking down division and forming a new, unified humanity, brings division between those who will accept this reconciliation and those who will not.

Joel Green sees the parable characterised in precisely these terms:

The younger son attempts to reconstrue their relationship as one of master/hired hand—a definition at odds with his father’s persistence in regarding him in filial terms. Accepting his status as son, he is reconciled to his father and restored as a member of the family.

Will [the scribes and Pharisees] identify with God’s will and, having done so, join repentant sinners at the table?… Or, refusing to embrace God’s gracious calculus, which works to include those who (re)turn to him, will they exclude themselves from the family of God?[4]

The Dynamics of Reconciliation

We therefore see the following dynamics at work in the New Testament’s exposition of reconciliation:

These dynamics shed light on particular examples of conflict and its resolution elsewhere in the NT. A key example is the difference between those teaching that Gentiles must be circumcised, and Paul and Barnabas (joined by Peter) opposing them in Acts 15. The division on the issue was sharp and significant: there was ‘no small dissention and debate’ (Acts 15.2) The process is instructive; after ‘much debate’, they listen to the key testimonies of Peter, Barnabas and Paul, and then James proposes a way forward with reference to what God has said in Scripture (albeit quoting the Septuagint rather than Hebrew text). And, as Richard Bauckham has demonstrated, the only requirements that are imposed on Gentiles joining the community of believers express a four-fold summary of the Holiness Code from Lev 17–26.[5] The intention of God as expressed in the Scriptures is the key reference point in resolving the conflict and effecting reconciliation.

Paul’s perspective on this issue in his letter to the Galatians illustrates the same dynamic of unity and division highlighted by Green’s comment on Luke 15. The reason why Paul sounds to polemical—antagonistic, even—is because he sees God’s inclusive invitation as under threat from those who would reject it by imposing additional requirements. This would make something other than reconciliation with God the basis of reconciliation between the two parties.[6]

We see the same dynamic at work from another perspective, that of James himself, in his circular letter.[7] Since God is one, in whom there is changing or turning (James 2.19, 1.17), then there must be unity in every aspect of the lives of believers. We cannot separate faith from action (2.14); we cannot speak with both good and harmful words (3.11); we cannot treat rich and poor in different ways (2.2); and we cannot tolerate conflict and disputes (4.1). Yet, into this vision of unified humanity (which sits most comfortably in the wisdom tradition) James introduces the theme of eschatological judgement and separation (5.1). God will judge those who reject the unity that he is and the unity that he brings.

Our differences cannot be resolved simply by attending to the two parties in conflict; they have to resolved with reference to a third point, the truth about the God to whom both these sides have been reconciled. That is the only effective grounds for mutual agreement.

[2] Perhaps the best exposition of the contrasts between John 3 and John 4 can be found in Stibbe, John

[5] Bauckham ‘James and the Gentiles’ in Witherington (ed), History, Literature, and Society in the Book of Acts pp 172–3. Bauckham argues that the first listing of these conditions in Acts 15.20 is a less accurate summary than the second listing in Luke’s version of the letter which is sent in Acts 15.29. See ibid p 183. For the significance of this specifically on the sexuality debate in the Church, see Goddard, God, Gentiles and Gay Christians.

[6] The previous consensus on Galatians, the ‘North Galatian hypothesis’, saw Paul’s letter as written to a group he has not visited, therefore written later and not connected with the Council of Jerusalem. The consensus now is the ‘South Galatian hypothesis’, that Paul is writing to the cities he visited in his early travels with Barnabas, so his visits to Jerusalem mentioned in Galatians correspond in some way to his visit in Acts 15. For further details see Paul, “Resolving Conflict in Galatians 2.”

[7] For a full discussion of authorship see Davids, Epistle of James pp 2–22