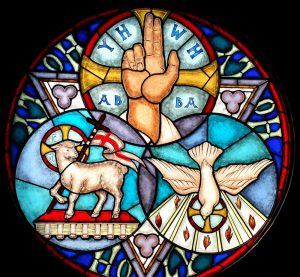 Here it comes again: that Sunday in the lectionary which most preachers dread or (to disguise this) suddenly think of guest preachers who need an opportunity to contribute their ministry. Yes, it is Trinity Sunday! Rather than offer you a sermon as a resource, I thought it would be helpful to point out three things I have previously offered here, and one from elsewhere which was rather entertaining and highly informative.

The first is my post from a couple of years ago, The Trinity is not our social programme, reflecting largely on Stephen Holmes’ excellent book on the Trinity, and in particular his correct rejection of the current trend to see in the life of the Trinity a model for human relations. His rejection is correct, since people who do this end up projecting their aspirations for society (either hierarchical or egalitarian) on the Trinity, and they forget that the ‘persons’ of the Trinity are not the same as human ‘persons’ who are separate centres of will.

Holmes points out that there is something of a problem in this way of moving from the relationships within the Trinity to relationship between people, as shown by the radically different conclusions theologians come to about the implications of this move.

For Zizioulas, the monarchy of the Father, as cause of the Son and the Spirit, leads to a monarchical view of the role of the bishop, and they strongly hierarchical, and tightly ordered, church. For Boff, perichoresis  is the decisive principle, and it is completely mutual and symmetrical. (p 26)

So the life of the Trinity is either egalitarian, or it is hierarchical, depending on your viewpoint. The sceptical reader might, at this point, wonder whether this doctrinal discussion is little more than a projection of the theologian’s prior viewpoint on to the blank screen of speculation about God’s inner life. But the discerning reader might also recognise Zizioulas’ hierarchical conclusion in another, rather surprising, context. Conservative evangelicals have also read hierarchy in the relationship between Father and Son, and since ‘the head of every woman is man, and the head of Christ is God’ (1 Cor 11.3) then the hierarchical ordering within the Trinity is expressed not so much in the specific hierarchy of the bishop over the people but generally in the hierarchy of men over women. In this way, debates about gender roles and women’s ordination are elevated to central questions about the nature of God, and are therefore ‘primary’. It is odd that this argument can ever be applied to ministry only, rather than to society in general, though perhaps not as odd as evangelicals being in logical debt to a Greek Orthodox bishop.

The second resource is the paper on the Trinity written by Kevin Giles, which offers an excellent reflection on the historic understanding of this teaching over against some other trends currently being pursued.

The Nicene Creed is the definitive account of the doctrine of the Trinity for more than two billion Christians. It is binding on all Roman Catholic, Eastern Orthodox, Anglican, Lutheran, Presbyterian and Reformed Christians. These 2 billion believers agree that anyone who denies what is taught in the Nicene Creed stands outside the catholic faith, and any community of Christians that rejects what the Nicene Creed teaches is by definition a sect of Christianity. On this basis, we do not accept Jehovah’s Witnesses as orthodox Christians because they cannot confess this creed, even though like us evangelicals they uphold the inerrancy of Scripture.

Be assured, I do not place this creed or any other creed or confession above Scripture in authority or on an equal basis with Scripture. For me, and for 2 billion Christians, this creed expresses what the church has agreed is the teaching of Scripture. I believe every single statement in this creed reflects what the Bible says or implies. In my view, we have in this creed the most authoritative interpretation of what Scripture teaches on the Father-Son relationship.

The third resource is my own reflection on what Revelation 4 and 5 tells us about the relation between the first and second persons of the Trinity.

The language of worship here does a remarkable thing in identifying the lamb as equal with the one on the throne in deserving of worship and adulation—in a text which implicitly refutes the claims of the human figures to be deserving of such obeisance. Because of this, it is reasonable to claim that it offers us the highest possible Christological understanding in the whole New Testament: what we can say of God in worship, we can say of Jesus. The two figures of the one seated on the throne and the lamb are thus characterised as God the creator and God the redeemer. These figures are never quite merged, and remain distinct within the narrative of Revelation and, unlike the association of the Word with the work of creation in John’s gospel, their roles also remain distinct. But in the final hymn of praise, the worship is given to the two as if they were one.

The placing of these scenes of heavenly worship following on from the royal proclamations to the assemblies in the seven cities has a powerful rhetorical impact. The followers of Jesus might be facing particular challenges and opportunities, located within their own cultural and physical contexts—yet the context for all their struggles is this cosmic vision of the praise of God and of the lamb. Where they might feel as though they are ‘swimming against the tide’ in terms of dissenting from the cultural norms of their society—in their participation in the trade guilds with their associated deities, in their moral stance, and in their reluctance to participate in the imperial cult—the juxtaposition of chapters 4 and 5 offers a startling reconfiguration of their world. All of creation is caught up, not in obeisance to the emperor, but in the worship of the God and Father of Jesus, and of the lamb, and any who are not taken up with this are, in fact, in the minority. It is an extraordinary cultural and spiritual counter-claim to the majority perception of reality. And in its emotive extravagance, this vision of worship is not offered as a rational fact, but as a compelling call for all readers to join in themselves.

The final resource is a list of tweets on the Trinity by Ben Myers, which he tweeted as he completed teaching a module on the Trinity. The whole list of 66 is well worth reading, and they are grouped under different headings. Here is the first group.

I.  HOW TO AVOID TRINITARIAN HERESY

#1. Start by abolishing Trinity Sunday, that fateful day on which preachers think they have to explain the Trinity

#2. Teach children to make the sign of the cross when they say the words “Father, Son and Holy Spirit”

#3. When someone offers to tell you the practical implications of the doctrine, just smile and move along

#4. Have you come up with a really helpful analogy of the trinity? Well done! Now please don’t tell anyone about it, ever

#5. The doctrine is not a mystery. It is simple & precise. The reality it points to is the mystery

#7. In this doctrine every word is used in a very limited way. Even the numbers 1 and 3 can’t be taken literally

#8. Don’t partake in meaningless debates about whether “oneness” or “threeness” is more important (see #7)

So, do enjoy preaching this Sunday. Don’t be a heretic; how about simply preaching on the passages set?

8 thoughts on “Preaching on Trinity Sunday”