I preached last night on Luke 2, noting that Luke nowhere says that Jesus was born in a stable. This is what I said:

I love this time of year. I know that they can be a burden at times, but I love the traditions that we associate with Christmas. There’s the reassurance of the familiar as we dive into the loft to drag out the box of decorations that we carefully put away last year, and hunt for the strings of lights that need to wind round the tree and down along the hall.

Some traditions are more memorable than others. It seems to have become a tradition in our house that we head to the flower shop at the end of our road, get excited about an oversized tree that has not been sold and so now is at an irresistible discount, lug it up the road puffing and panting, then find it is too big to fit in our living room. So I get out the saw to cut six inches off the end, with more puffing and panting, get distracted, allow the saw to bounce from the tree and land on my thumb, which leads to a dash to the kitchen to find the plasters and…well, you get the picture.

Since the arrival of our dog Barney, three years ago, we have added another tree tradition, which is to forget to close the living room door, and then have to work out which of the decorations Barney has jumped up and caught and chewed into an unrecognisable mess.

Traditions don’t just persist, they grow and develop. I’m not quite sure why, but the tradition of putting lights in the trees in your garden has taken off in the last few years, so that our street now looks like a fairground ride with all the flashing and blinking lights. We’re not ones to miss out, so I spent most of yesterday morning half way up a walnut tree disentangling 400 lights on a 25m wire. The shelves at Band Q have every kind of light—coloured, white, ice white and warm white, long and short, indoor and outdoor—all with eight different options for flashing, glowing and pulsating. It’s what Christmas is all about, apparently.

Traditions, like personal habits, are powerful things. The can give us a shared sense of participation, so we all have a contribution to make to the turning of the seasons. They connect us with the past—I will never forget when our youngest, Becca, was in a nativity play at her nursery school and was (hoorah!) playing the part of Mary, and when the narrator announced the birth of the baby Jesus, she reached down between her legs for the doll in a strikingly realistic way! But the connection with the past of our traditional annual rituals is what makes Christmas such a painful time for those amongst us who are bereaved, or who have difficult memories.

If we are honest, we need these traditions to give us reassurance. They reassure us that we are like other people. They reassure us that there are some things that don’t change (at least not too much) when we live in a world where change is faster, more alarming, and more dramatic every year. They offer us certainty in an uncertain world. With the EU referendum and the US Presidential election, we are ending 2016 in a position that no-one would have predicted. Our former MP, who lost his seat at the last election, just sent a message saying ‘let’s hope for a rather less exciting 2017!’ It might have been a year of personal challenge and change for you too. But for whatever reasons, traditions reassure us of stability, of somewhere still in a turbulent world. Woe betide you if you challenge cherished traditions!

But I wonder if that doesn’t give us a problem. At Christmas time, some of these traditions are so fixed that they contain and constrain the Jesus of the Christmas stories. The traditional nativity scene looks timeless, polished, quite neat and rather fixed. We get it out each year; we set it up; admire it; the we put it carefully away, perhaps wrapping the pieces and putting them back in their box. And life can go on as before. 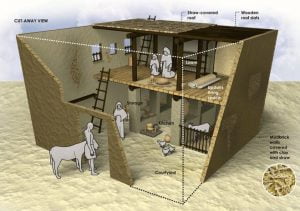 The problem is that that is not what Luke actually gives us in our reading. I wonder if you noticed a detail of our reading: ‘there was no space in the guestroom’. Even though it is firmly lodged in our traditions, Luke doesn’t point us to a ‘draughty stable with an open door’, because 2,000 years ago people kept their animals in their own home, not an outbuilding—not least because they couldn’t afford one. And Joseph and Mary didn’t go first to an ‘inn’; they were coming to their own family, and eastern hospitality wouldn’t have dreamed of doing anything but welcome them into the home, to a small guestroom built on the roof to take in visitors and family. Perhaps this guestroom was already occupied, or perhaps Luke is just telling us that the spare room is not big enough for a birthing mother along with those assisting her, so she needed to give birth in the main living area, the centre of the home, alongside the overnighting animals. So the natural place to lay the newborn is in the recess holding the animals hay—just as not so long ago we might have put a baby in a drawer—at the centre of the family’s living space and immediately part of their routine of daily life.

A friend of mine commented on this:

When I discovered this a year ago, it opened up a whole new perspective on what it means that Jesus came as one of us. Not hidden away in either that lowly stable or in the carefully prepared guest room (with it’s special “guest room” towels & bedding, in my own modern vision), but came into the world in the midst of the main living space with all it’s chaos and noise. Because of that, it’s easier to imagine him joining me in the chaos and noise of my everyday life, and not needing to take myself off to some totally luxury-denying place away from the world, or even a carefully prepared space (like a church) where everything is “just so” in order to meet him. He is truly Immanuel, God with us.

Now you might be feeling nervous about this Jesus driving a coach and horses through this bit of our cherished Christmas tradition—but it won’t be the last time that he does it. He goes on to overturn tables at the temple, to tell Bible teachers they don’t know their Bibles, and the religious purists that they’ve got it all wrong. Like them, we don’t want to let go of our traditions too quickly.

But as I think about it, I realise that this is just what I need—what we all need. The traditions and habits that we cling to don’t serve us very well, and don’t give us what we hoped they would. As a society, we have more and better food than we’ve ever had, yet we are getting less and less healthy. We have more wealth than before, yet we can’t overcome the division between rich and poor. We have better medication than ever, but we don’t know how to face death. Albert Einstein once said: ‘The definition of foolishness is doing the same thing and expecting a different result.’ If we just keep on doing the same old things—in our nation, in our communities, in our own lives—life isn’t going to get any better. Something needs to change.

The same is true for us as individuals. Many of us continue to live with pain from the past, and our habits haven’t brought us healing. We live with conflict, with others or within our selves, and we have found peace elusive. We wonder where our lives our going, and haven’t found a real sense of purpose. We live with wounds and hurts inflicted on us or that we have inflicted on others, and we long for forgiveness.

Just as 2,000 years ago Jesus burst on the scene and came right into the centre of the lives of those he met, we need him to do the same again for us. In one of his letters, the apostle Paul says something very odd: ‘I am in the pains of childbirth until Christ is formed in you’ (Gal 4.19). That idea is picked up in one of our best-known carols, ‘O little town of Bethlehem’ which ends:

O holy Child of Bethlehem
Descend to us, we pray
Cast out our sin and enter in
Be born in us today

The real wonder of Christmas isn’t in our traditions or our glittering lights. It isn’t just in the fact that Jesus, son of God, took human form and was born in Bethlehem 2,000 years ago. No, the real wonder is that is can be ‘born in us today’—that he can bring his healing, his peace, his purpose and his forgiveness into our lives—if, just as they did in Bethlehem, we will make space to welcome him this Christmas.

10 thoughts on “Preaching Christmas without a Stable”