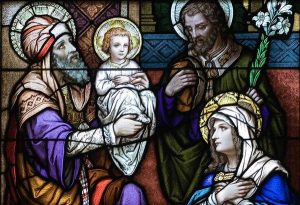 Andrew Talbert writes: Though we are now several weeks past the Presentation of Christ at the Temple (2 February), it is worth revisiting this event as it appears in Luke’s Gospel for several reasons. First, Ian Paul has a mild obsession with numbers in the New Testament, and this particular blog is all about numbers; and, secondly, focusing on this passage briefly can help us to be more attentive readers of Scripture. The larger purpose of the infancy narrative in Luke is to instill in the hearers of his gospel a prophetic certainty that this Jesus is the expected Messiah. BEFORE YOU LEAVE this page for what seems like an obvious point, however, Luke achieves this in a manner that few have observed— John the Baptist as the forerunner according to a certain numerical scheme of chronology.

In his shortest of three books on Jesus of Nazareth, Ratzinger briefly draws attention to two primary prophets in the background of the infancy narrative of Luke: Malachi; and Daniel (pp 23–24). Different from Matthew, who quotes Isa 40:3 to denote John as the forerunner (Matt 3:3; cf. Mark 1:3), and then later clarifies he is “Elijah who is to come” after a visit from John’s disciples (11:14) and the transfiguration (17:11–12; cf. Mark 9:11–12), Luke draws attention to this dimension of John’s ministry before his life begins through the words of Gabriel, who visits John’s father Zechariah in the temple (Luke 1:17, 19). Though not without the resonances of Isa 40:3, Luke directs us specifically to the expectation of Malachi that this forerunner will go before the Lord “in the spirit and power of Elijah, to turn the hearts of the fathers to the children… make ready for the Lord a people prepared” (Mal 4:6, 3). Sirach reiterates this expectation of Elijah and this mission (48:1–10) along with the Qumran community (4Q521 2.iii.1–2).

Interestingly, Gabriel is the one who alludes to the Malachic expectation, but his appearance should draw the mind to the only other place he appears in the Bible: Daniel 8 and 9. The latter chapter is of primary interest to Luke in the infancy narrative because of the connection between Gabriel’s appearance at the Temple to Daniel and Zechariah (Luke 1:8–12), and the messianic fervor that characterize Zechariah’s time flowing in part from a reading of Daniel’s seventy weeks (Daniel 9:24–27).

It is worth reviewing the content of Daniel 9 to recognize the hermeneutical pressure this exerts on Luke’s understanding of John the Baptist and his cousin, Jesus. For the first 19 verses, Daniel reflects on his understanding of seventy years to end the desolation of Jerusalem, prays for God to turn away his wrath, confesses the sin of his people, implores for forgiveness, and seeks the restoration of the sanctuary. At this point Gabriel appears to announce God has heard Daniel and exhorts him to understand the vision: seventy weeks have been decreed “to finish the transgression, to put an end to sin, and to atone for iniquity, to bring an everlasting righteousness, to seal both vision and prophet, and to anoint a most holy place” (Dan 9:24). Gabriel proceeds to announce the coming of an anointed one (i.e. “messiah”) at the beginning of those seventy weeks for a period, followed by tribulation, abominations, and, presumably, the coming of the promises noted in Dan 9:24 after these seventy weeks. Traditionally, these seventy weeks have been interpreted in light of the seventy years mentioned at Dan 9:2, to mean that seventy weeks of years must pass before the restoration of the people of Israel. That is to say, seventy years times seven, or 490 years, a figure common in apocalyptic and eschatological Jewish texts from after Daniel’s time (e.g. Jubilees and 11Q13 2.19–21), after which the Messiah is to arrive.

It is with this expectation of 70 weeks, however, that Luke does something different and we come to the interesting bit of this blog (“At last!” you say). Ratzinger, following commentator René Laurentin (Structure et Theologie de Luc I-II. Paris: Librairie Lecoffre, 1957), notes Luke’s intentional observances of specific time that elapses from the pregnancy of Elizabeth to the presentation of Jesus at the Temple. After conceiving, Elizabeth remains hidden for five months (Luke 1:24); in the sixth month, Gabriel visits Mary and she conceives (Luke 1:26); Mary remains with Elizabeth for three months (Luke 1:56); eight days after his birth, Jesus is circumcised (Luke 2:21); and the holy family goes up to Jerusalem when the “time came for their purification” (Luke 2:22) to present Jesus at the Temple, which, according to Lev 12:4 is 33 days after the circumcision of the male child. Luke draws attention to these times unlike any other time period in his gospel, which are largely generic (excluding Jesus’ discussion of his resurrection: Luke 9:22; 13:32, 18:33).

Taking the key times and converting them into days (assuming 30-day months), we have 180 (6 months), 270 (9 months of pregnancy), 8 (for circumcision), and 33 (for purification) for a grand total of: 491, or 70 weeks and one day. John the Baptist, as the forerunner Elijah, initiates the 70 weeks of expectation before the arrival of the Messiah, who appears in the temple on the very day (according to Luke’s calculation) after these weeks have come to a conclusion. Jesus’ presentation marks the end of transgression and sin, the atonement for iniquity, who brings an everlasting righteousness, and perhaps is the anointed most holy place (or “holy one”; Dan 9:24).

“Ok, so what do we do with this?” you might ask. Thank you for the question. First, this reading simply enhances theological realities of which many were already aware: the kingdom of God and his righteousness are inaugurated with the arrival of Jesus—though, in this case, it places the inauguration further back than Jesus’ announcement at the beginning of his ministry. In fact, Luke omits the announcement that begins his ministry, “The kingdom of heaven is at hand” (cf. Matt 4:17; Mark 1:14) and simply refers to his need to proclaim it and help people see that it is near (cf. Luke 4:43, 6:20, 8:1, etc.).

Secondly, and differently from affirming what Christians already know of the Messiah and his kingdom, this attention to the arrival of the Messiah and his righteousness in the incarnation should give Protestants pause to more carefully attend to the birth of God the Son and its implications as our Catholic and Orthodox brothers and sisters do. That is to say, under the influence of Paul, we are so quick to get to the crucifixion and resurrection to deal with sin, that we can too easily overlook the significance of the incarnation that Luke and Matthew want us to see: the redemption of human nature and the taking of humanity into the Godhead, which enables us to share in God’s glory (John 17:22–24; Col 1:26–27; 2 Tim 2:10; Heb 2:10) and to be “partakers of the divine nature” (2 Pet 1:4). Something new is happening after these 70 weeks. In another work, Ratzinger emphasizes the correctness and historical longevity of the “theology of the cross” that focuses on sin, atonement, and salvation, the activity of God in Christ, and that made a “decisive breakthrough in thought of the Reformers.” This compares with a theology of the incarnation, which “talks of ‘being’ and centers around the fact that here a man is God and… at the same time God is man… All the individual events that followed [the incarnation] pale before this one event of the oneness of man and God” and, therefore the key feature of a theology of the incarnation is “in making progress toward the convergence of man and God.” Ratzinger follows this with the ecumenical insistence that both of these theologies are correct and complementary, yet need to be brought together without a simple synthesis (Introduction to Christianity: 2nd Edition (Ignatius Press, 2004), 229–30.)

Fourthly, this reading of Daniel, Malachi, and Luke makes difficult the part of the dispensationalist theology so prevalent in my home country of America. This perspective holds that the seventy weeks begin with the incarnation of Christ, his death in the sixty-ninth week, and his Second Advent sometime in the future culminating in the overthrow of the Antichrist in the final week (Mal Couch, ed., Dictionary of Premillennial Theology (Grand Rapids: Kregel Publications, 1996), 77). Though historical interpreters (e.g. Jerome or John Calvin) might be easily dismissed as having missed the point of the seventy weeks, dismissing Luke causes a host of difficulties in the realm of biblical authority.

Lastly, and in keeping with the stated goal of this blog— to make us better readers of the Bible— this reading encourages us to pay attention to the oddities of the scriptures. If an author goes out of his way to mention something, or to disrupt the flow of the narrative, or to add an aside, or to say something that chaffs our theological sensibilities, or to describe a scene vividly, take the time to explore the passage and attend to the details.

Andrew Talbert completed his PhD in New Testament interpretation at the University of Nottingham and taught for several years in Indonesia before returning to his native United States.