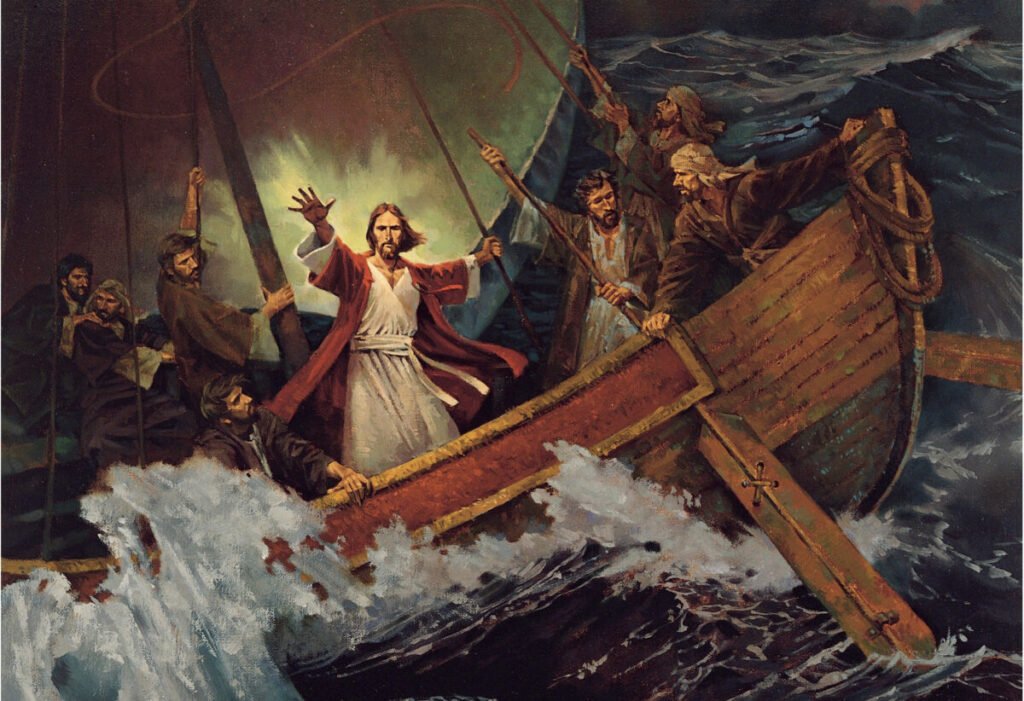 The Sunday gospel lectionary reading for the Second Sunday before Lent in Year C is Luke 8.22–25, the concise account by Luke of Jesus stilling the storm. (It is worth noting that the ecumenical lectionary has a different set of readings; apparently for the Church of England it was thought that there was not enough focus on Creation, so the readings for Sexagesima were restored, though without using that name.)

The place of the story in Luke largely follows its place in Mark 4.35–41; in both it follows Jesus’ parable about parables, the parable of the sower scattering the seed on four different kinds of ground, together with its interpretation, and in both it is followed by the deliverance of the man possessed by ‘Legion’, and the healing of the woman with the issue of blood with the raising of Jairus’ daughter. The discussion of Jesus’ true relatives came before the parable of the sower in Mark 3.31–35, but Luke locates it, in shortened form, immediately before the storm.

The parallel in Matt 8.24–27 is located in Matthew’s section of ministry and discipleship stories in chapters 8 to 9, so is followed by the deliverance in the Gadarenes, but the parable of the sower is now found in Matthew’s ‘kingdom parables’ in chapter 13. The question about Jesus’ true relatives comes in chapter 12.

As usual, it is a good exercise to put the three Synoptic accounts together, so that we can see the differences in wording and emphasis.

We can see straight away that Matthew’s account is quite abbreviated; he has removed the introductory context-setting in order to put it into his sequence of stories; and he has changed the order of events, so that Jesus’ rebuke comes before the calming of the storm, where in Mark and Luke it comes after.

All this might make us feel we are short-changed, in that Mark offers us some compelling narrative detail. But the effect in Luke is to focus less on the details of the incident, and more on its wider application—not least shifting the emphasis onto the response of the disciples.

Despite Luke’s characteristic brevity in describing the events, he actually brings out a number of things of significance in telling the story.

First, at every point he emphasises the seriousness of the storm and the seriousness of the situation of the disciples. Rather than simply describing the danger, he names it, and almost gives a sense of the intent of the storm in destroying the boat by mentioning the ‘raging waves’ in v 24. (Interestingly, the term is used in James 1.6 as a metaphor for doubts that assail and undermine faith…) In Mark, the disciples complain to Jesus about his apparent lack of concern that they might perish; in Luke (with Matthew following), they are perishing!

Secondly, Luke depicts not merely a storm on the lake, but a malevolent attack on Jesus and the disciples. The whirlwind (λαῖλαψ) does not merely ‘arise’ but ‘comes down’ on them; it is just such a whirlwind that, in the sovereignty of God, brings disaster on the nations (Jer 32.32), but it is also ‘out of the whirlwind’ that God speaks to Job (Job 38.1). Jesus not only ‘rebukes’ the wind, but in the recollection of the disciples he ‘commands’ them as though they were personal agencies.

Joel Green (NICNT, p 331) highlights the connections between this story in Luke and the one that follows—the exorcism of the Gerasene demoniac:

Depicting the raging sea as a metaphor for the forces of evil and chaos arising at three important points of the OT narrative. Firstly, it is over the dark and chaotic deep that the Spirit of God hovers and brings order and light out of chaos and darkness. Secondly, this idea is revisited within the narrative, sometimes in reference to God’s continuing acts in history as he rescues and protects his people (see for example Ps 74.12–18 and Ps 89.8–10 ‘Who is like you, Lord God Almighty? You rule over the surging sea; when its wave mount up, you still them…’). Thirdly, in apocalyptic texts, the raging nations are depicted as stormy seas, out of which arise the beasts who defy the power of God (see Daniel 7). God’s coming in eschatological judgement involves calming of those seas, and ultimately eliminating them (Rev 21.1) so that, not only is evil dealt with, but the possibility of evil is itself done away with.

Jesus’ calming of the sea is a demonstration of his divine power and a foreshadowing of the world to come (Mikeal Parsons, Paideia, p 138).

Thirdly, then, Jesus’ calming of the storm becomes both a Christological and eschatological demonstration of his authority and power. (Although the term ‘power’ is not mentioned in this narrative, it is a particular interest of Luke’s in other places.) Where Mark postpones mention of Jesus being asleep till later in his account, in order to create a sense of narrative tension, Luke mentions this up front to create a contrast between Jesus and the forces of chaos.

The detail of Jesus asleep in the boat is an important element in Luke’s portrayal of Jesus exercising his divine sovereignty over the forces of evil and chaos (Parsons, loc cit).

Jesus is appealed to as ‘Master’, ἐπιστάτης, by the disciples, a person of high status who is leader or commander over an organisation or one who leads and teaches others. Unique to Luke, it is the title given to Jesus by the disciples (Luke 5.5, 8.24, 45, 9.33, 49, 17.13) but has a particular poignancy here. Jesus is not only the true commander of the boat, but the commander over the forces that threaten it. It is his word of rebuke and command that brings peace and order to the chaos and threat.

Jesus is not a simply manipulating the elements into a more favourable weather pattern; he is engaging demonic powers and demonstrating his authority over them (Parsons, loc cit).

Jesus’ companions in the boat react as they would to a theophany, with fear; but their amazement, followed by their uncertainty about Jesus’s identity, indicates that they do not yet fathom what they have seen. They have had their first test (Luke 8.13) and have not performed well (Green, p 334)

Those who have been called to be his disciples are now revealed to be clueless regarding the true identity of Jesus. He is sovereign over wind and sea; he is Lord over evil and chaos (Parsons loc cit).

The disciples’ journey of faith started well enough, with a decisive break and a commitment to follow Jesus. But this episode tells us that the journey has a long way to go…

You can find conversation about and reflection on this post in our discussion video here:

If you are preaching on Genesis 2 or Revelation 4, rather than the gospel reading, you might be interested in my post on those passages from three years ago.

(Genesis 2) Given that Yahweh is greater than his people, might this suggest the woman’s superiority over the man? Is she greater than him? This is where attention to the other part of the phrase is important. The woman is a helper ‘suitable for him.’ ‘Suitable’ renders a unique term in the Old Testament that is made up of two prepositions; the first most commonly means ‘like,’ whilst the second means something like ‘opposite’ or ‘in front of.’ The compound here suggests that the woman is different from the adam and yet goes with him. She is not greater than him but in some way complements and completes him, much as two banks of a river are equal and opposite. Thus the NET version of the Bible translates this phrase: ‘I will make a companion for him who corresponds to him.’ In creation, neither is greater than the other, but where Genesis 1 emphasizes their equal regency over creation, Genesis 2 emphasizes their distinctiveness. Together, both chapters point to equality in creation…

(Revelation 4) John here offers a dazzling vision of God which pushes the boundaries of human imagination in its metaphorical description. John’s own language reflects this; in contrast with what has come before, he now repeatedly reaches for ‘as’ and ‘was like’ and ‘had the appearance of.’ As elsewhere in Scripture, literal description of God is not possible; God is unknowable even though he has graciously revealed himself to us. Even John’s grammar appears to reflect this; the throne itself is described without using finite verbs, and all in the nominative case, but when John turns to the things around the throne, he moves into the accusative case. Even if some features of this heavenly scene can be described as objects that John can see and apprehend, the throne and the one seated there are not objects to be perceived and analysed.

11 thoughts on “Jesus stills the storm in Luke 8”