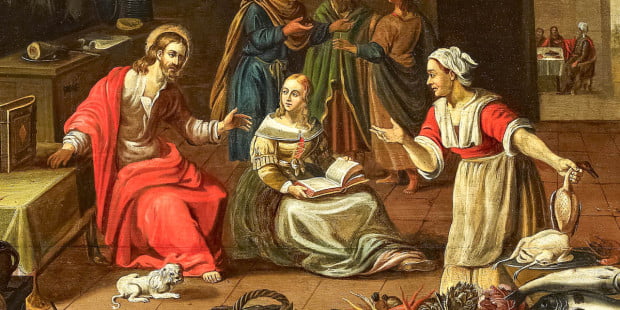 The short stories told by and about Jesus in the gospels are both attractive and challenging. They are attractive because they are easily memorable (and there is a basic neuroscientific connection between story and memory), because even in their compressed retelling they include compelling characters, and because we are drawn to Jesus’ pithy summaries of what we are to learn from these narratives (‘Go thou and do likewise’, ‘Mary has chosen the better part’ and so on). Yet they are also problematic, since the stories are set in a culture that has, in many respects, a different outlook from ours and a different set of values, and the lessons are often implicit rather than explicit. This means that we can easily misinterpret what is being said; we can get locked into a tradition of interpretation which isn’t actually faithful to the text; and we can use the story to suit our own agenda. (I read a sermon last week on the Parable of the ‘Good’ Samaritan, and it turned out that the point of the narrative was to be inclusive and liberal, rather than being like those unpleasant narrow biblical scholars; you might be able to infer from that the beliefs of the preacher!).

This is especially true of the lectionary gospel reading for Trinity 5 in Year C, the very short narrative of Jesus at the home of Mary and Martha. The Wikipedia entry on this story nicely summarises the dominant interpretive tradition:

Mary chose listening to the teachings of Jesus over helping her sister prepare food. Jesus responded that she was right because only one thing is needed, “one thing” apparently meaning listening to the teachings of Jesus… To simplify, this is frequently interpreted as spiritual values being more important than material business, such as preparation of food.

There are many practical problems with this reading (who is going to move the chairs and tables after the Sunday service?) as well as personal ones (can I really justify my laziness by saying I was listening to Jesus?) and there has been some push back against this idea, one of the most interesting being Rudyard Kipling’s poem ‘The Sons of Martha‘ which celebrates those engaged in practical service, which concludes:

And the Sons of Mary smile and are blessed — they know the angels are on their side.
They know in them is the Grace confessed, and for them are the Mercies multiplied.
They sit at the Feet — they hear the Word — they see how truly the Promise Runs:
They have cast their burden upon the Lord, and — the Lord He lays it on Martha’s Sons.

Moreover, there is good research evidence which shows that Christians both feel they are expressing their faith most clearly when involved in practical action, and that this helps them learn and grow as disciples.

And Joel Green, in his NIC Commentary on Luke (p 433) rejects this tradition, since ‘the interests of this brief narrative unit lie elsewhere’ and Luke’s narrative is ‘manifestly concerned with the motif of hospitality’. There are, in fact, textual, contextual, and canonical reasons for reading the text differently.

The passage begins with ‘Now, as they went on their way…’. We need to infer who ‘they’ are, and some ETs (such as TNIV) make this explicit (‘Jesus and his disciples’) even though Luke’s text does not specify this. The idea of being ‘on the way’ is typical of this long section of Luke’s gospel, until the entrance into Jerusalem on Cloak Sunday (no palms in Luke!) and connects back to the beginning of this material in Luke 9.51. But there is also a connection with the preceding episode about the Good Samaritan, where the practical context was the danger of journeying and the importance of help and hospitality.

As is typical of many gospel stories, the disciples rapidly disappear from view as ‘he [ETs supply ‘Jesus’] entered a certain village.’ We know from John 11.1 that this village was Bethany, which is near Jerusalem, and there is no reason to think that Luke’s and John’s descriptions of Mary and Martha and their household are distinct, contradictory or imagined. The different characterisations of the two sisters in the quite different episodes actually correlate well. Neither is there any need to be concerned about the selective nature of each story (where is Lazarus in this account?), since we know that each gospel writer is highly selective in what they recount (why does only Luke tell the story of the raising of the widows’ son in Nain?). But what is clear is that Luke is taking this event out of order; we are a long way from Jerusalem in Luke’s narrative of ‘the Way’, and yet Bethany is only a couple of miles from Jerusalem. For Luke, the controlling theme is questions of discipleship, rather than an interest in chronology. The idea of ‘entering a village’ whilst involved in the proclamation of the kingdom is reminiscent of the sending of the 12 and the 72 in Luke 9.6 and Luke 10.8.

The name ‘Martha’ comes from the Aramaic marah meaning ‘mistress’ or ‘lady’, and is the feminine form of the term mar meaning ‘Master’ or ‘Lord’, as in maranatha (‘Our Lord, come!’ 1 Cor 16.22). It is therefore not surprising that she is mentioned first, before the much more common name of Mary (I think Richard Bauckham suggests that about 25% of women that we know of in the first century were called ‘Mary’, Miriam). As would be expected in this culture, welcome and hospitality comes at the initiative of the one doing the welcoming, rather (as we might assume) in response to the initiative of the one seeking hospitality. Luke here uses an almost technical term for ‘welcome’, one that recurs when Zacchaeus welcomes Jesus into his home in Luke 19.6. Martha here is functioning as the ‘person of peace’ (Luke 10.6) in receiving Jesus in this way. Luke has a particular interest in hospitality, as we have already seen in Luke 7.36; it occurs frequently in Acts, where hospitality and the welcoming of others into the home is not only a normal part of culture, but is also the way that the gospel spreads and grows.

Martha’s sister Mary is introduced abruptly, and in ‘sitting at [Jesus’] feet’ she is adopting the posture of a disciple in relation to a rabbi; being seated is the traditional Jewish posture for teaching (Matt 5.1–2), hence bishops having ‘cathedrals’ name after the kathedra, the seat from which they teach. Although this is not completely without precedent, it contradicts the normal first century Jewish expectations of the role of women; they would learn the Torah in relation to their domestic roles, but that learning would usually come through other women, in particular, their mother. Jesus welcome of women as well as men into the circle of his disciples is distinctive and counter-cultural; it is a feature of Luke (who emphasises the role of women, see Luke 8.1–3 and the role of Priscilla in Acts 18) but it is also found in the other gospels, most notably Jesus’ description of ‘his brothers and sisters‘ as those who listen to his teaching and obey it in Matt 12.50.

Jesus is referred to three times as ‘Lord’ (in verses 39, 40 and 41); again, this is a distinctive of Luke and has important Christological implications, since the term is not simply one of respect (‘Sir’) but implies that Jesus’ teaching is the teaching of God which must be heard and obeyed. The contrast is commonly inferred between Mary’s listening and Martha’s activity in offering practical hospitality, but that is not really the contrast that Luke is pointing us to. After all, in the preceding parable, Jesus has emphasised the importance of practical care as the test of love of God and neighbour. And in the text, the issue is not the activity so much as the focus. Luke tells us that Martha is ‘distracted’ and Jesus observes that she is ‘anxious and troubled’, and we can begin to see why in her request. Her concern is with ‘me’—’Mary has left me…tell her to help me‘—rather than her focus being in attending to her guest, Jesus. The real contrast here is between distraction caused by the ‘many’ rather than focus on the ‘one’.

It is difficult too imagine that the authorial audience would understand Jesus’ praise of Mary to be an implicit criticism of Martha’s hospitality, a point underscored by the repetition of Martha’s name..a rhetorical device used to indicate compassion or pity…

The saying is less a condemnation of Martha’s frenzied activity and more a commendation of Mary’s posture as a disciple.

The welcome Jesus seeks is not epitomised in distracted, worrisome domestic performance, but in attending to this guest whose very presence is a disclosure of the divine plan…

With Jesus’ presence the world is being reconstituted, with the result that (1) Mary (and with her, those of low status accustomed to living on the margins of society) need no longer be defined by socially determined roles; and, more importantly in this co-text (2) Mary and Martha (and, with them, all) must understand nd act on the priority of attending to the guest before them, extending to Jesus and his messengers the sort of welcome in which the authentic hearing of discipleship is integral.

There is a rather nice reflection on the consequences of this on the Catholic website Aleteia:

So how will I treat Jesus when he sits at my table this holiday?  Will I ignore him in favor of basting the turkey?

I hope not. I hope to sit down and take in his beautiful face. I hope to spoon him the mashed potatoes that have been sitting in my crockpot since that morning because even if I’m not a natural Martha or Mary, I’m faking it all the way. Of course, “Mary chose the better part when she chose [Christ]” but since I want food on the table when my guests arrive I’ll agree with Cardinal Anastasio Ballestrero, the former archbishop of Turin:  “In our house there is room for Martha and room for Mary, and we must occupy both places. We must be Mary because we are welcoming the Word, and we must be Martha because we are receiving the Son of Man.”

So the chairs and tables do still need putting away, and the practical help of neighbour needs to be done—but they all need to focus on the One in whose name we do them.

52 thoughts on “Is the devotion of Mary better than the service of Martha in Luke 10?”