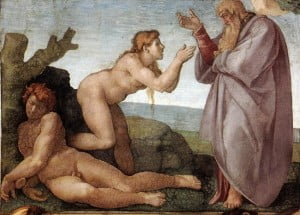 My colleague David Firth has kindly offered to contribute the section on Genesis 2.4–25:

It is apparent that we have a parallel creation passage here. Although there are differences in the order of events with Genesis 1:1 – 2:3, it seems that we are intended to read each passage in light of the other. That is, their differences are an important means for directing us on how to interpret each one. For example, humans are given authority to ‘subdue’ the earth and ‘have dominion’ over all living creatures (1:28). We could read this as a blanket right to take all we want from creation, except that in 2:15 we read that the adam was placed in the Garden to ‘tend it and keep it.’ These are verbs of protection and nurture, and so we see that subduing is achieved through positive care. Conversely, if we only had Genesis 2:15, we might think that humans have only a lowly role – a gardener and nothing more – when in fact we have dominion over creation. These two accounts, though different in many ways, inform our understanding of what it means to be human and how we relate to the rest of creation.

Where Genesis 1:27 has adam as male and female from the outset, this is not the case with Genesis 2:4 – 25. Here, we have the adam formed by Yahweh God from the dust and placed in the garden. But it is only in light of the announcement that ‘it is not good for the adam to be alone’ (2:18) that we clearly have a movement towards a distinction between male and female. Because of this it has been argued that the adam here is not gendered until we have male and female in 2:21 – 24. Although this is an intriguing possibility, it is more likely that the narrative considers the adam as male, so that the woman is created as his companion.[1]

That the human created from the dust is male from the outset is probable when we consider how the companion is described as a ‘helper suitable for him.’ Careful attention to each word of this phrase is vital if we are to understand the relationship between male and female here. What we will see is that even though there is probably an order of creation where the female is created later, there is no hierarchy as a result of this. Instead, there is a fundamental equality between male and female in creation.

The woman is described as a ‘helper’ (ezer) for the man. In English, ‘helper’ often means something like ‘assistant’, someone of lesser status. Helpers might be important, but more often than not this is only because there is someone else who is more important with whom they are associated. The noun occurs some twenty times in the Old Testament. In thirteen of these it describes God in relation to his people, frequently in terms of his ability to save them. Hence, while pleading for urgent action, the psalmist addresses Yahweh and says ‘You are my help (ezer) and my deliverer’ (Ps 70:5). The poet here clearly recognises that Yahweh is greater because it is Yahweh who can deliver, not the psalmist. Whatever else we might say then, it is clear that the woman is not assigned a lower status because she is called a ‘helper.’

Given that Yahweh is clearly greater than his people, might this suggest the woman’s superiority over the man? Is she greater than him? Is the fridge magnet that proclaims ‘When God created man he was only practising’ right? This is where attention to the other part of the phrase is important. The woman is a helper ‘suitable for him.’ In passing it is worth noting that the ‘him’ here probably presumes that the adam was a male, though this is not conclusive since adam is a masculine noun. More important is the word ‘suitable.’ This renders a unique term in the Old Testament that is made up of two prepositions. The first most commonly means ‘like’, whilst the second means something like ‘opposite’ or ‘in front of.’ The compound here therefore suggests that the woman is different from the adam and yet goes with him. She is not greater than him but in some way complements and completes him. Where none of the animals could resolve the problem of the adam being alone, that the woman complements him is what makes her a suitable helper. In creation, neither is greater than the other, but where Genesis 1 emphasises their equal regency over creation, Genesis 2 emphasises their distinctiveness. In spite of this, both chapters point to equality in creation.

It might be objected that the adam’s earlier naming of the animals emphasises his authority over them, and that when God brings the woman to him (at which point we can truly speak of man and woman) he also names her (2:23). Does this not suggest authority? However, we should note that there is an important distinction drawn with the naming of the animals (2:19 – 20). Not only were none of these a suitable helper, but a very different phrase is used in 2:23. Previously, the man has granted each animal a name but here the man does not grant a name to the woman but rather recognises who she is as ‘woman,’ as one taken from ‘man.’ Although Genesis 2 brings different perspectives from those in Genesis 1, it also affirms the equality of male and female.